10 things to do in L.A. for Super Bowl week, from free to fancy 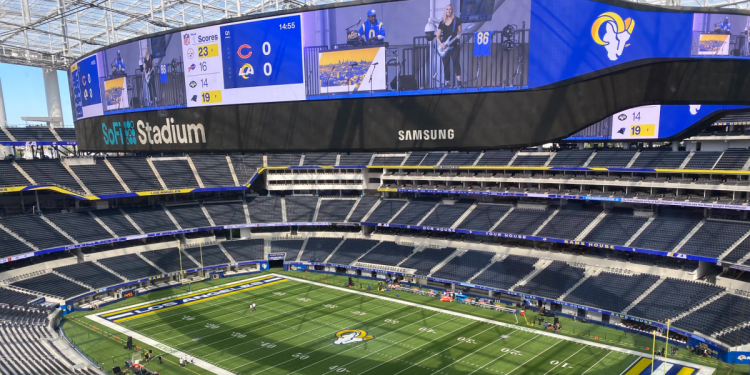 
The Super Bowl is coming to Los Angeles, and with it a laundry list of parties, concerts and “experiences.”

Football’s biggest night will take place at Inglewood’s SoFi Stadium, featuring the Los Angeles Rams and the Cincinnati Bengals. (The Rams are technically the visiting team, as the official “host” rotates each year between the AFC and NFC.)

Tickets for the big game are going for an average of $9,249 — and that’s not including parking, which could set you back another several thousand dollars. If you’re looking for a (relatively) cheaper way to get in on the festivities, we’ve got your roundup of Super Bowl week events, sorted from free to big ticket.

The city of Inglewood will host a free, three-day festival on Market Street featuring music, food, vendors and more. Performers include Poncho Sanchez, Tony! Toni! Tone! and TeaMarrr, and “Insecure” creator Issa Rae will receive the key to the city on Feb. 12.

This interactive football theme park gives you the chance to show off your skills on the gridiron and grab a few autographs in the process. The family-friendly event will be open this Saturday and Sunday, and again Feb. 10-12 at the Los Angeles Convention Center.

Tickets start at $20 for adults, and kids 12 and under can get in for free.

After a nearly two-year closure due to the pandemic, historic downtown food and drink emporium Clifton’s Republic is set to open its doors for Super Bowl weekend. The Broadway landmark will be open Feb. 11 and 12 from 9 p.m. to 2 a.m., and from 5 p.m. to close on Super Bowl Sunday.

Clifton’s will not be taking reservations at this time, so early arrival is highly suggested.

The powerhouse beer company will take over Crypto.com Arena for three nights of music. Halsey and Machine Gun Kelly will headline Feb. 10, and Blake Shelton, Gwen Stefani and Mickey Guyton will put on a show Feb. 11. Green Day and Miley Cyrus will close out the festivities Feb. 12.

Meek Mill, Diplo, Gunna and more will perform at the 2022 Hall of Fame Party presented by Animal Concerts and Segi TV. The event will occupy Sunset Room Hollywood on Feb. 12, featuring two stages, multiple bars and plenty of room to dance.

General admission tickets start at $150 and are available here.

Art ’N’ the Bowl will bring together the sports and art worlds at E.K. Art Gallery on Feb. 10. NFL Hall of Famers Andre Reed and Terrell Davis, with former Pro Bowl player Greg Bell, will host the event, which features a red carpet, silent and live auctions, and an appearance by Grammy winner Norman Brown.

Tickets are $150 and are available here.

Shaq — or DJ Diesel — will bring his annual carnival-themed bonanza to the Shrine Auditorium & Expo Hall Feb. 11. In addition to a DJ set from the Laker legend, the night will contain performances by Lil Wayne and Zedd, with food catered by Roscoe’s Chicken N Waffles, Pink’s Hot Dogs and more.

Tickets start at $399 and will include six hours of open bar, gourmet bites from various restaurants and access to the Carnival Midway.

After a coronavirus-induced hiatus, Sports Illustrated’s annual Super Bowl Party will take place Feb. 12 at Century Park. Kygo, Jack Harlow and more will take the stage. Your VIP ticket will get you five hours of open bar.

Tickets start at $750 and are available here.

Music at the Market on Feb. 11 will feature a headlining DJ set from the Chainsmokers, with performances by Lil Baby and Gunna. On Feb 12, 50 Cent will host Electric Nights With Maxim, which includes performances by Tiesto, Loud Luxury and DJ Vice.

Tickets for the first night will cost a modest $750, while Saturday’s celebration will run you $1,050. Tickets for both nights are available here.

NFL Honors will highlight the league’s standout players from YouTube Theater on Feb. 10. Big name awards such as the most valuable player, coach of the year and rookie of the year will be handed out next door to SoFi Stadium.

The televised event can be seen on ESPN+, NFL Network and ABC starting at 6 p.m. PST. You can buy tickets starting at $1,500 here.