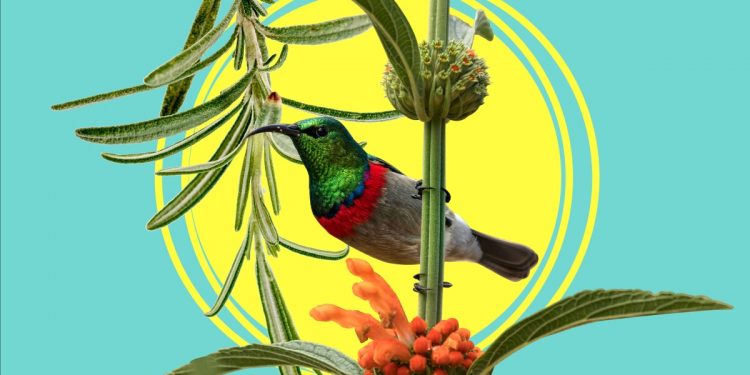 
In case you didn’t get the memo, California and the rest of the West are deep in drought, with no end in sight, so there’s no better time than now to reshape your landscaping — or balcony-scaping — with drought-tolerant plants.

This isn’t hyperbole. Climate scientists recently reported that the last 22 years rank as the driest period in the American West since the late 1500s, a megadrought worsened by increasing global temperatures.

Less rain means less water for drinking and farming and certainly irrigating our yards, so it makes good sense to seek out drought-tolerant plants adapted to thrive on limited water — and we’re looking beyond succulents and cactus in this story. We deliberately went looking for fragrant plants with beautiful foliage and/or flowers, and found a few edible plants to boot!

Many of these suggestions are California native plants that have adapted to the hot, dry summers and (once upon a time) wet winters of Southern California. When in doubt, be sure to consult the California Native Plant Society’s CalScape database which has lots of suggestions for flowers, shrubs and trees that have adapted to grow in your particular region, and provide vital food and habitat for the insects, birds and other animals that live there.

But Southern California is just one of five Mediterranean-zone climates in the world with hot, dry summers and (historically) cool, wet winters, so we’ve included some plant suggestions from those areas too, around the Mediterranean Sea, the Cape area of South Africa, southern Australia and central Chile.

We consulted with dry-clime experts Laurence Nicklin, a South African-trained landscaper who designed the South African portions of Taft Gardens and Ventura Botanical Gardens; Jo O’Connell, owner of Australian Native Plants in Casitas Springs who designed the Australian portion of Taft Gardens; Evan Meyer, executive director of the Theodore Payne Foundation, which operates one of the region’s largest nurseries for native plants, and Yvonne Savio, master gardener and creator of GardeninginLA.net, a comprehensive guide to all things green in Los Angeles.

All agree that the trick to successfully growing drought-tolerant plants is in the planting and watering. You can’t just put drought-tolerant plants in the soil and walk away. They typically need at least six months of consistent deep watering to help the roots get established and dig deep into the ground where it’s cooler, and more water is likely to be stored than along the surface. Once they’ve settled into their new habitat, most of these plants can live with infrequent watering, especially in the cooler months, although you will need to give them some water when temperatures are particularly hot and dry.

Here are the experts’ tips:

—Look at nursery tags and choose plants that are listed as drought tolerant or water wise.
—Get your plants into the ground in late fall to early spring, so the roots have a chance to settle in before the temperatures get too hot.
—Train the roots to grow deep instead of spreading out along the surface. That means watering them deeply once a week, so the soil gets wet many inches into the ground instead of several short and shallow watering sessions that force roots to grow laterally closer to the surface looking for moisture. Once the plants are mature, they will need little or no watering beyond winter rains. In fact, too much summer watering can kill many native plants, so expect to reduce their water usage down to a monthly drink if there’s no rain.
—Mulch around any new plantings to discourage weeds, keep the soil cooler and help retain moisture
—For container planting, understand that even drought-tolerant plants need more water in pots than they would in the ground because the soil in containers dries out faster than soil in the ground, and the root depth is limited by the size of your pot.

With these tips in mind, here are their suggestions for shouldn’t-be-missed drought-tolerant plants.

We could create a whole list of just beautiful fragrant California native plants in the salvia/sage family, but some, such as the lush, magenta-flowered hummingbird sage (Salvia spathacea) and purple pom-pom-bloomed Cleveland sage (Salvia clevelandii) are so fragrant that just brushing their leaves releases a sweet, intoxicating scent. And because they are California natives, they are a useful addition to any habitat garden. And unlike many other sages and salvias that demand full sun, hummingbird sage does well in dappled shade, such as you would find under an oak tree, says Meyer.

Also not to be missed is white sage (Salvia apiana), a garden standout with its dramatic silvery pale-green leaves and tall spiked blooms. This plant loves the sun, and once established does well with almost no water. It sends out tall stalks of deep purple flowers when it blooms that draw lots of attention from pollinators, “and if you leave the stalks up, the birds come in and eat the seeds,” Meyer said. “It’s fun to watch the birds perch on them.”

A hybrid of the California native coyote bush known as Pigeon Point (Baccharis pilularis ssp. pilularis “Pigeon Point”) isn’t as showy or fragrant as buckwheats and sage, but if you need a tough bright green shrub that can withstand heat and little water, this is the plant for you. It blooms profusely in the spring with white flowers that turn into seeds, providing excellent food and cover to birds and other animals. A sturdy but lovely plant for creating habitat, says Meyer.

With its clouds of creamy-pink-tinged blooms, California buckwheat (Eriogonum fasciculatum) is a handsome pollinator magnet and an absolute must for anyone trying to build habitat in their garden. It’s also one of the easiest native plants to grow, says Meyer, and it blooms throughout the summer. In the fall those blooms become equally handsome rust-colored seed heads, continuing to provide food for birds and other animals. The shrubs can get large but it’s best to cut them low to the ground every year to refresh the plant so it grows and blooms again.

The Scarlet bugler (Penstemon centranthifolius) is a California native perennial with long vividly red tubular flowers that is a favorite with hummingbirds. It’s one of three native penstemons that Meyer loves to mix in a meadow type garden, along with the violet showy penstemon (Penstemon spectabilis) and foothill penstemon (Penstemon heterophyllus), with its bluish petals and deep fuchsia throat.

The Channel Islands Tree Poppy (Dendromecon harfordii) is a fast-growing shrub or small tree filled with beautiful sunny yellow flowers from spring through fall. It prefers full sun and well-draining soils, but does well in part shade too, according to CalScape. It can tolerate summer water for the first two years, but once mature, it’s best to reduce supplemental water (beyond rainfall) to just once a month or eliminate it entirely, especially if the plant is growing in part shade.

We can thank South Africa for these cheerful, fragrant and drought-tolerant shrubs, which come in a variety of flavors and colors. This variety, Pelargonium citronella, has a citrus scent, but there are many others with aromas including chocolate and mint. The plants grow in a spreading, mounding shape, filling in nicely around taller plants. Their little flowers are charming but their real power come from their fuzzy, jagged leaves, which release their delicious scent with just a casual touch.

Hummingbirds go crazy for lion’s tail, (Leonotis leonurus), a Dr. Seuss-type plant with tall stalks of strange orange tubular flowers that look like fireworks on a stick, or a stack of bright orange sparklers. These South African natives are bulletproof in SoCal gardens, seeming to thrive in hot sunny locations. They’re a member of the mint family, so they spread fairly easily, and when the flowers dry, they continue to add interest in the garden.

Emu bush (Eremophila nivea) is an Australian shrub with soft, silvery branches studded with violet flowers. It blooms profusely for half the year, says O’Donnell, and its striking pale foliage makes it a standout in any garden.

Rosemary (Salvia rosmarinus) is a fragrant Mediterranean shrub with dark green foliage and sweet violet flowers that is handsome on its own or as a backdrop to other showier plants. It’s also a must-have herb for any well-stocked kitchen, and grows profusely with little water, enough so you can do what the French do and use the branches to perfume your meat while it’s grilling on the barbecue — or fill the inside of a delicious roast chicken.

Yes, you heard me: Tomatoes can be trained to be drought tolerant as long as you coax their roots deep into the ground, says Savio. Tomatoes have deep roots that need water, but too much makes for big, tasteless fruit, so Savio trains them right from the start, when they go in the ground.She buries 5-gallon nursery buckets (the kind that have holes in the bottom) between her tomato plants in her garden so that they rise just 4 or 5 inches above the soil. Then she fills those buckets with water once a week, sending the moisture deep into the ground, making the roots plunge deep as well. She leaves a 4-inch gap at the top so there’s plenty of room for mulch — and to stop skittering lizards from falling into the pots. And her Pasadena garden is full of yummy healthy tomatoes!