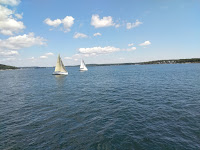 Map Quiz is exactly what its name implies. It’s a quiz game in which you’re shown a country or territory on a map and have to identify its name. The questions on Map Quiz are multiple choice so you have at least a 25% chance of getting it right. Whether you answer the question right or wrong you’ll be shown the right answer and be given some basic information about the country or territory. When you’re shown a question on Map Quiz the map may be oriented in way that is unusual for some people. You can spin the map by using the compass icon in the upper-right corner of the screen. Zooming in and zooming out is also possible in the game.

GeoQuiz is a simple game that just asks you to try to name as many countries as you can in fifteen minutes. As soon as you enter a country’s name the globe on the screen spins to center on that country. If you misspell a country the globe doesn’t spin and your entry doesn’t count. You can play GeoQuiz on your own or you can compete against other players in online rooms. Either way, you don’t need to register or enter any personal information in order to play GeoQuiz. To play against others you can join an existing room or create your own and invite people to join it. To have others join your room all you have to do is pick a name for your room and tell people to join it in the “online mode” on the GeoQuiz homepage.

In City Guesser 2.0 players are shown video clips (silent or with background noise) and have to guess the location of the city they’re seeing. After each guess players are shown how close or far their guesses were from the actual city location. It’s a simple game while also being a challenging game. City Guesser 2.0 offers games based on cities of the whole world and landmarks of the whole world. There are also country-specific versions of the game for the United States, Canada, Russia, England, France, Japan, India, Brazil, Australia, and Argentina. Additionally, there is a version of the game covering all of Asia and a version covering all of Europe.

WikiWhere is a neat map-based trivia game. The goal of the game is to identify cities based on their descriptions. The descriptions come from Wikipedia entries. You can get up to three clues before you have to answer by clicking on the map to identify the city that you think is described by the excerpts. When you click on the map you’ll be shown the correct answer and how far away you were from the correct answer.

The browser-based version of Google Earth has a bunch of geography games for students to play including a few versions of Where In the World is Carmen San Diego? If you go into the Voyager mode in Google Earth you will find other games and quizzes to try. The quizzes are neat because when you answer a question correctly you automatically zoom to the Street View imagery of the location. Check it out in my video below.

GameOn World is a multiplayer geography game developed by a high school teacher and his student in Portland, Maine. The game is similar in structure to that of Kahoot. In GameOn World the teacher selects a game category (cities, places, and timeline are three of the nine categories) and starts the game. The students join the game by going to GameOn.World and entering a game pin. In the location and timeline games, students answer the questions by moving a placemark on a map or selecting a date on a timeline. In some of the other games students answer by choosing a number on a sliding scale.
GeoGuessr shows you a Google Street View image and a clue to try to guess where in the world the imagery was captured. Playing GeoGuessr is a fun way to get students to look at all of the visual and text clues they have in order to form a good guess as to where in the world they think the imagery came from. This used to be completely free, but it moved to a freemium model in 2020 which limits how many games you can play for free.

Quizzity is an online geography game that uses a familiar concept. Quizzity presents you with the name of a city and you have to click on the map where you think that city is in the world. Quizzity quizzes you on cities all over the world. To increase the accuracy of your guesses you should zoom-in on a region before clicking the map. Each round of Quizzity presents you with six city names. Points are awarded for accuracy and speed.

Step Right Up States & Capitals is a free geography game from ABCya. It’s based on an older version of the game that was called Capital Toss. The new version of the game only has U.S. states and capitals while the old version also had a country mode. In the game the name of a U.S. state capital appears at the bottom of the screen and two rows of state names scroll across the top. When the correct state name appears players virtually toss a ball at it. Three consecutive incorrect answers ends the game.

How Many European Cities Can You Name? and How Many US Cities Can You Name? are game developed by Ian Fisher who is a software engineer at Google. Both of the games are played the same way. Simply open the game map and start typing the names of cities. When you enter a city it will appear on the map. The object is to name as many cities as you can without stopping. When you’re done you’ll see a list of the cities that you named and the populations of the five biggest cities and the five smallest cities that you named.

This post originally appeared on FreeTech4Teachers.com. If you see it elsewhere, it has been used without permission. Sites that regularly steal my (Richard Byrne’s) work include CloudComputin , 711Web, and Today Headline.