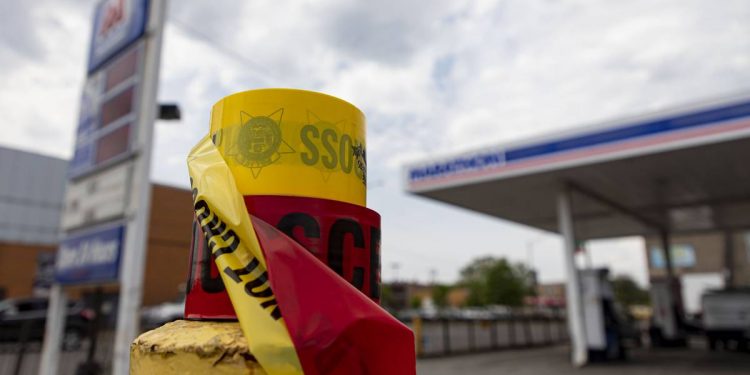 A 13-year-old who authorities said was involved in a carjacking was shot and seriously wounded as he ran from Chicago police officers in the South Austin neighborhood Wednesday, according to Chicago police and fire officials.

After he fled on foot, the boy “turned toward officers” and was shot once, Chicago police Superintendent David Brown said during a brief evening news conference at police headquarters Thursday.

“No shots were fired at officers,” Brown added. He declined to say how many times police fired.

The boy was shot once, said Fire Department spokesman Larry Langford. He was apparently unarmed, authorities said, as no gun was recovered. Brown did not say whether the boy did or did not have a gun when he was wounded in the lot of a nearby gas station.

Officers were trying “to stop a stolen vehicle wanted in connection with a vehicular hijacking from a neighboring suburb,” in the 800 block of North Cicero Avenue about 10:15 p.m., according to a statement from Chicago police.

Police from that suburb, Oak Park, had sent out an all-points bulletin for the vehicle — a gray, older-model Honda Accord — in which four people fled in after ditching a 2017 Honda CRV with a 3-year-old girl inside, which was stolen in downtown Oak Park on Tuesday night, said village spokesman Erik Jacobsen.

In the theft of the CRV, “as they drove off, the mother grabs onto the vehicle (CRV) and is dragged before falling and breaking her clavicle,” Brown said.

Officials said the stolen CRV was found less than 15 minutes later Tuesday with the child still inside and unharmed. Police discovered the CRV about a mile and a half away after its driver left it there and jumped into the Accord, according to authorities. The driver headed eastbound in the 200 block of Madison Street.

When that car was located late Wednesday, officers approached, according to police. The boy took off running down the block, “where an officer discharged his weapon,” wounding the 13-year-old, police said.

“When Chicago Fire (Department) arrived on scene, the Chicago Police Department was rendering medical aid to the patient on the ground,” Langford said.

The boy was taken to Stroger Hospital’s pediatric unit, where he was listed in serious condition, Langford said. Officers “immediately rendered aid” to the boy, police confirmed.

A second suspect fled and was not arrested, according to a statement released Thursday afternoon from the city’s Civilian Office of Police Accountability.

“Officers engaged in a foot pursuit of one of the occupants of the vehicle,” said Ephraim Eaddy, COPA spokesman.

“One officer discharged their firearm, striking the occupant, who is 13 years of age. The officer’s body camera was activated, and COPA is in possession of third-party and POD video that captures the incident. No weapon was recovered on scene.”

COPA officials said they are not able to release the video and other materials, per juvenile court rules.

Brown said the Honda Accord had been stolen Monday night in Chicago in the 100 block of West Randolph Street after someone left it running with the keys inside.

Two police officers were taken to a hospital “for observation” and had been listed in good condition, according to the statement.

In December, COPA sent its recommendations for changes in the foot chase policy to police, but they are still in draft mode and “conversations are ongoing” about further updates, said COPA spokeswoman Jennifer Rottner.

The temporary foot pursuit policy, which went into effect in June 2021 following the fatal shootings in late March 2021 of 13-year-old Adam Toledo and 22-year-old Anthony Alvarez, will remain in place in the interim, police said. Toledo and Alvarez were both shot and killed by officers who ran after them.

As is routine, the officer or officers involved in Wednesday night’s shooting will be assigned to administrative duties for 30 days and it is under investigation by COPA.

“I am aware of the officer involved shooting that resulted in a 13-year-old being shot by a Chicago police officer yesterday evening,” Lightfoot said in the statement. “I have been in contact with Superintendent Brown and the Civilian Office of Police Accountability, led by Chief Administrator Andrea Kersten, is actively investigating this matter. I have full confidence that COPA will investigate this incident expeditiously with the full cooperation of the Chicago Police Department.”