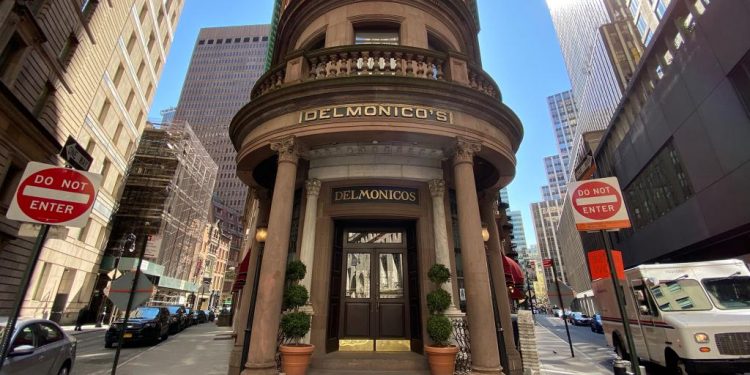 
After over 18 decades of feeding Manhattanites, iconic New York City eatery Delmonico’s is being threatened with eviction.

The Financial District eatery’s landlord claims the 56 Beaver St. steakhouse owes close to $300,000 in unpaid rent and assorted other fees and, earlier this year, served the eatery with an eviction notice, Eater first reported.

Representatives of the restaurant — which has been closed for the entirety of the pandemic — however, allege there are no grounds for eviction and rent payment is being legally withheld in response to the landlord’s failure to make necessary repairs.

The building, Delmonico’s ownership says, was badly damaged during last September’s Hurricane Ida and the New York institution isn’t paying up until its fixed.

“Our choice to exercise our tenant rights and withhold rent came months after initially raising the flood issue to our landlord. We want to emphasize that we have honored all our lease obligations, paying 100% of our rent each month even while being closed during COVID. We were disappointed our landlord decided to pursue this course,” Delmonico’s ownership told The Post in a statement. “We remain hopeful that we can come to a positive resolution with our landlord, Time Equities, and remain committed to moving forward with our exciting renovation. We want nothing more than to welcome back our Delmonico’s family.”

At the end of January, landlord Time Equities served the 185-year-old lower Manhattan landmark with an eviction notice — although the notice was for 14 days, subsequent court proceedings over its validity belated it.

This month, a judge temporarily imposed a restraining order preventing the landlord from evicting Delmonico’s, which has been slinging boneless rib-eyes from the same triangular corner of the city since 1837.

Time Equities claims it has “taken every step in coordinating with Delmonico’s on this issue, despite the fact that they have not paid rent in seven months” the company’s CEO and chairman Francis Greenburger told Eater in a statement. “We have been working closely with our engineer and the city to rectify the water damage downtown that was caused by Hurricane Ida, which has been communicated to the tenant. We are hopeful that we can come to a solution with Delmonico’s and repair the conflict.”

Time Equities did not return The Post’s request for additional comment.

In addition to its ongoing rent dispute, Delmonico’s was also recently embroiled in a separate legal battle between four alleged owners. That was resolved in spring 2021, when a court ruled that brothers Ferdo and Omer Grgurev have full ownership of the eatery, Eater reported last year.

After winning the litigation, the Grgurevs promised to reopen the restaurant by the end of 2021, but it has remained shuttered.