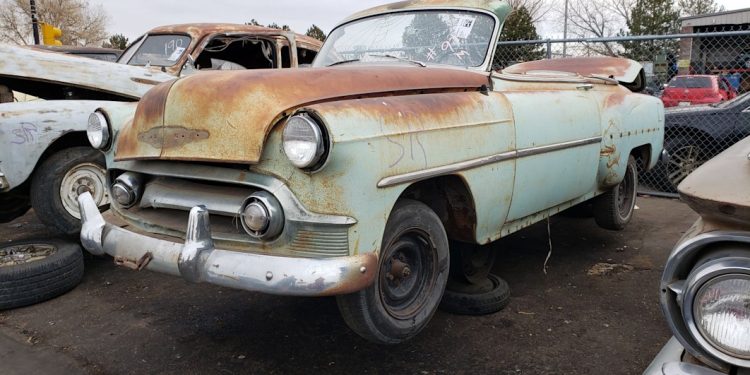 
One thing I’ve learned, after documenting more than 2,200 crusher-bound vehicles since 2007, is that most 1946-1975 Detroit sedans aren’t considered worth saving once they get a little battered. Coupes and convertibles are another story … unless you’re talking about a coupe that became a convertible — or, in this case, a roadster — in someone’s back yard. I found this 1953 Chevrolet Two-Ten Club Coupe with the reciprocating-saw roof-removal treatment in a yard near Denver last month. 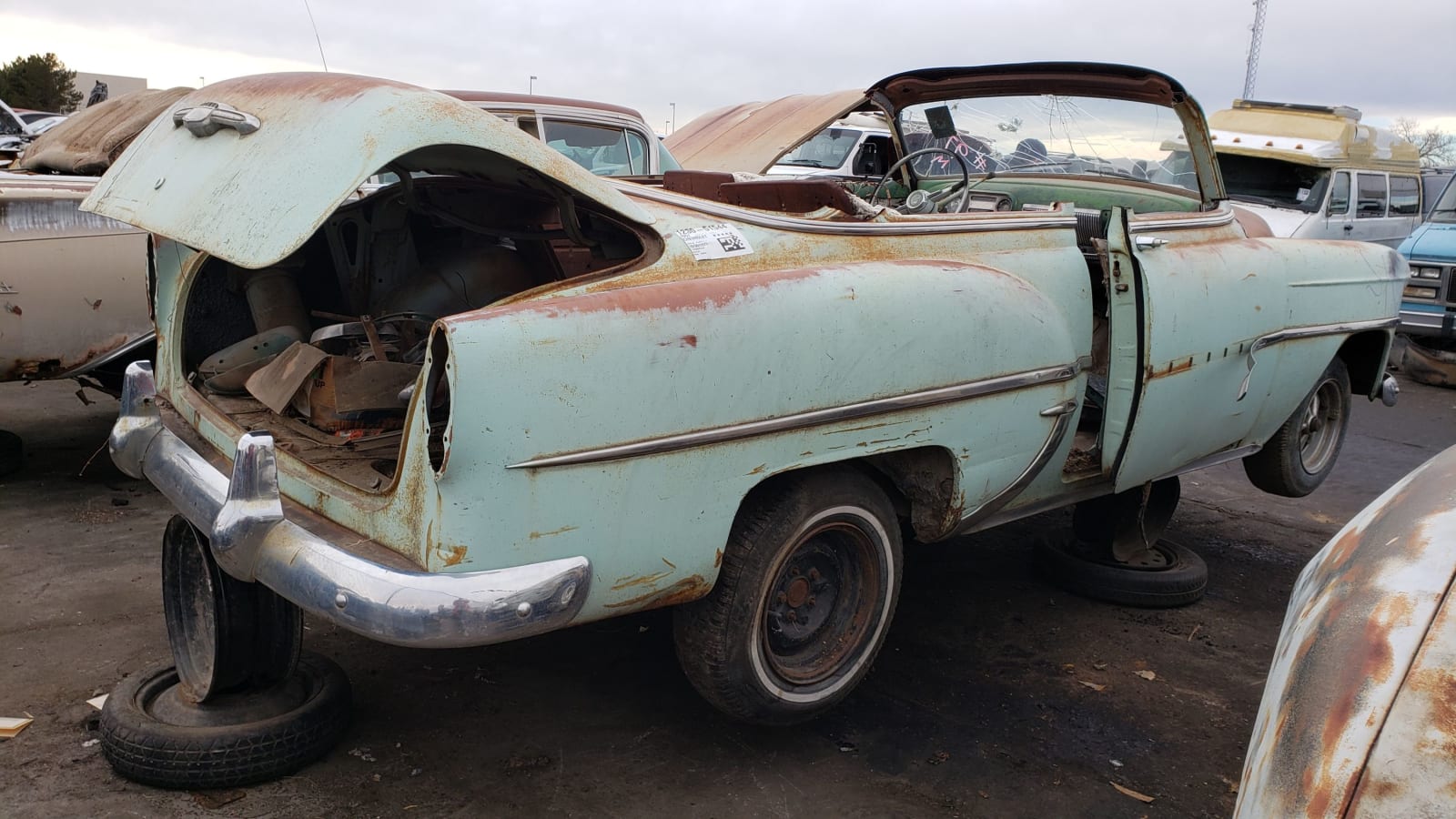 The 210 (or “Two-Ten” as it was known in 1953) was the midgrade Chevrolet for the 1953 model year, located between the bare-bones One-Fifty and the plush Bel Air. All build tags and identifying numbers had been removed from this car prior to arriving in its final parking space, but the rear quarter trim identifies the model. 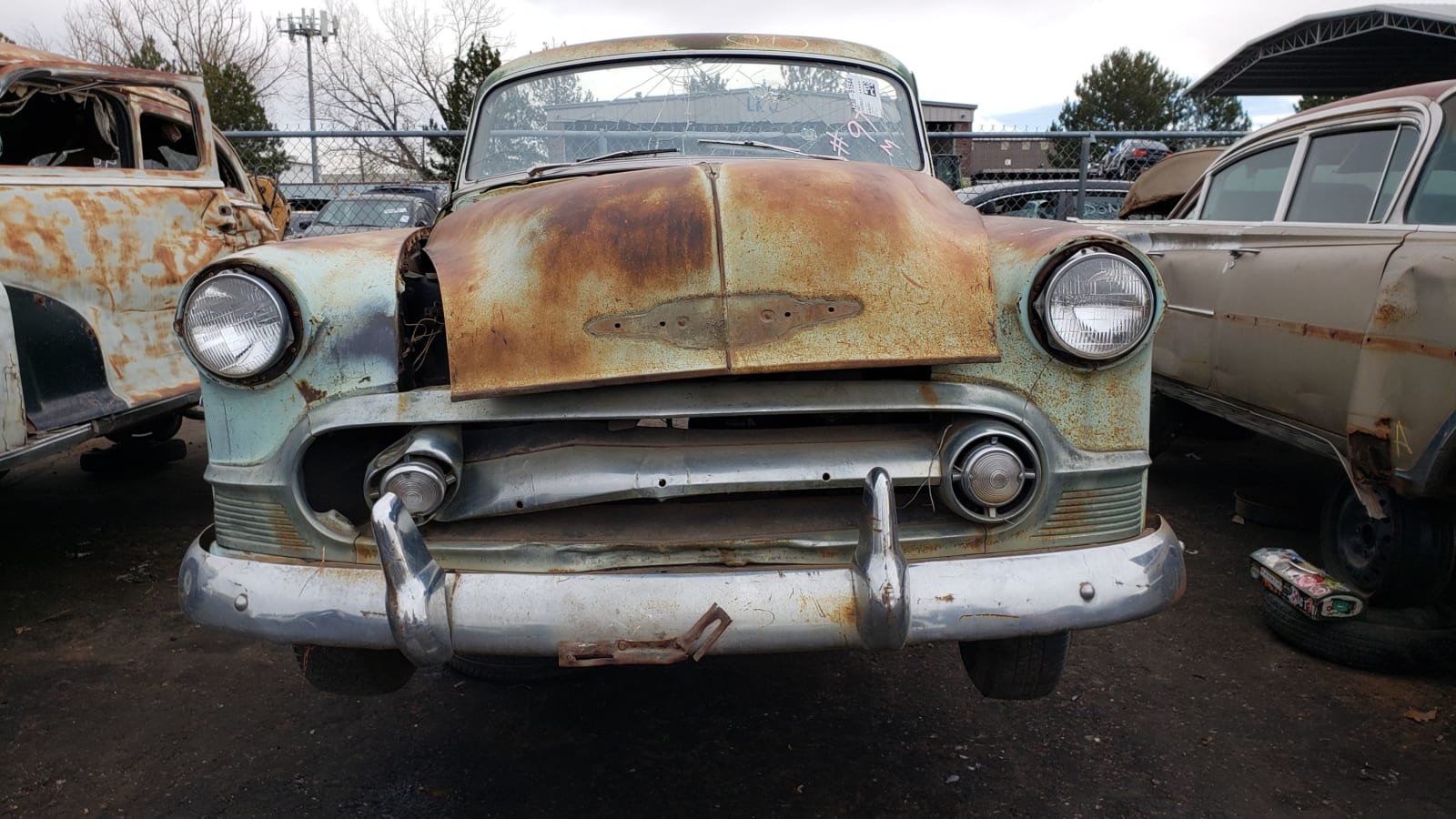 These cars weren’t at all rare to begin with; The General sold better than 1.3 million 1953 Chevrolet cars (not counting Corvettes). Still, this one deserved a better fate. 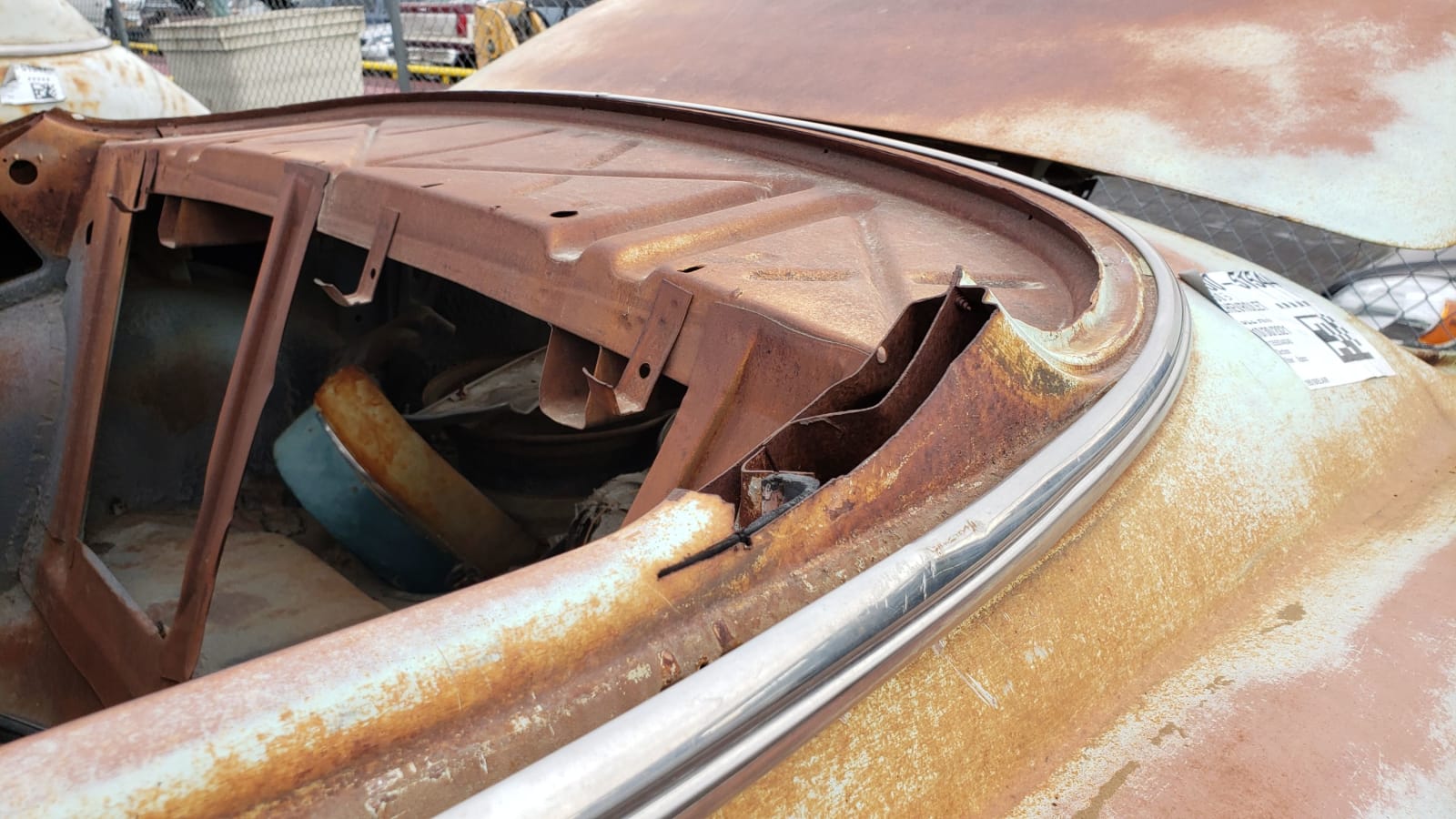 Once you slice off the roof of a car, you’re saying that you know you’ll be its final owner. Now it has nothing to keep the rain out, your passengers will get all sliced up on the ragged metal edges from your Sawzall job, and the structure becomes quite floppy (even it it did start life as a body-on-frame design, as this car did). I can think of just one chop-top roadster that evaded the junkyard for more than a year or two, and that car got extensive frame reinforcing. 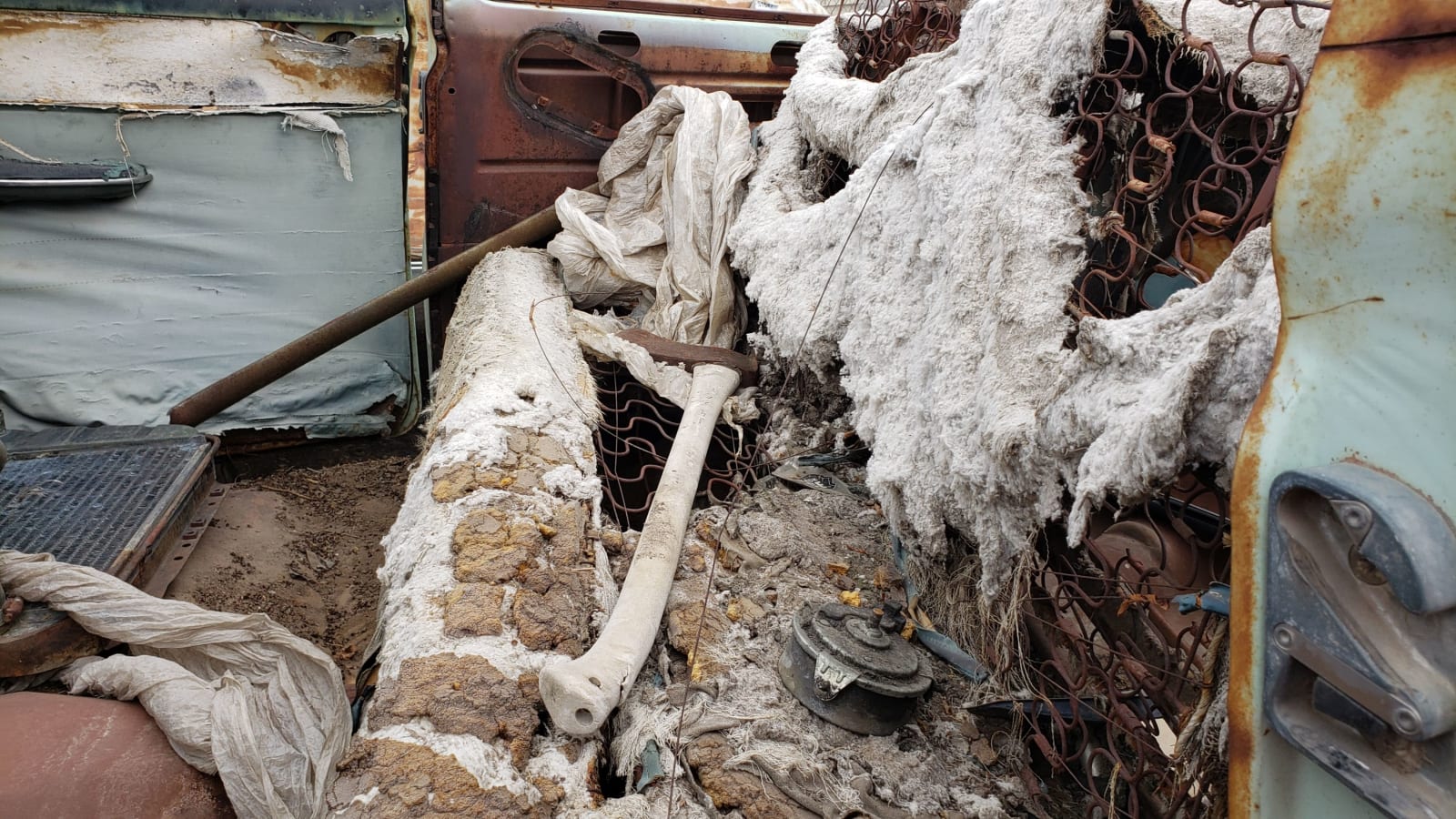 High Plains Colorado has about the worst possible climate for the long-term survival prospects of a Sawzall roadster’s interior, with 300+ days of relentless high-UV sun every year plus hail, snow, howling winds, lightning, and sharp-toothed nesting rodents. This car’s upholstery almost certainly was in rough shape when the roof went away, but it certainly got worse in a hurry after that. 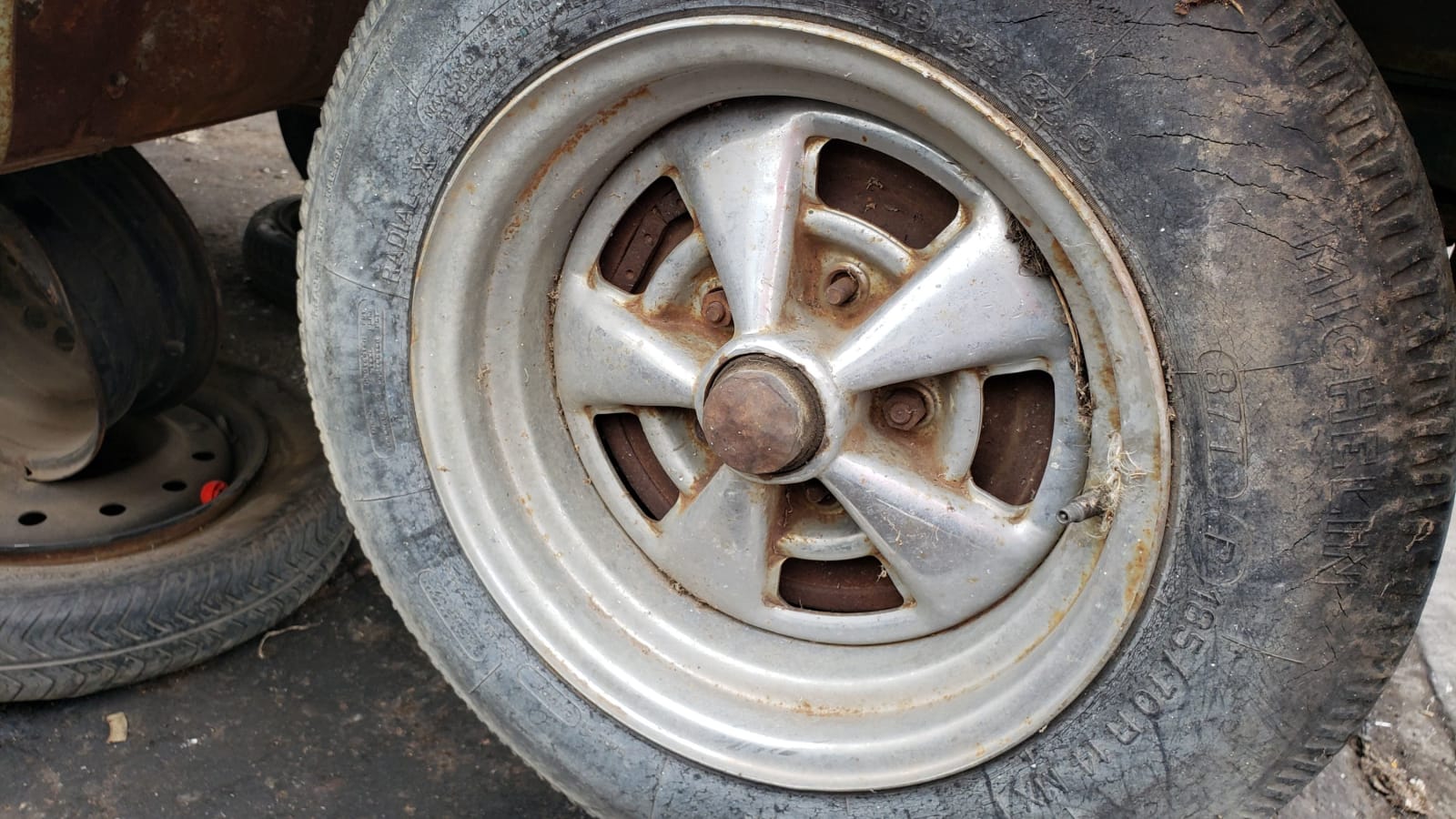 The magic of the 5×4.75″ bolt pattern is that GM used it for a half-century and it’s easy to find cool-looking wheels for a car so equipped. This one sports a 1960s-1970s Pontiac Rallye II wheel on the front left corner. When I needed wheels for a 1965 Impala, 30 years ago, I picked up a set of Rallye IIs at my local junkyard. 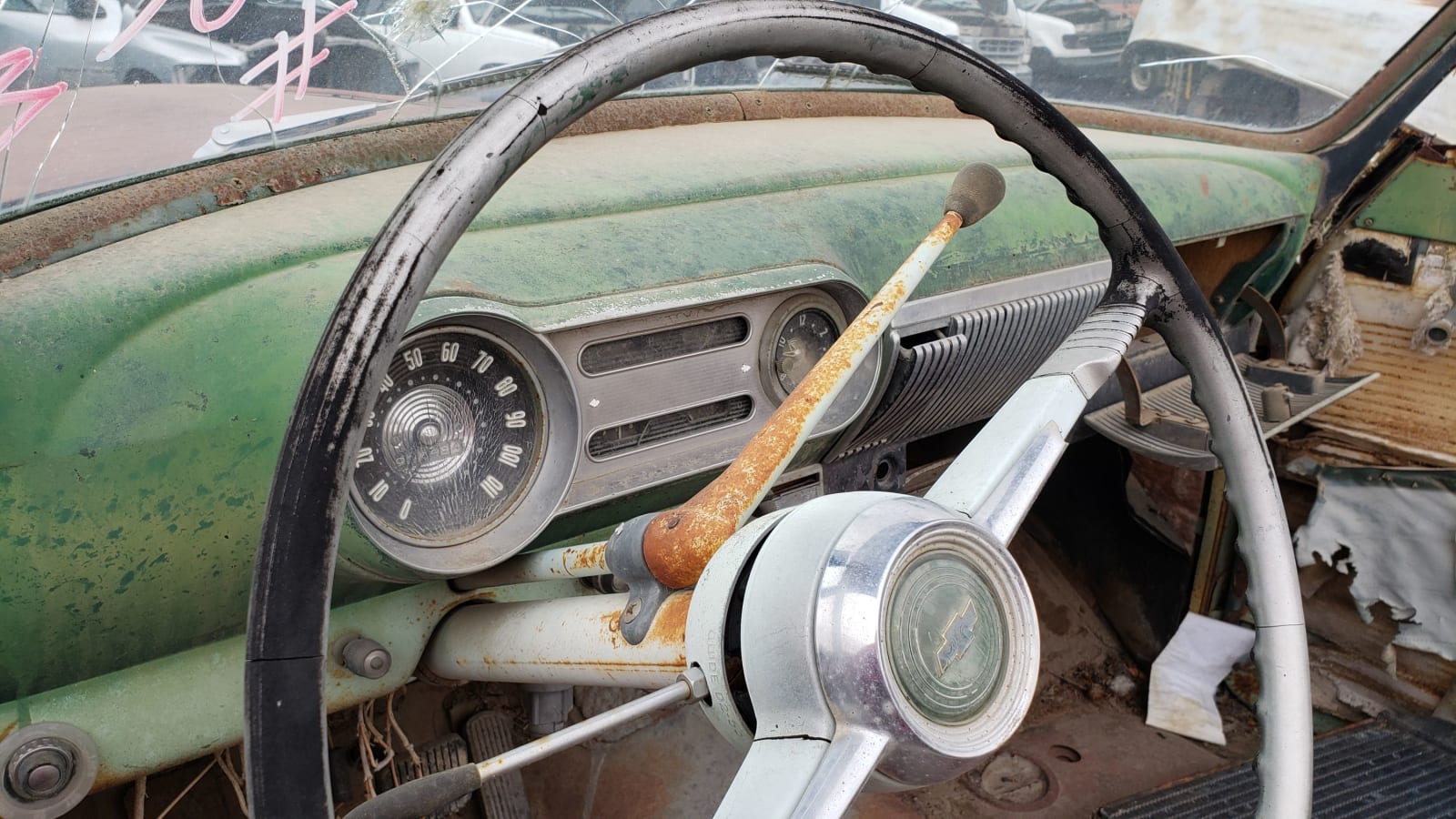 The engine in this car was long gone by the time I got to it, but the original one would have been a 235-cubic-inch Stovebolt straight-six rated at 108 horsepower. The famed small-block Chevy V8 didn’t show up until the 1955 model year. You could buy a new 1953 Chevy with a two-speed Powerglide automatic transmission, for $178 extra (that comes to about $1,900 in 2022 dollars), but this car has the three-on-the-tree column-shift manual transmission that almost everyone bought during the era.

“Performance is sweeter, nothing can beat her, life is completer in a Chevy.”