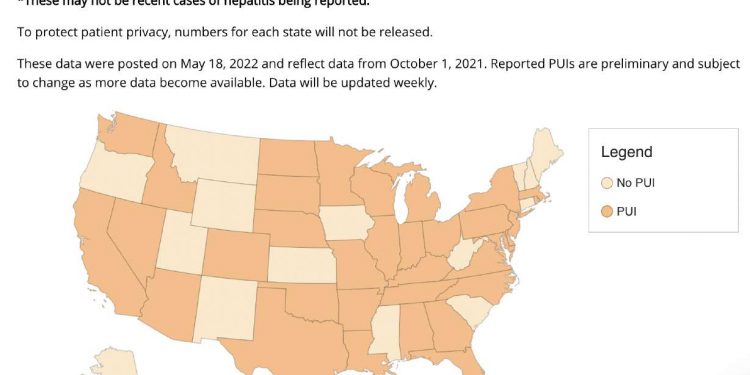 States with children under investigation for hepatitis up to May 18 are shown in a map. Health officials have identified two Utah children diagnosed with hepatitis “with no known cause” as part of a worldwide investigation that began in the U.S. last winter. (Centers for Disease Control and Prevention)

SALT LAKE CITY — Health officials have identified two Utah children diagnosed with hepatitis “with no known cause” as part of a worldwide investigation that began in the U.S. last winter.

The Utah children, under age 10, were hospitalized with serious liver illness and have since recovered, the Utah Department of Health and Human Services said.

Hepatitis causes liver inflammation that can lead to severe illness, health officials noted. The condition is similar to that seen in children in other states.

“There are many causes of hepatitis, but evaluation of these children did not find a clear source. While rare, children do get hepatitis and we don’t always know the cause,” State Epidemiologist Dr. Leisha Nolen said in a statement.

“We are working with local health care providers, public health departments, and (the Centers for Disease Control and Prevention) to understand if these children became sick because of the same factors causing increased hepatitis in children across many parts of the world. We encourage providers to report any suspect cases to public health for further investigation.”

According to the CDC, the investigation began when five children at an Alabama hospital were diagnosed with hepatitis. They each tested negative for hepatitis A, hepatitis B and hepatitis C viruses, but tested positive for adenovirus. Another review of records at the hospital identified four more patients who had both hepatitis and adenovirus infections, the CDC said.

As of May 18, the most recent update by the CDC, 36 states and territories reported a combined total of 180 pediatric patient cases under investigation over the past seven months, many of which occurred many months ago. The proportion of patients requiring liver transplants due to the disease stands at 9%.

Utah health officials said though the cause of the local cases remains unclear, data suggests they may also be related to an adenovirus type 41 infection, which causes mild colds or stomach illnesses. The two Utah cases were identified by doctors and reported to public health officials.

Six children in the U.S. have died due to the disease, as of the latest CDC report, according to USA Today.

“No further information about the cases will be provided to protect patient confidentiality,” the Utah health department said.

“We understand parents may be concerned. Call your child’s health care provider if you’re worried about their health or symptoms they may be having,” Nolen said.

Common symptoms of liver inflammation are fever, fatigue, nausea, loss of appetite, stomach pain, vomiting, dark-colored urine, light-colored stools, joint pain and yellowing of the skin. Ways to protect children and others include frequent hand-washing, covering coughs and sneezes, staying home when sick and keeping up to date on vaccinations, health officials said.

Eat Better, Get Moving, but Don’t Fret Over Diabetes

After the US Supreme Court...

Is America Prepared for Electric Vehicles to Be the Future?

The Politics: Can American “diplomacy”...

Abortion laws by state: Where abortions are illegal after Roe v. Wade overturned

Brits offered £4,000 to take part in whooping cough study that will see them deliberately infected

Would you deliberately get infected...