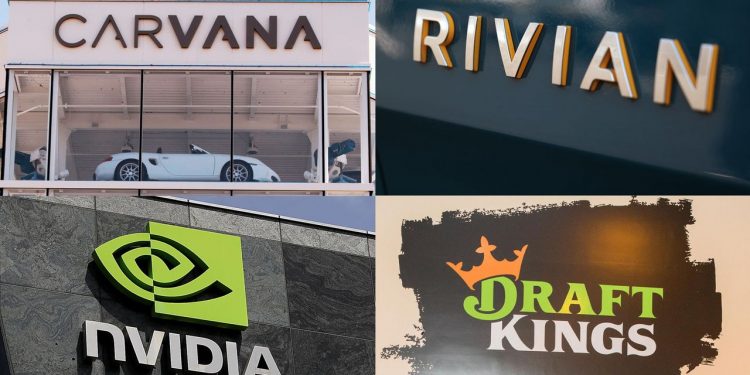 
Many technology stocks have gotten crushed in the high-inflation, rising-interest-rate environment of 2022. Some may have further to fall.

Investors with shorter-term horizons may wish to steer clear of more volatile, innovative companies, despite outperformance during the pandemic.

Those include 20 of the larger high-volatility names among the Russell 1000 Index are listed below.

Disruptive innovation is an investing style that grew popular during 2020, when so many companies selected by money managers under that type of strategy soared.

But the strategy has had difficult times since then. Now, with investors so sensitive to any signal about higher interest rates from the Federal Reserve, those volatile stocks may be best to avoid, even after significant declines.

Here’s a chart showing the total return of Cathie Wood’s Ark Innovation ETF
ARKK,
the poster child for such stocks, since the end of 2019:

That’s quite a fall to Earth. Back in December, Wood famously doubled-down on her strategy, saying stocks she was holding had fallen into “deep value territory.” She added that her strategy “could deliver a 30%-40% compound annual rate of return during the next five years.”

That was before ARKK dropped another 36% during 2022 through April 8. Wood may be correct that her style will do well over the very long term. But for investors who worry about the rest of 2022, the story may turn even uglier.

Inflation was already high during 2021, which caused investors to anticipate a change in Federal Reserve policy leading to a cycle of rising interest rates. That anticipation reversed course for many tech or innovative stocks trading high to estimated earnings.

We’re seeing more of it this year. The Fed only switched course in March when it raised the target range for the federal funds rate. The central bank hasn’t yet announced a reduction of its bond holdings, which held long-term rates low during 2020 and 2021. Still, the yield on 10-year U.S. Treasury notes
BX:TMUBMUSD10Y
has increased to 2.75% from 1.51% at the end of last year.

Of course, we cannot know how long the Federal Reserve’s round of actual interest-rate increases and bond-portfolio reduction will last, but Barone thinks some people are in for a surprise. When the Fed previously tightened monetary policy during 2018, “they didn’t get very far until they drained some liquidity and the financial markets revolted.”

Kimball Brooker, who co-heads the Global Value Team at First Eagle Investments in New York, said a rising-rate environment can be especially hard on disruptive innovators because they tend to have “cash flow way out in the future that you are discounting today.”

“If you raise rates today, the discounts to future cash flows are higher,” Brooker said.

It’s a tough year for tech. To look forward, we began with the Russell 1000 Index
RUI,
because it includes many tech companies with high market capitalizations that aren’t yet included in the S&P 500
SPX
or other S&P indexes. We narrowed the list to the 644 with market capitalization of at least $10 billion as of Dec. 31. We then sorted the list by 12-month beta against the Russell 1000 Index.

A stock’s beta is a measure of volatility against an index, whose beta is considered 1.

Here are the 20 stocks among the 644 with the highest 12-month beta through April 8:

Click on the tickers for more about each company.

Click here for Tomi Kilgore’s detailed guide to the wealth of information available for free on the MarketWatch quote page.

The table includes forward price-to-earnings ratios, which aren’t available for many of the companies, because the consensus earnings estimates for the next 12 months among analysts polled by FactSet are expected to be negative. In comparison, the forward P/E ratio for the iShares Russell 1000 ETF is 20.8.

Don’t miss: These income strategies can help protect your stock investments from inflation and a recession