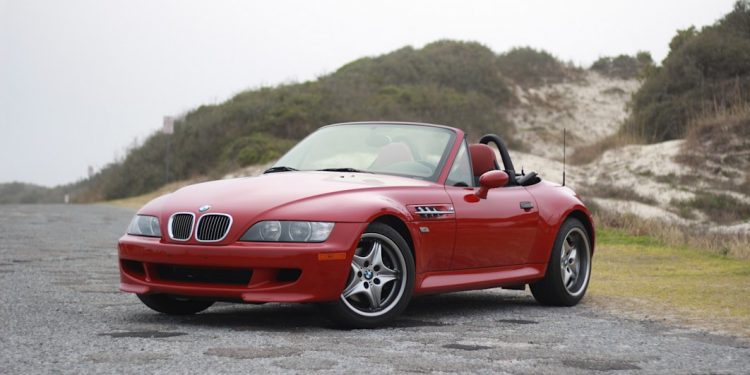 
Throughout the 50-year history of BMW’s M division, the performance team has screwed together some oddball cars. We know BMW M best for its legendary M3s and M5s built over the decades, but if you only consider these models, you’ll miss some of the wilder creations to sprout from Munich.

The 2001 BMW M Roadster is a shining example of a lesser-known, but still superb vehicle from BMW M. It’s the fully hopped-up M version of the little Z3 Roadster, and it’s a brilliant — if a little scary at times — way to have fun without a roof.

BMW superfans will already be drooling after they read “2001,” because that means it has the big engine. Prior to 2001, the M Roadster (built 1998-2002) was powered by the E36 M3’s 3.2-liter inline-six that produced 240 horsepower – a healthy increase over the already potent inline-six upgrades in the non-M Z3. For 2001, however, BMW went from healthy to insane, swapping in the then-new E46 M3’s engine, which in the M Roadster would produce 315 horsepower made at a screaming 7,400 rpm. BMW made a number of other enhancements for 2001, and you’ll see this reflected in pricing for used examples these days. Any 1998-2000 model year M Roadster will look like a bargain compared to the 2001-2002 models, and that’s largely because of the engine. Rarity would be the other – BMW sold only 921 in North America in 2001 versus 4,338 the year before. 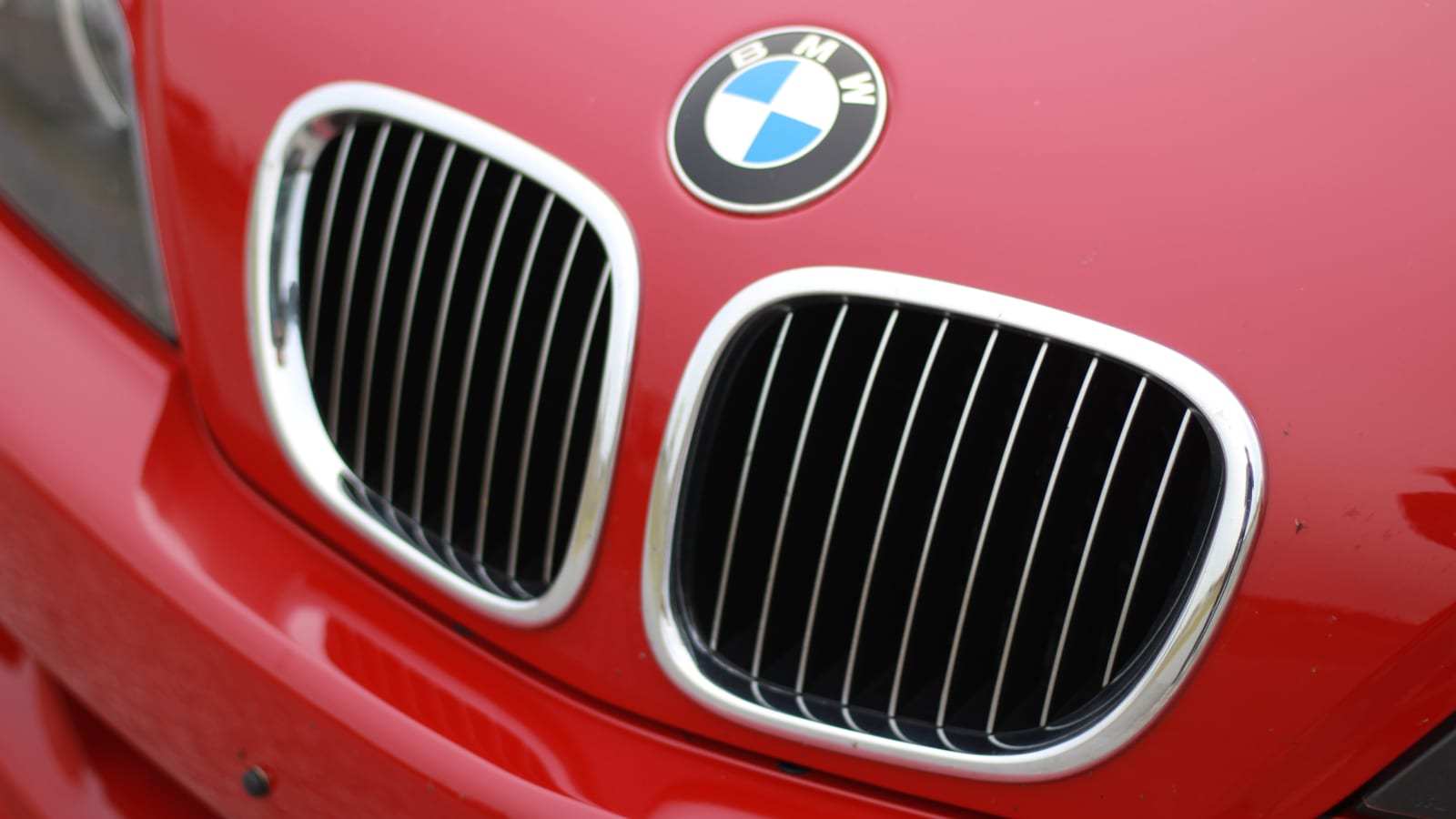 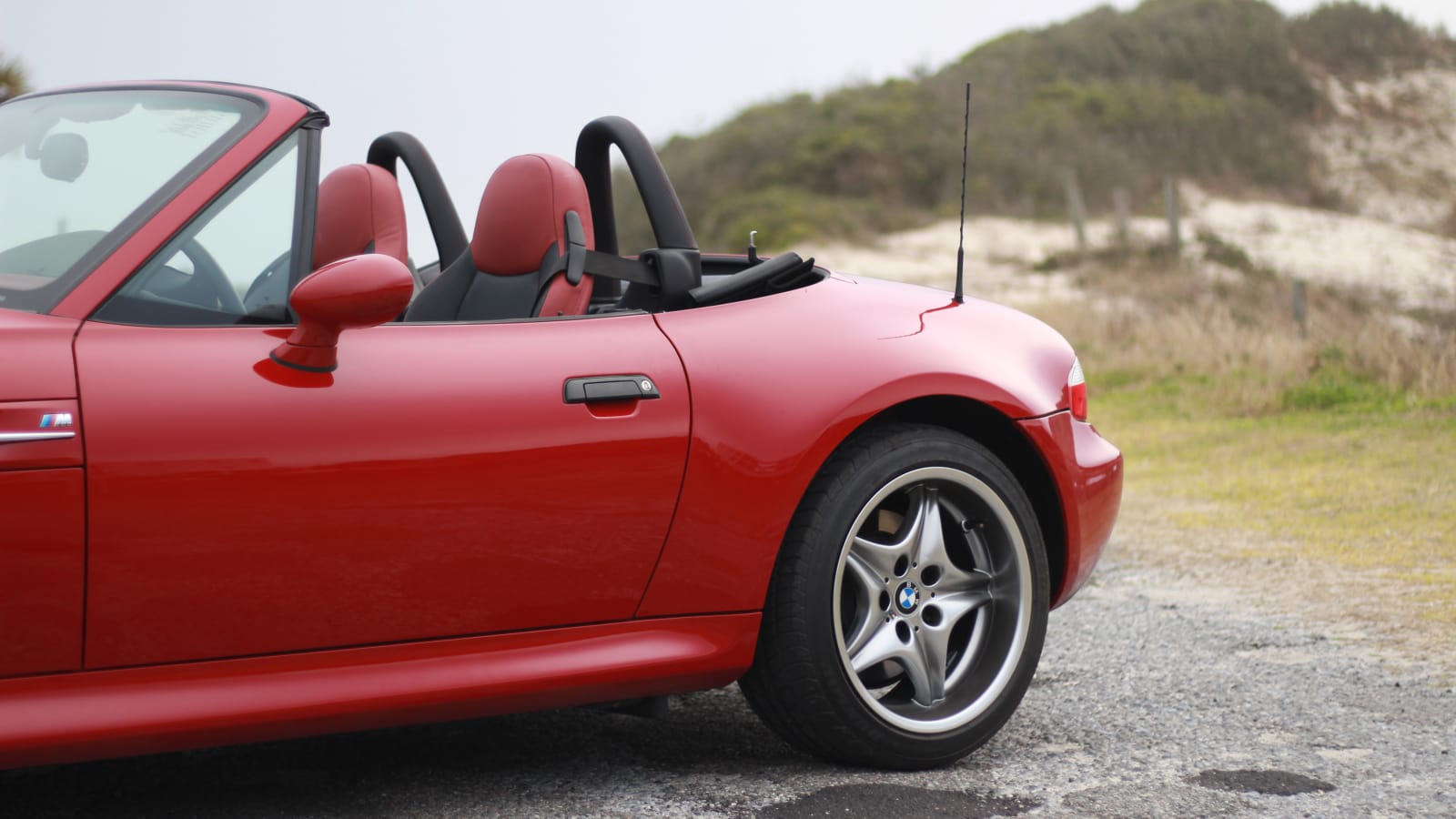 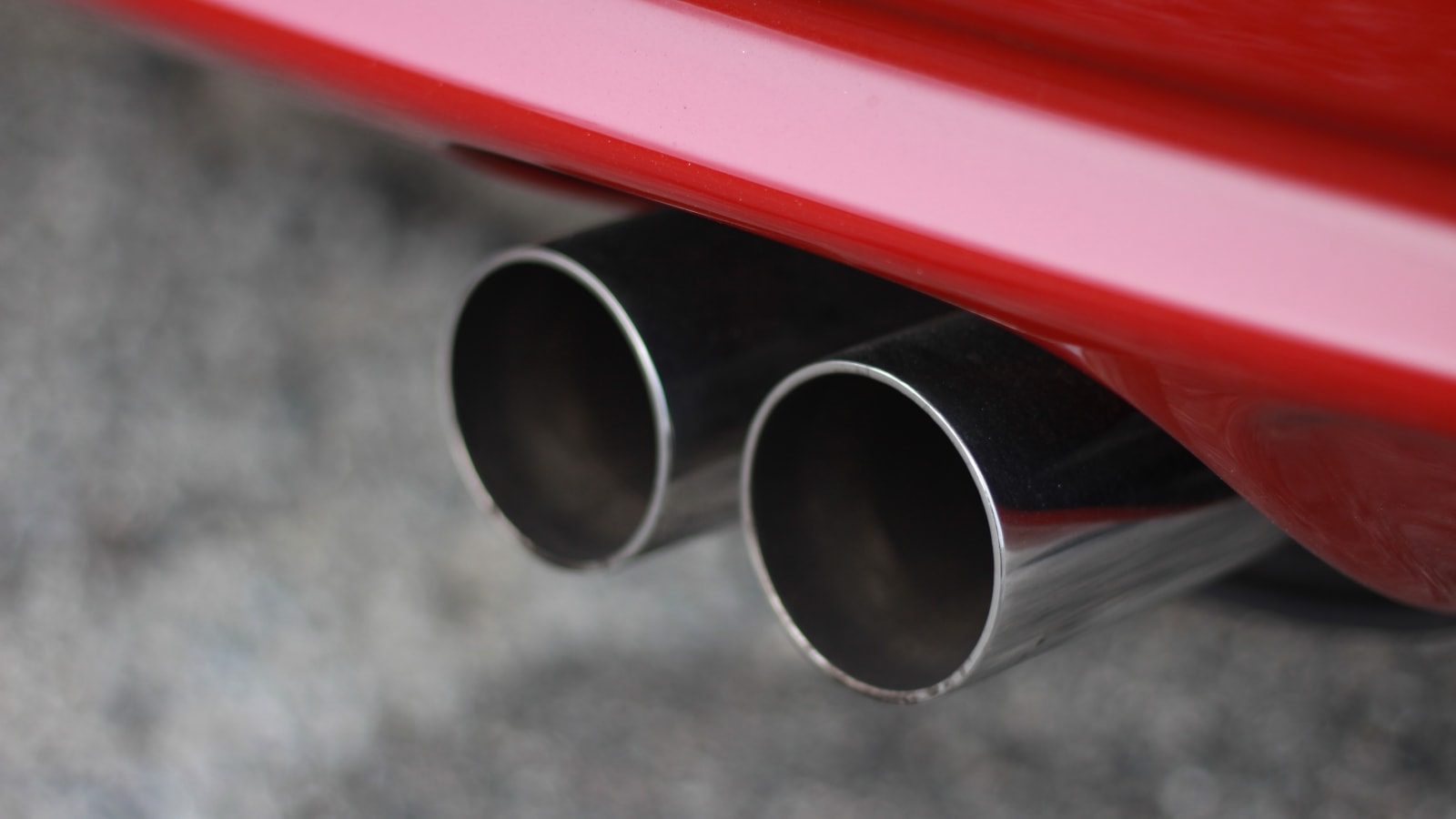 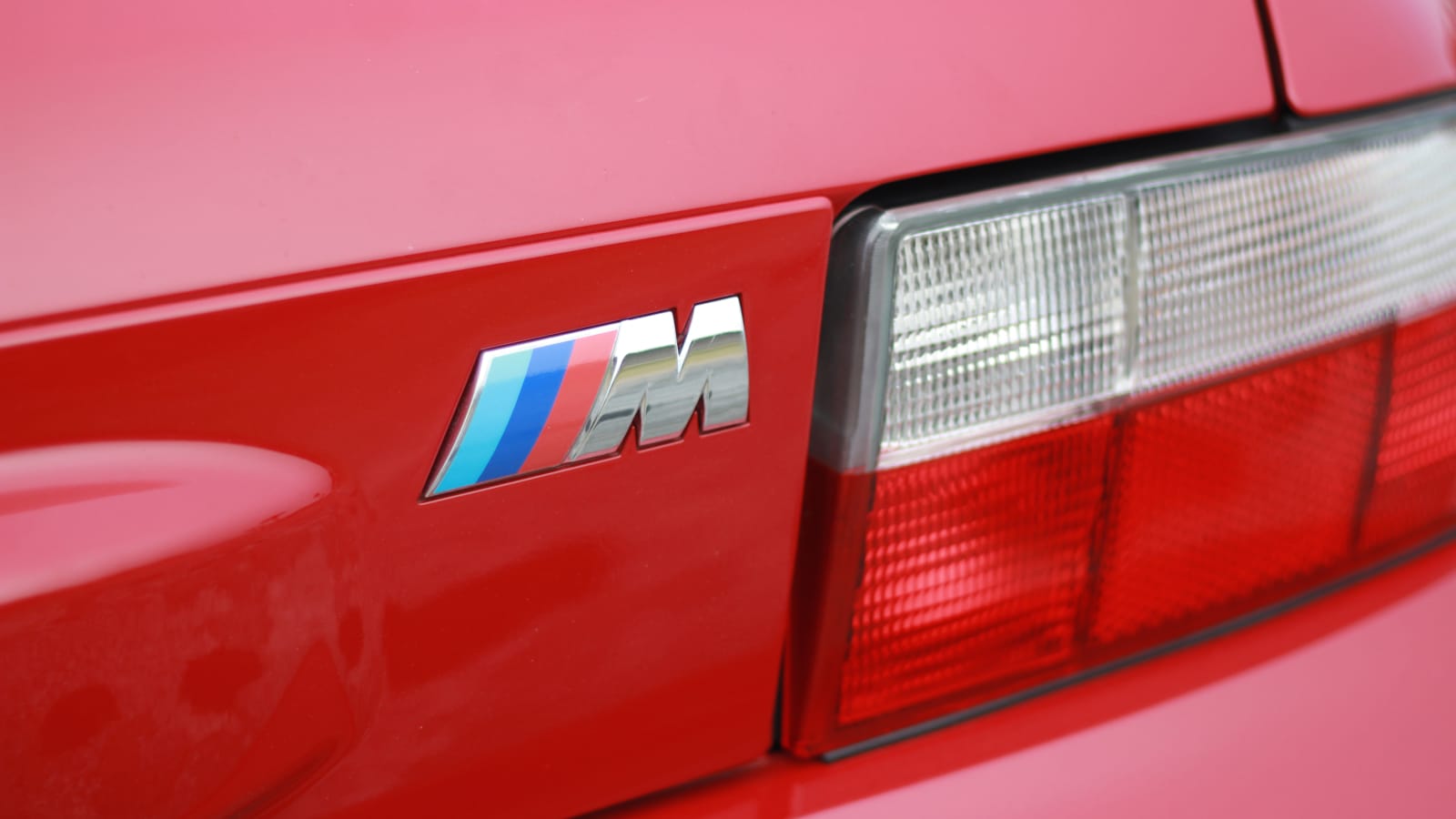 The specific 2001 M Roadster provided for my experience was a BMW-owned museum car with only 800 miles on the odometer. I’m still shocked that BMW let this car out of a climate-controlled room and onto the roads, but I wasn’t about to hand the keys back. And I’m glad that I didn’t, because this car is a total hoot to drive.

Take one look at this little Imola Red M Roadster, and the mind instantly goes “Miata.” It’s so impossibly diminutive. Don’t let the size confuse you, though. While a Miata weighed well under 2,500 pounds in 2001, this M Roadster weighs in at a chunky 3,131 pounds. Thankfully, that very powerful engine we already mentioned is more than capable of making up for this extra weight.

Bury your foot in the throttle, and any pretenses about this convertible being Miata-like disappear. One of the E46 M3’s greatest attributes is the sound of the high-revving inline-six, and there’s no better way to hear both the engine and exhaust than being in a convertible. The noise is overwhelming and intoxicating when you’re reaching for redline. It’s not just the angry and wailing note of the inline-six you’re treated to either. This little roadster will positively blow the rear tires off the car when you punch it from a stop. It’s hilariously good fun, and the foolery doesn’t stop when you shift into second. Do a quick jig in the tight pedal box, and the tire spin is back in second gear with a little wagging around of the rear end before you finally start making the called-upon straight line acceleration. 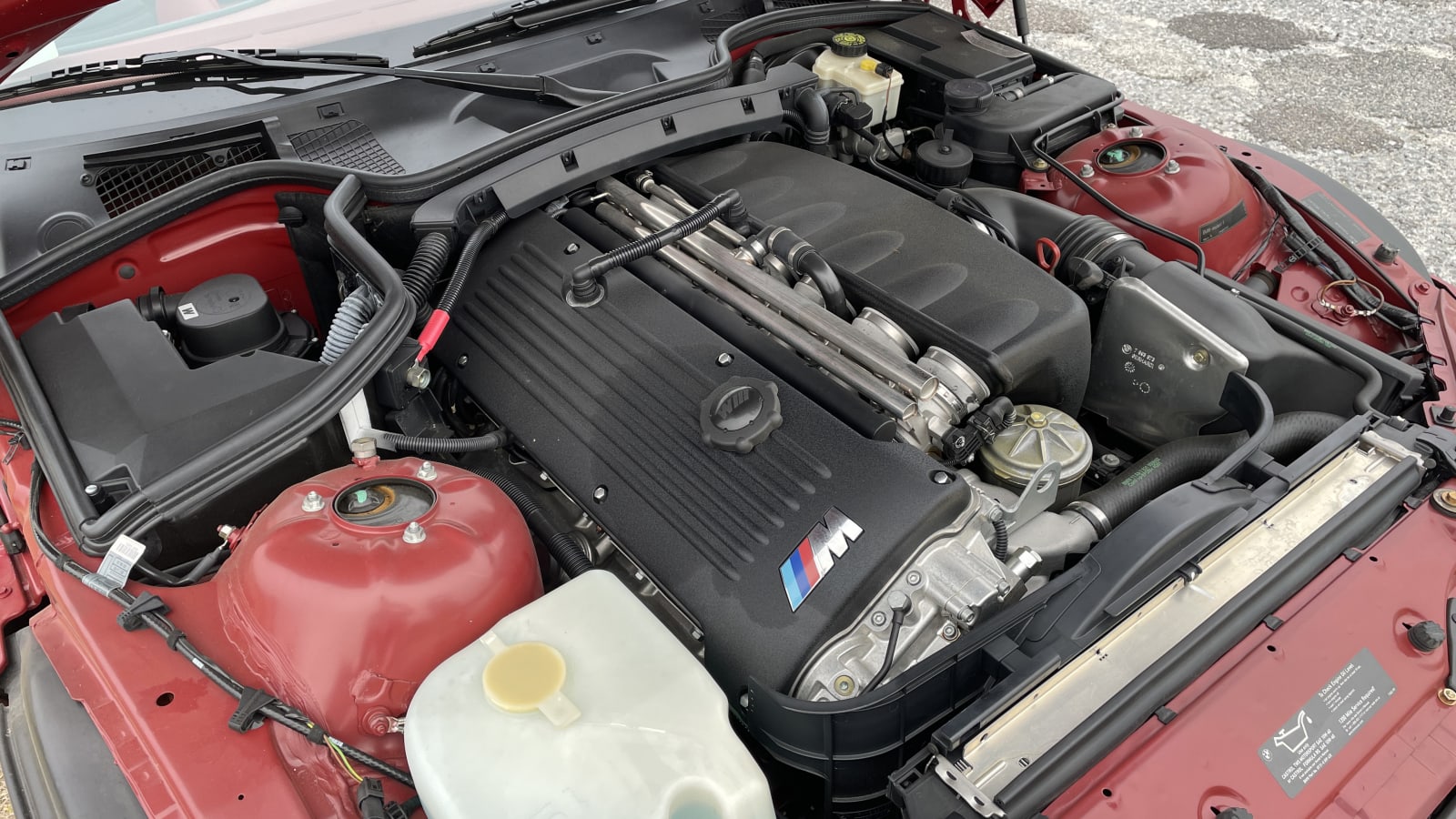 I’m left with little doubt that this engine is way more than enough for the car, not in a smoke-filled Hellcat way, but in a Mercedes-AMG C 63 S way. You can smoke’em with little-to-no effort if you want, but it’s not the whole point of the car, and there’s still an excellent chassis underneath. Yes, per usual with M division projects, this car is not just a Z3 with a beefy engine.

Just like the regular Z3, the M Roadster is a Frankenstein of sorts, with a combination of E36 and E30 3 Series parts used throughout. The M Roadster, however, got to sample from the E30 and E36 bins labeled “M3,” especially its suspension and brake components. It ran a lower ride height and fatter rear tires than the normal Z3, the latter on hand to tame the car’s power. In theory at least. All M Roadsters came with a fortified, notchy five-speed manual transmission and limited-slip differential. Notable updates for the 2001 model include even stiffer springs and shocks than before and the addition of BMW’s DSC electronic stability control system.

I’m not totally charmed by the handling at first blush, but my limited seat time and the less-than-stellar roads could partially be to blame. Unlike the easy-to-drive and friendly Miata, the M Roadster is quick to bite back. It asks the driver to be smooth and capable — as one should always be — and if you aren’t, the rear end is happy to abruptly step out. There’s a lot of power here in such a tiny package with a super-short wheelbase, and it’s due some respect. That said, its compact package results in a very agile car, and BMW gave it quick steering for the era. It handles like a car from its time, with noticeable lean and a general softness you won’t experience in modern M cars. 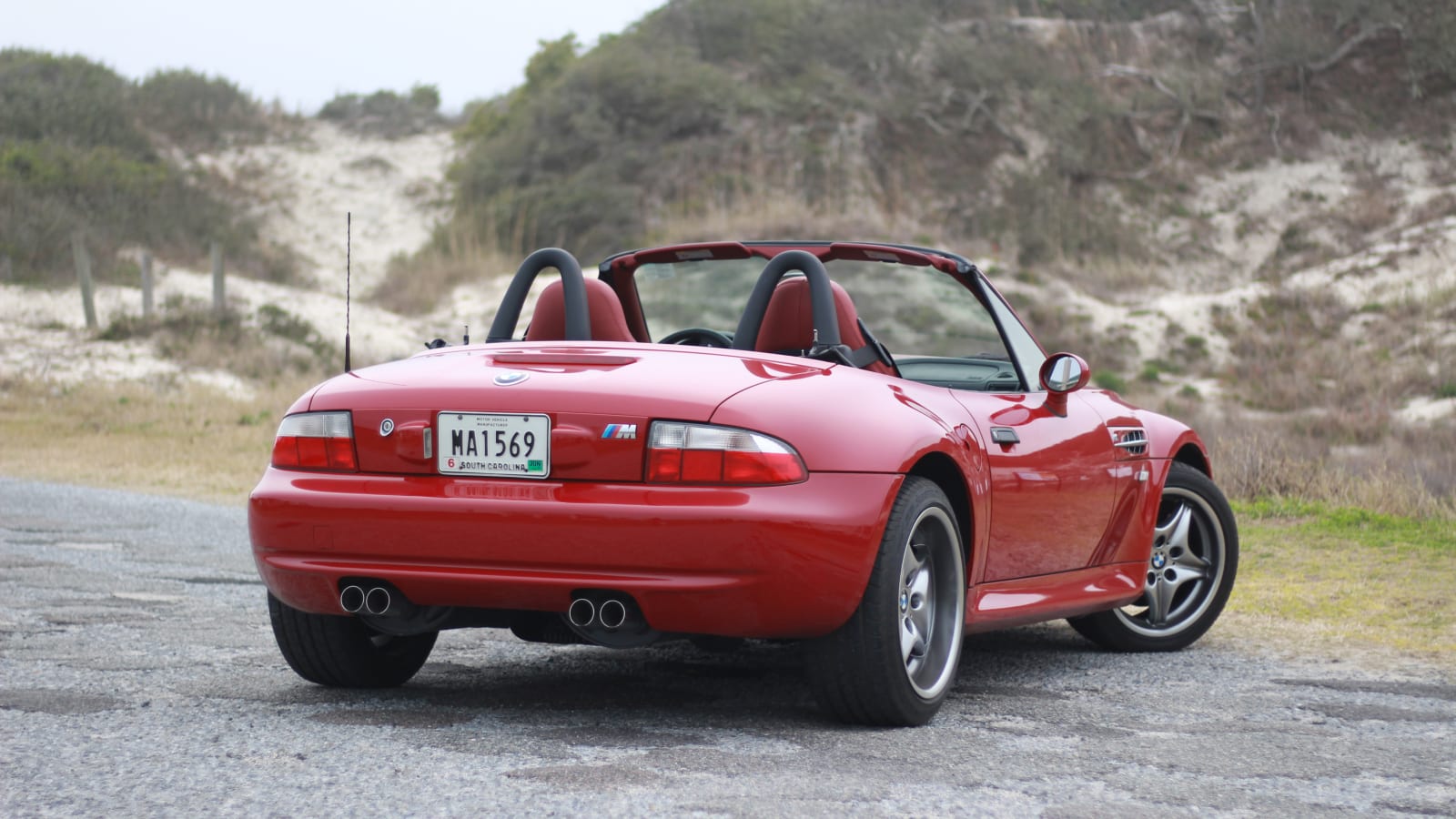 The ride quality is reasonably stiff, but it’s not unbearable or annoying. You can cruise for hours with the top down in relative comfort, and speaking of the roof, it’s not like anything you’ll find on today’s cars. The first 75-80% of putting the soft top down is manual – you undo a pair of latches, lift it up a bit with one hand and press a button on the dash with the other to electrically retract it the rest of the way. It’s weird, but it’s a system that works just fine once you know what you’re doing. Autoblog senior editor and Z3 owner James Riswick reports his quasi-power roof works the same way. He also notes later Z3 and M Roadster roofs have an extra layer of insulation that should make a significant difference in terms of wind noise.

You might mistake the M Roadster for a standard Z3 from the front. Compare them side-by-side, though, and you’ll notice the more sculpted, less rectangular air dam and brake cooling ducts in place of the Z3’s fog lights. It also adds unique side gill vents with the M logo in place of the BMW roundel, tea-cup-like M-specific mirrors and gorgeous dark finish “Roadstar” wheels. There’s zero mistaking the M Roadster for a Z3 from the rear, though. The trunk lid is totally different, with the roundel uniquely moved on top to make room for the license plate. Below, quad exhausts pop out from below the cleaner bumper that flows toward those voluptuous rear fenders filled with wider rubber. It’s all rather easy to fall in love with. 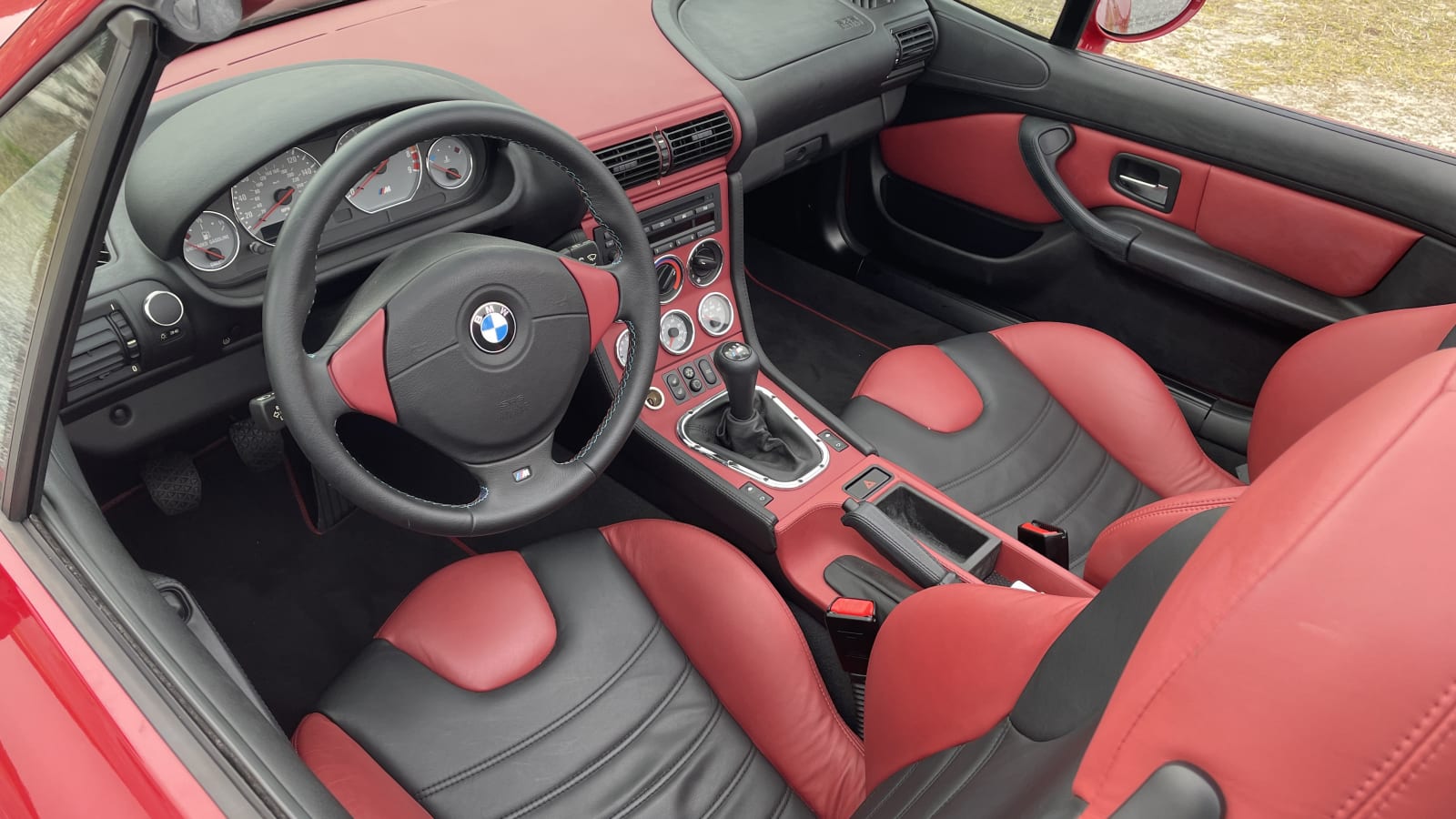 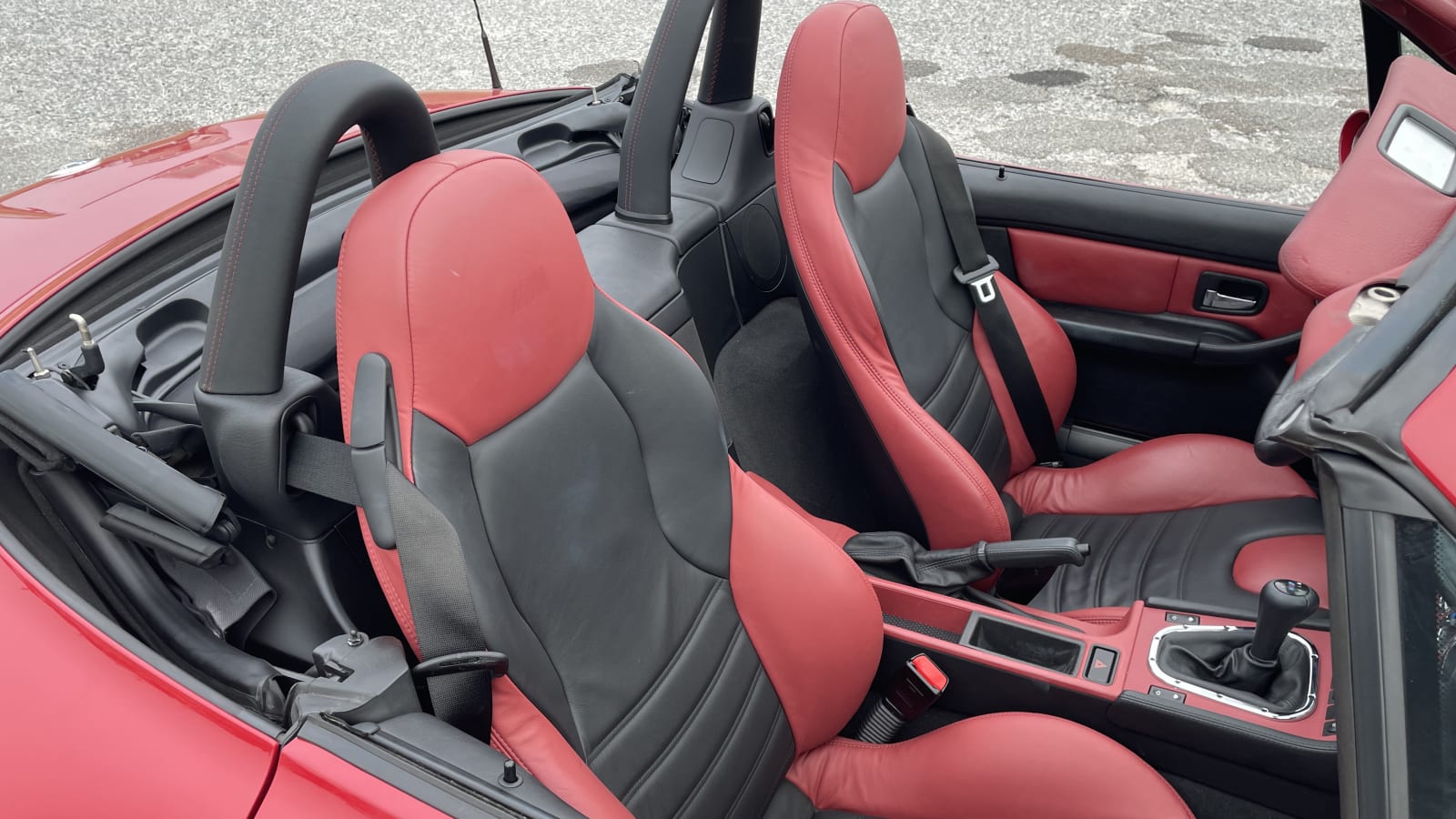 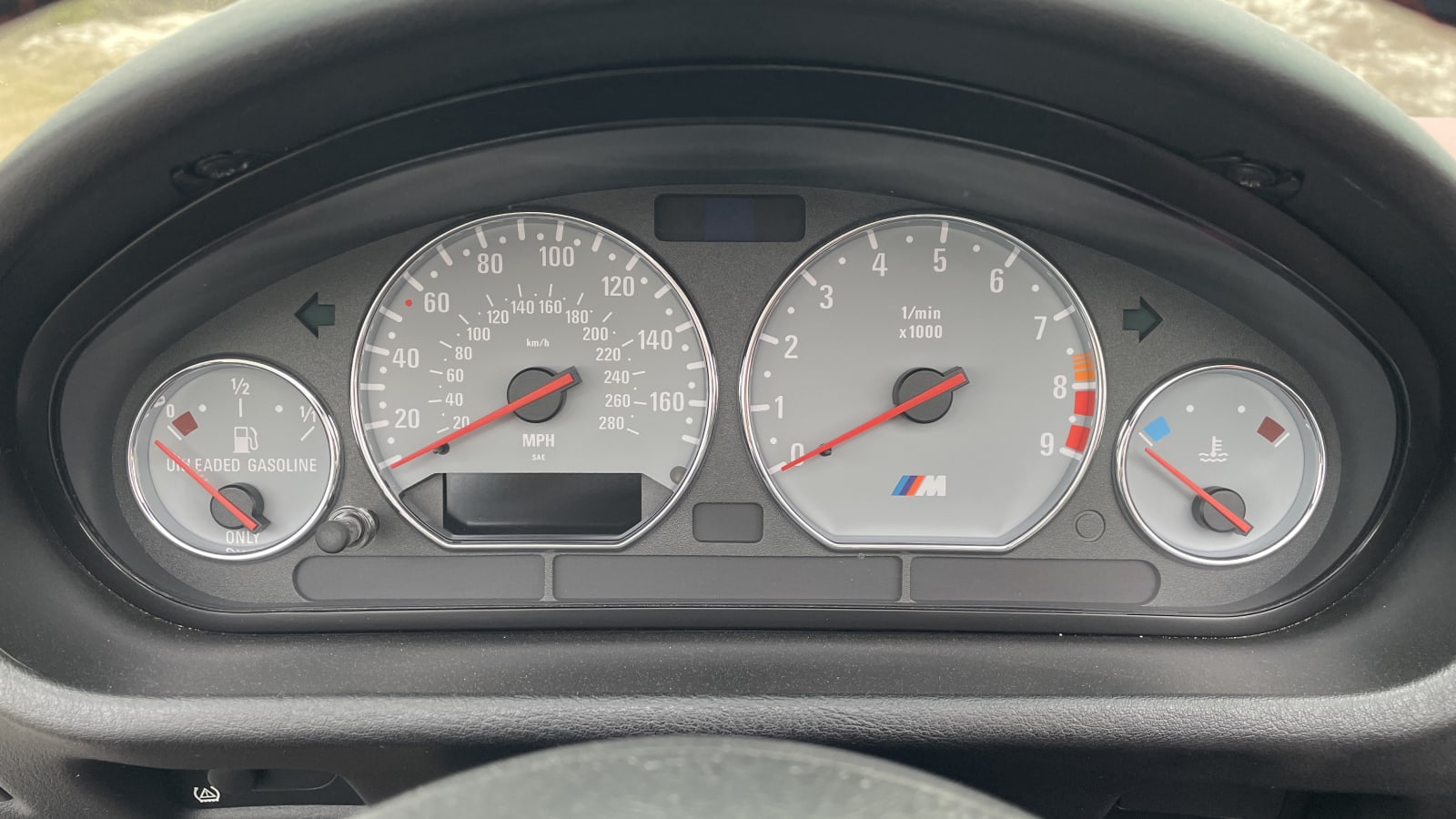 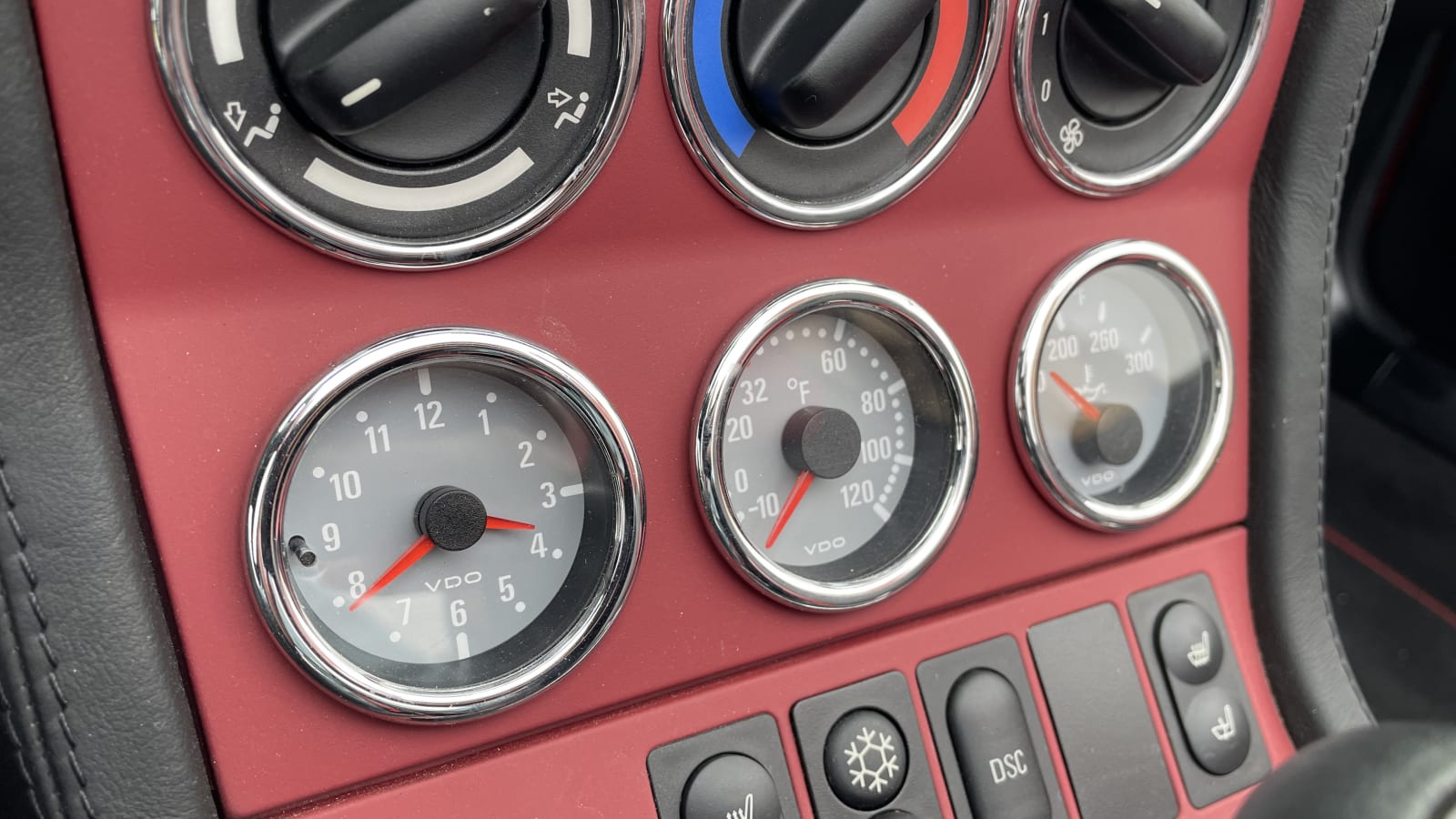 Just like a standard Z3, the M Roadster’s cabin is snug, but accommodating, offering a lovely view over the long front hood. You can’t adjust the steering wheel at all, which was strange even for the time, but even stranger is that its single position ends up being perfect. The driver and passenger have enough space for themselves, and that’s about it. Anything you bring with you must either go on the floor in the passenger side, or behind a scooted-up front seat. Cupholders? Not standard, and Riswick reports the optional accessory ones are useless for anything larger than a soda can. But you do get heated seats! And a CD player!

The M accoutrements inside add special gray gauges ringed in chrome that haven’t aged particularly well, a bunch of other small M-branded bits and a lovely M steering wheel that by this time had actually trickled down to the regular Z3. Most striking of all in my test car is the gorgeous Imola Red and black two-tone leather color combo that matches the red paint. Such vibrant combos were a signature element of the M Roadster and its M Coupe sibling – Imola Red and Estoril Blue lasted throughout their run, with Kyalami Orange and Evergreen teal eventually getting swapped out by Laguna Seca Blue for 2001. That hue was another gift from the E46 M3, along with two exterior colors that have become the most sought after among collectors: Laguna Seca Blue and Phoenix Yellow.

After spending the better half of an afternoon and evening in the M Roadster and giving it back, I’m left with a 3.2-liter inline-six-sized hole in my heart. That engine, combined with this charming convertible body is excessive and righteous fun. This oddball M car may not be a do-it-all perfect-at-everything driving machine, but it’s an M car worth owning when the singular objective is to smack a smile across your face. 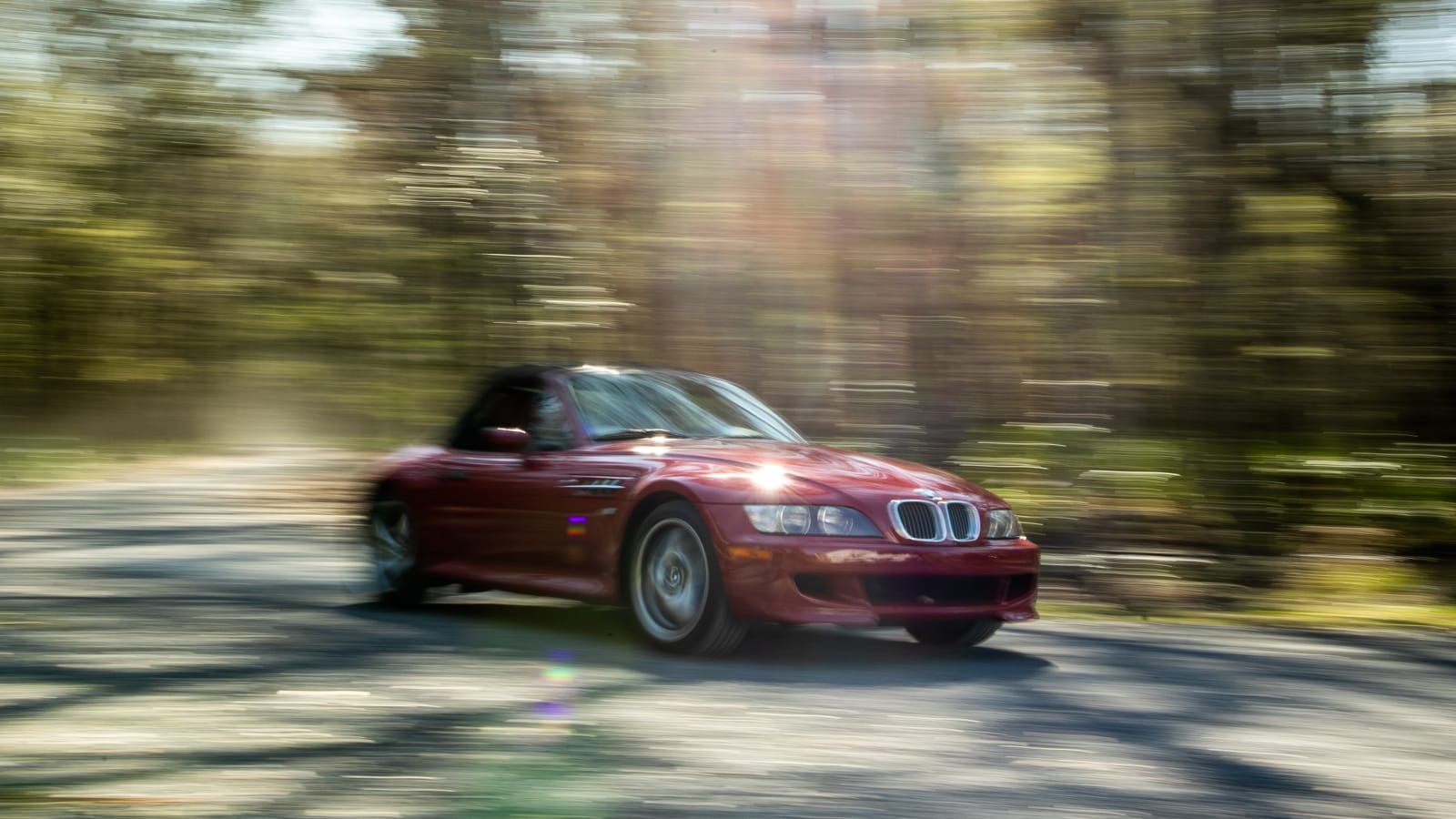 Common complaints seen online for the M Roadster depict a few key pain points. Poor seat bushings often cause the seats to wobble and the plastic rear window WILL crease and WILL get cloudy – Riswick has addressed both in his Z3, but did so himself. Window regulators fail, and the pretty red leather as seen on my test car has a tendency to fade.

Mechanically, you’re dealing with the same issues as E36 or E46 M3 owners are, since depending on the year, the M Roadster is rocking one of those engines. You can be on the lookout for nonfunctioning VANOS units and failing water pumps. The rear subframe does not take to age or use well, and in the same vein, check for worn bushings all around.

On the up side, even if the 2001 M Roadster and its engine are exceedingly rare, the Z3 was not, nor are the E30 and E36 bits and pieces that make up its underpinnings. It’s also not a terribly complex car, unlike the BMWs that would soon succeed it. Basically, on the scale of high-powered modern classics, the M Roadster is bound to be less of a headache.

Shiba Inu (SHIB) could double your money in the near term

Shiba Inu (SHIB) could double your money in the near term