2022 Beijing Winter Olympics kicks off with a ‘simple’ show and a message of ‘One World, One Family’ 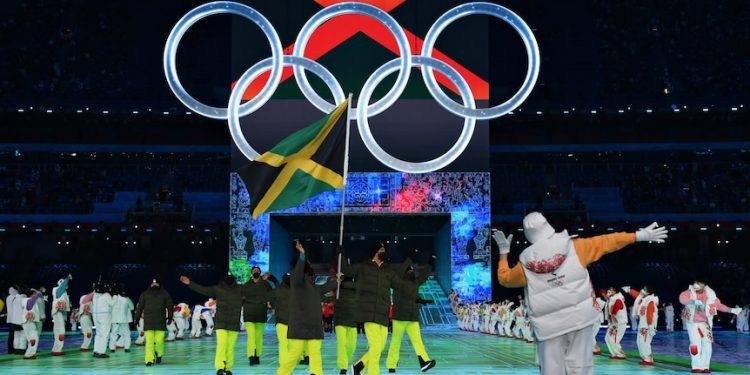 
There is a school of thought that says you should never look back.

Some would say that doing so risks tarnishing one’s fond memories of a place or time.

Beijing though, bucked the trend with a performance that preached a simplicity that only revealed itself at the last.

Directed by Zhang Yimou — the same man who orchestrated the spectacular welcome that introduced the world to a rising China in 2008 — this ceremony was said to be a comparatively stripped-down affair.

That was reflected in the limited the number of people in the stands of the famous Bird’s Nest stadium, around 20,000 due to COVID restrictions.

That meant shortening the festivities to under two hours, using just 3,000 performers as opposed to the 15,000 on hand 14 years ago.

The majority of those were, as organisers said, “ordinary people” as opposed to actors.

So, what did that leave us with?

I say apparently because, as you’d expect, despite claims of a more modest event, the spectacular choreography was still in evidence, but with an added emphasis on a stunning display of visual effects on the stadium floor.

The giant ice cube rising from the floor of the arena to reveal the Olympic rings, which were then raised to allow the procession of athletes into the arena, created a grandiose entrance.

Most impressive though was the generation of snowflakes beneath the feet of 600 child performers, a world first linking of Artificial Intelligence and motion sensor technology.

Certainly there was a different tone taken throughout this performance to that from 2008.

There was less emphasis on the extraordinary power of a rising China, replaced instead by a more conciliatory tone, focusing on how the Olympics can bring people together — particularly through this pandemic, when there has been so much separation and political tension.

IOC President Thomas Bach pressed this heavily in his speech.

“In our fragile world, where division, conflict and mistrust are on the rise, we show the world: yes, it is possible to be fierce rivals, while at the same time living peacefully and respectfully together,” Bach said.

“This is the mission of the Olympic Games.

“Bringing us together in peaceful competition. Always building bridges, never erecting walls. Uniting humankind in all our diversity.”

He even broached the growing fears of conflict, urging “political authorities across the globe” to “observe your commitment to this Olympic Truce.

“Give peace a chance.”

This bringing together of cultures and countries was a theme that repeated throughout, most visibly displayed when the placards that had been carried into the arena ahead of each nation were brought together to make one giant snowflake.

Further efforts to integrate the idea of “One World, One Family” came later, when “a walking performance of the people” saw 76 people from a variety of cultures march forward to reveal a river of images from around the world of people dealing with the pandemic.

Either side of that river of images, the Games’ motto, “Together for a shared future”.

The world though, and China, has changed significantly from those heady days, 14 years ago.

Then, China’s bombastic spectacle served to throw itself open to the world with a stunningly choreographed display.

Now, thanks to COVID, China has virtually slammed its borders shut to international visitors.

Those visitors that have been welcomed from the international media have been effectively shut off from the rest of the Games inside the strictly enforced closed loop, tested for COVID daily with an extraordinary vigour from the numerous testers around the Games sites and hotels.

Australian moguls star Jakara Anthony, among others, have praised the organisers for making the bubble so safe for athletes to operate in as COVID’s Omicron variant rages around the world, with Anthony saying that she felt safer here even than in what was then a relatively COVID-free Australia, back in November.

The strict processes in place to maintain the bubble are necessary and the Games are only able to proceed thanks to their thoroughness.

However, there was a certain juxtaposition in the sentiments expressed of the world being welcomed, while at the same time being kept at arms-length inside an Olympic bubble that is even more impervious than usual.

Zhang had promised a “bold” method by which to light the Olympic flame, “unprecedented in the 100-year history of the Olympic Games”.

In 2008 the stunning, running man elevated the spectacle of the ritualised lighting of the flame.

The method, whereby the final torch bearers planted the flame in the centre of the giant snowflake — with Australia’s tile in a prominent position —  which was then raised above the centre of the arena amidst a backdrop of a magnificent fireworks display, was in perfect keeping with the understated ideals of this performance.

The Games are officially open. Now we can all look forward to an intriguing Olympics under the most unusually detached circumstances.

Super Bowl 2022: Here’s how head coaches have fared in first trip to the big game like Bengals’ Zac Taylor

Super Bowl 2022: Here's how head coaches have fared in first trip to the big game like Bengals' Zac Taylor