2022 County Championship: What to look out for as competition makes return 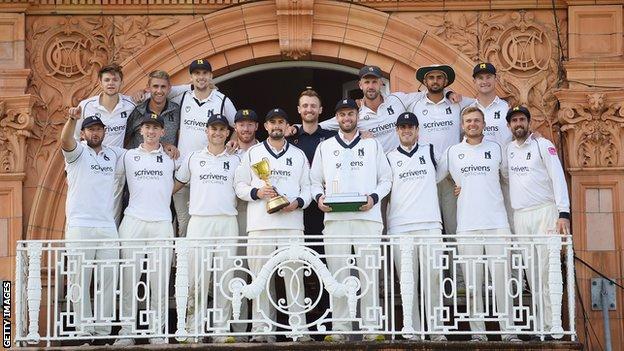 
After two years of Covid-induced changes, the County Championship has a much more familiar look to it as it makes its return on Thursday.

With all restrictions now fully lifted, fans can look forward to a season of red-ball action in 2022 with more games in mid-summer, as well as reacquainting themselves with the joys of promotion and jeopardy of relegation.

BBC Sport highlights what to look out for in 2022.

Familiar-looking format is back

After being introduced as a replacement for the scrapped Championship in 2020, and kept as an end-of-season showpiece last year, the Bob Willis Trophy will not be contested in 2022.

The England and Wales Cricket Board has yet to confirm whether the competition – won by Essex in its inaugural year, and Warwickshire last summer – will return in 2023.

So, for now, the Championship reverts to two divisions, with 10 teams in Division One and eight in Division Two.

Promotion and relegation also return, with the bottom two teams in Division One going down and the top two going up from Division Two.

It sees an end to last summer’s Covid-affected format that saw a two-phase County Championship initially split into three semi-regionalised groups, before a second stage of three divisions.

Who plays in which division was based on final placings from 2019, meaning Northamptonshire, Lancashire and Gloucestershire are in the top flight for 2022 and Nottinghamshire, despite finishing just four points behind champions Warwickshire last year, are in Division Two after their relegation three years ago.

Yorkshire, whose place in Division One was the subject of debate following the Azeem Rafiq racism scandal, have been confirmed in the top flight.

In the aftermath of England’s nightmare 4-0 Ashes defeat in the winter the ECB announced more of the summer’s prime time will be given to Championship cricket, amid calls for a major overhaul of the domestic game.

Managing director of county cricket Neil Snowball says a “comprehensive review” is needed – adding changes will be made in 2023 – but has immediately overseen the introduction of two rounds of four-day games in June and three in July – an increase of two across those months from 2021.

The opening seven round of matches will be played on successive weeks starting on Thursday, 7 April, with Warwickshire beginning the defence of their title against Surrey.

The competition takes a break for the start of the T20 Blast on 25 May, returning for those first batch of mid-summer games on Sunday, 12 June.

The final matches will be played from 26-29 September.

After a depressingly familiar away Ashes drubbing and a sobering Test series defeat in the West Indies for England’s ‘red-ball reset’ side, a number of centrally-contracted England players have the chance to blow the winter cobwebs away in round one.

Zak Crawley, who provided one of the rare moments of cheer in the Caribbean when he made a century in the drawn first Test in Antigua, plays for Kent in their opening match at 2019 County Champions and 2020 Bob Willis Trophy winners Essex.

Ollie Pope, who lost his place in the Test side to Dan Lawrence for the West Indies tour, has an early opportunity to rediscover his touch as Surrey take on the Bears at Edgbaston.

Pope is joined by all-rounder Sam Curran, who will play as a batter as he continues his recovery from a back injury, and another casualty of the Ashes thrashing – opener Rory Burns.

Yorkshire will have spinner Dom Bess and batter Dawid Malan available for their first match against Gloucestershire, starting on 14 April.

After their much-debated omission from the tour of the West Indies, much attention will no doubt fall on the early-season form of James Anderson and Stuart Broad, with Lancashire and Nottinghamshire respectively.

Neither is set to feature in the first round of matches but the legendary pair, with 1,177 Test wickets between them, will be determined to show their international careers are not yet over when they do get going.

As ever, the counties’ two permitted overseas players will do their best to grab the headlines this summer with some eye-catching performances with bat and ball.

So who might be among those getting supporters on their feet in 2022?

Nine players with international experience with Pakistan will play varying amounts of Championship cricket this summer, with some big names involved.

Already a star at 21, left-arm seamer Shaheen Afridi is closing in on 100 Test wickets, with his 95 so far in 24 matches costing just 25 runs apiece.

He will be available for Middlesex until mid-July, when his international commitments resume, and returns to England after playing for Hampshire in the T20 Blast two years ago.

His fast-bowling partner Hasan Ali has signed up for Lancashire’s first six matches. The 27-year-old has 74 wickets in 19 Tests and will hope to propel the Red Rose county to a good start after they finished runners-up to Warwickshire in the race for the Championship title, and in the Bob Willis Trophy final last season.

Another outstanding pace prospect – 19-year-old Naseem Shah – will spearhead the Gloucestershire attack as they look to make an impression in Division One. He is joined by leg-spinner Zafar Gohar, who returns for a second successive season.

Mohammed Abbas is back at Hampshire for the first two months of the season after two separate stints at the Ageas Bowl in 2021, which brought 41 wickets in 10 matches.

Yorkshire have also agreed a deal with 28-year-old white-ball seamer Haris Rauf, who will play as part of the club’s link-up with Pakistan Super League side Lahore Qalandars.

Derbyshire’s new head of cricket Mickey Arthur made Test opener Shan Masood his first signing since taking over. Left-hander Masood has hit 1,378 runs in 25 Tests, including four centuries, and will feature in all formats.

Another batter hoping to stiffen up his side’s top order is Azhar Ali, who is back in the county game with Worcestershire.

Azhar, 36, has scored more than 7,000 Test runs, including 19 centuries, and has plenty of county experience after spending three seasons with Somerset. He will be available for all the Pears’ 14 matches after replacing Australia’s Matthew Wade, who could not fulfil his deal at New Road.

Sussex have filled the gap left by departed captain Ben Brown, with the signing of wicketkeeper-batter Mohammad Rizwan, who averages 42 from his 22 Tests and more than 50 in 55 T20 internationals. Rizwan will be available from the second round of games until mid-June.

Other overseas stars in action

After a superb season with Leicestershire in 2021, Australia Test batter Marcus Harris will step up into Division One this season with Gloucestershire. The 29-year-old signed a two-year contract after rejecting the chance to return to the Foxes, where he hit three centuries in eight games last summer.

Harris’ compatriot Marnus Labuschagne is back at Glamorgan, looking to rediscover his golden touch of 2019, when his run of more than 1,000 runs in 10 matches launched his glittering Test career. Labuschagne is joined in Cardiff by fast bowler Michael Neser, who says he is “ready to go” for the new season.

Another batter who will be looking to occupy the crease for long periods this summer is India’s Cheteshwar Pujara, who has joined Sussex.

The 34-year-old, back on the county circuit after previous spells with Derbyshire, Nottinghamshire and Yorkshire, was not part of his country’s recent series against Sri Lanka and replaces Australia’s Travis Head at Hove.

No scan through the overseas stars would be complete without a mention for South Africa great Hashim Amla.

Now 39, Amla is part of the furniture at Surrey and returns for another season at the Oval, where he scored 994 runs in 2021. Among the most important of those was the unbeaten 37 off 278 balls as he showed he is a master of defence as well as attack in batting out the final day to salvage a draw against Hampshire.