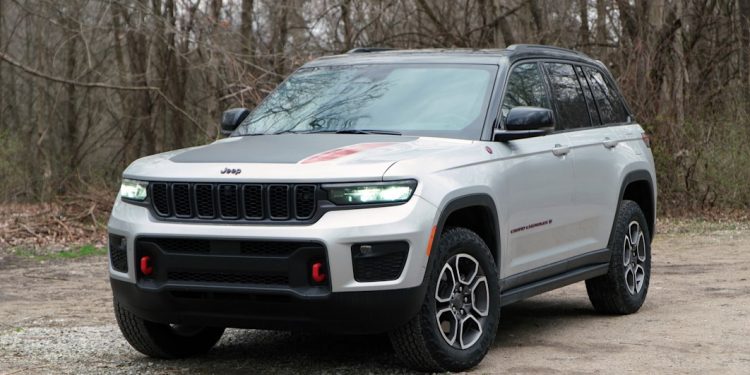 
The 2022 Jeep Grand Cherokee, perhaps more than any vehicle it competes with, must be many things to many different buyers. In its base Laredo and mid-level Limited trims, it offers heart-of-the-market buyers a rugged two- or three-row option with legitimate dirt-road capability. In its upper-crust Summit and Summit Reserve trims, we said it compares favorably with luxury offerings from Audi, Lincoln, Land Rover and Mercedes-Benz. And then there’s the Grand Cherokee Trailhawk, which is the model we just spent a week driving on and off pavement. It ostensibly competes with off-road-biased SUVs like the Toyota 4Runner TRD Pro, but as we’ll explain, it casts a much wider net than that.

Jeep has made sure that casual observers can tell that the Trailhawk is no ordinary Grand Cherokee. A matte-finish hood decal immediately gives it away, punctuated by bright red tow hooks and unique 18-inch wheels shod in chunky Goodyear Wrangler off-road tires. But it’s what you don’t immediately see underneath and inside the vehicle that really makes the Trailhawk tick.

As you’d expect from a Jeep wearing a Trail Rated badge on its fender, the 2022 Grand Cherokee Trailhawk comes with a full complement of steel skid plates to protect its delicate underbelly. Hopefully they won’t be needed, however, as the height-adjustable Quadra-Lift air suspension system lifts the Grand Cherokee to a maximum 11.3 inches of ground clearance. That’s more clearance than a Wrangler Rubicon (without the Xtreme Recon package’s 35-inch tires) and affords a water fording depth of up to 24 inches. The suspension will adjust itself based on the Selec-Terrain Traction Management mode selected, or can be manually adjusted with a toggle to the right of the knurled dial that acts as the shift lever.

Jeep’s Selec-Terrain Traction Management System includes modes for Snow, Sand/Mud and Rock in addition to the Auto mode it’ll stay in most of the time and, oddly enough, a Sport mode. These modes are selected with a toggle to the left of the spinning shifter. Selec-Speed Control keeps the vehicle traveling at a constant (slow) speed regardless of incline or decline, without further driver intervention.

Like the Wrangler Rubicon, Ford Bronco and certain versions of the Toyota 4Runner, the Trailhawk offers a sway-bar disconnect. Basically, hitting a button on the console electronically disconnects the front sway bar that normally connects the driver- and passenger-side wheels. That allows the two wheels greater freedom of movement and therefore increasing suspension articulation. It automatically reconnects at normal driving speeds to provide safer on-pavement handling.

Also standard is Jeep’s Quadra-Drive II full-time four-wheel-drive system, which features an active transfer case and a rear electronic locking limited-slip differential. It’s capable of sending as much as 100% of total engine torque to one rear wheel. Naturally, there’s a 4 Low mode that locks the front and rear differentials and switches to 2.72:1 gearing for low-speed crawling. There’s also a Neutral mode that allows for flat towing on the road. 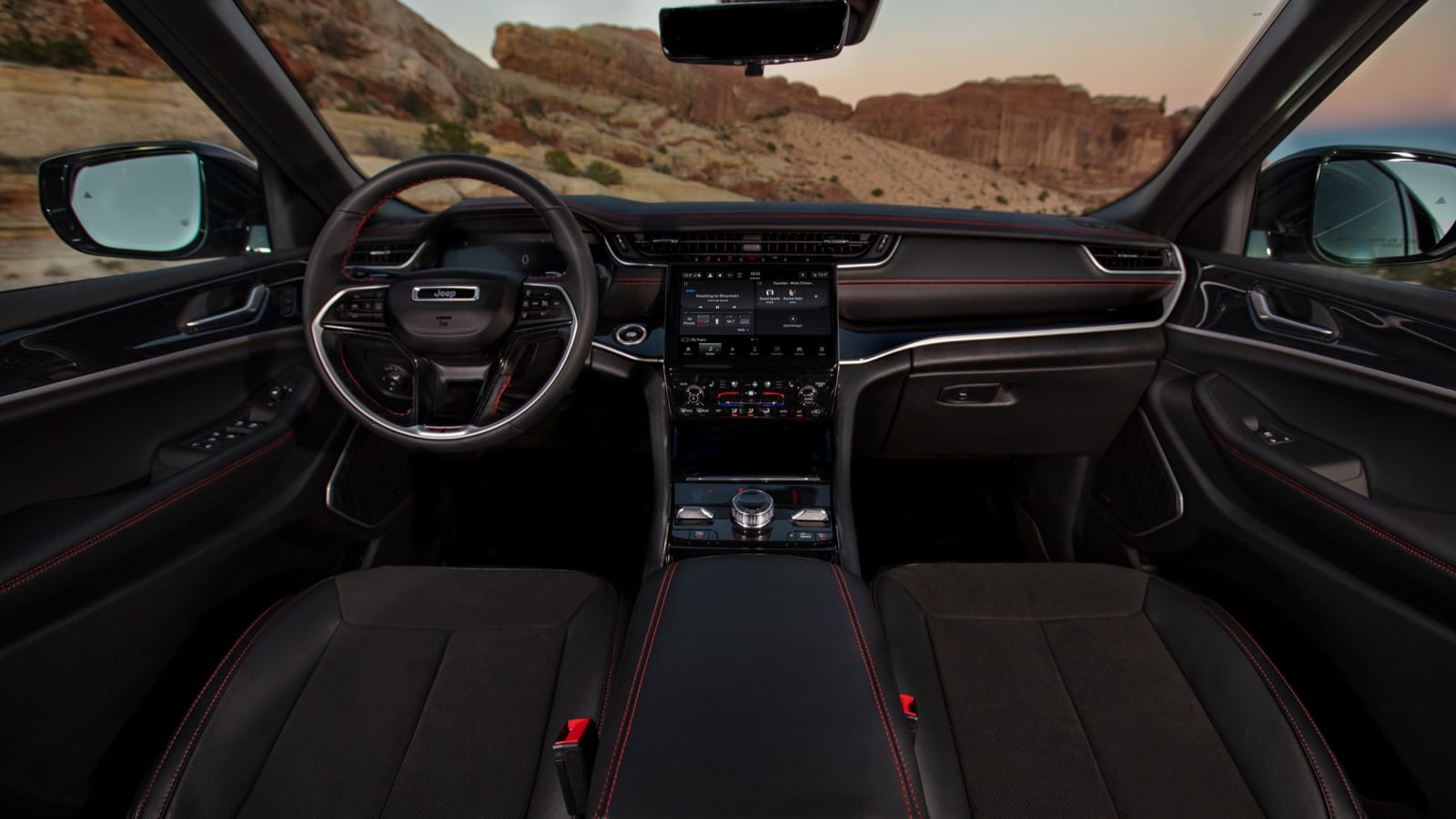 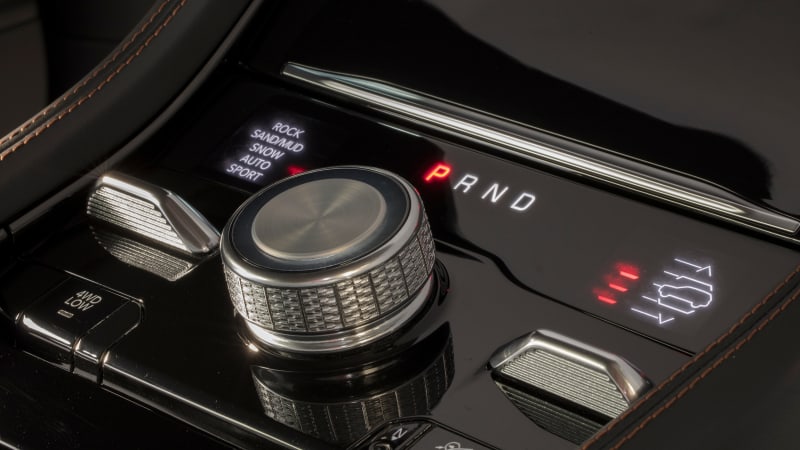 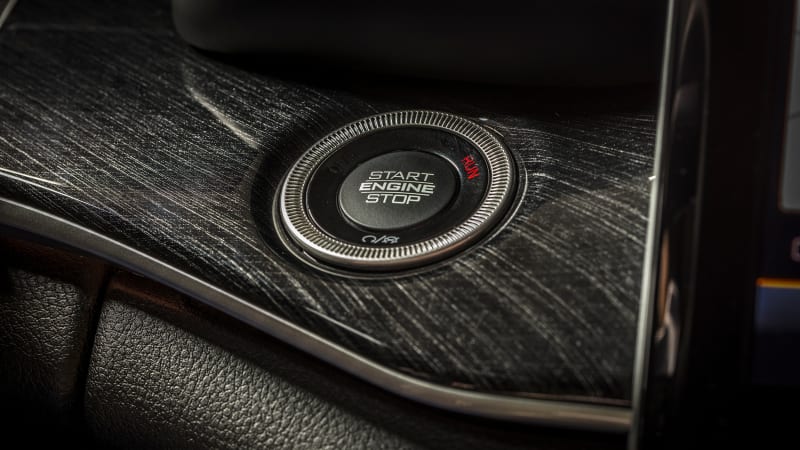 Now would be a good time to point out that all of that excellent, top-shelf hardware is mostly designed to help the Jeep Grand Cherokee Trailhawk excel off road. Sure, there’s a Sport mode, but there’s no getting around the fact that this SUV wears knobby tires and basically was engineered to be at its best while crawling over boulders, mucking through mud, sleighing through snow or whatever other sort of off-road scenario you can dream up. That’s not to say it’s no good to drive on the road, but buyers who don’t know what a disconnecting sway bar is or why it might be useful — stuff that adds significant cost — ought to look at one of the other fine Grand Cherokee trim levels. We’ll dive a little deeper into that discussion a little further below.

Power for our test vehicle was provided by a 3.6-liter V6 engine that produces 293 horsepower and 260 pound-feet of torque. We never felt like the Trailhawk was hurting for power, but for those buyers who want more, a 5.7-liter Hemi is available that spins out 357 hp and 390 lb-ft. Both engines send those ponies through an eight-speed automatic transmission to all four wheels. The EPA rates the V6-powered Trackhawk at 19 miles per gallon in the city, 26 mpg on the highway and 22 combined, and that’s right about what we managed over a week. The V8 is rated at 14 city, 22 highway and 17 combined. That’s not very good, but it’s actually on par with the much less powerful V6-powered Toyota 4Runner’s EPA rating of 16 city, 19 highway and 17 combined.

There’s a Jeep Grand Cherokee Trailhawk 4xe coming this spring, and it sounds promising on paper. It will produce 375 hp and 470 lb-ft of torque from a 2.0-liter turbocharged four-cylinder that’s paired with an electric motor. Jeep estimates drivers will get 25 miles of electric range from a full charge, and the EPA says drivers should expect a combined 23 mpg after the battery runs out of enough juice to power the vehicle without the engine’s help. As always with a plug-in hybrid, it behooves you to charge as much as possible to maximize its efficiency.

The standard V6 engine is not only adequate in power, but it’s also a smooth performer. We’ve long been fans of the eight-speed gearbox Jeep uses in the Grand Cherokee (and a number of other Stellantis vehicles), and it works well in the Trailhawk. There are dinky paddle shifters on the steering wheel; we tested them to make sure they work, and they do, but we found little use for them afterward while on the road. 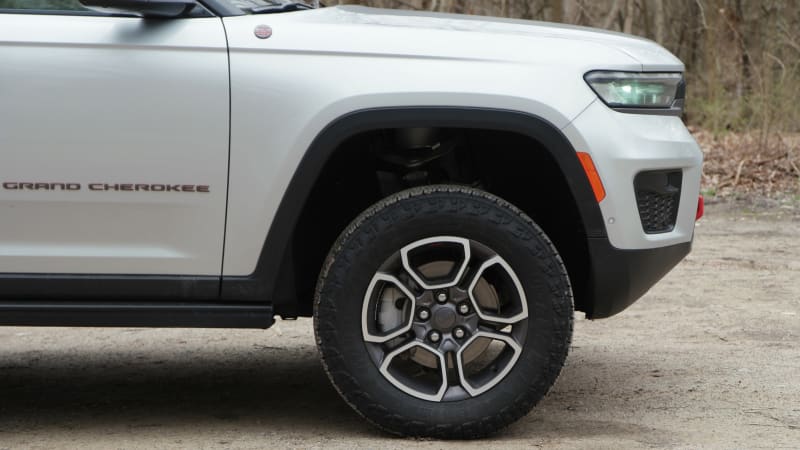 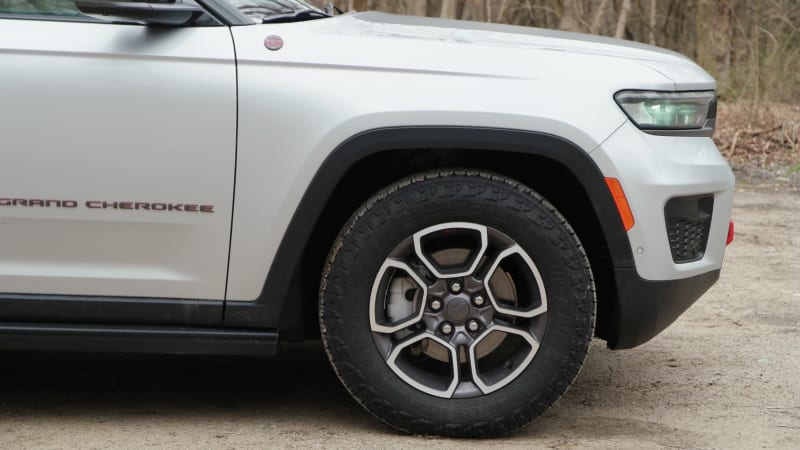 Dropping into Sport mode lowers the Trailhawk’s center of gravity, which does indeed provide the driver with more car-like responses, and we won’t complain about that. The big bulky tires, however, still wallow a lot more than lower-profile, street-oriented tires would, and there really isn’t any further electric trickery Jeep can do about that. We were content to leave the Trailhawk in Auto most of the time, letting it control itself and drop into a lowered aerodynamic stance at highway speeds.

We mentioned the Toyota 4Runner TRD Pro as a competitor for the Grand Cherokee Trailhawk, and it’s probably about as close a bogey as exists in today’s market. Compared to the $56,030 Trailhawk, the $53,635 TRD Pro feels antiquated – both by design and because it’s been around for ages. The 4Runner may be a charming old beast, but it’s less powerful, less refined, bumpier and noisier than the Trailhawk. Its interior tech doesn’t come close to comparing with the bevy of screens offered by Jeep, its gauges are, well, gauges instead of customizable digital readouts, and the suspension doesn’t increase or decrease in ride height. You also can’t get a disconnecting sway bar on the TRD Pro. Both will get drivers to their off-road destinations, but the Jeep will do so with greater comfort and refinement both on and off the pavement.

We made good use of the wet springtime conditions of the roads to test out the extra traction offered by those chunky tires and heavy duty off-road tech. Despite mucking our way through ankle-deep mud and mush, we never got close to getting stuck. Low-range gearing made quick work of the steepest inclines we could find in Central Ohio, and even though we didn’t need to use the disconnecting swaybar, we tested it out anyway on a two-row boat ramp divided by a thick concrete berm. No surprise, it increased the amount of suspension articulation and therefore the distance we could reach while straddling the gap.

The 2022 Jeep Grand Cherokee Trailhawk’s $56,030 price includes a mandatory and seemingly exorbitant $1,795 destination charge. Add $395 for any paint that isn’t solid white — our test car showed up with two-tone Silver Zynith and Black that we wished was something brighter or deeper. We’d consider the $1,295 Luxury Tech Group mandatory in order to get things like proximity entry and a power tilt/telescoping steering column with memory. Our tester’s sticker price ballooned to $61,040 with a dual-pane panoramic sunroof, the $1,095 front passenger interactive display, the highly recommended $1,495 Uconnect infotainment system on a large and impressive 10.1-inch display, and a $1,995 package that adds a useful Night Vision mode and a surround-view camera package. Buyers who want a third row are out of luck as there is no Trailhawk version of the Grand Cherokee L available – it is two-row only.

We’ll reiterate here that we tested out all this awesome off-road kit, and it works exactly as advertised. But we never actually had to test it, despite specifically looking for the grossest slop we could drive through on hunting roads only otherwise occupied by ATVs and people wearing rubber boots. All of that is to say that we applaud Jeep for offering a Grand Cherokee that’s truly capable off-road, but the Limited 4×4 that costs $5,000 less or the Overland that only costs a grand or two more would probably be better choices for drivers who don’t know why they’d need a Trail Rated badge.

But for those buyers who do know exactly why they need nearly a foot of ground clearance, the ability to ford 2 feet of water, or enough suspension articulation to straddle a mini Mount Rushmore, well, there really is nothing else on the market that also provides luxurious finishings and refinement for the price of the Jeep Grand Cherokee Trailhawk.