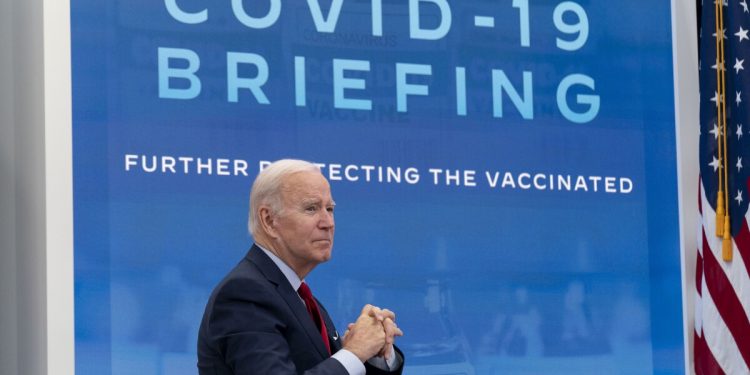 
Democrats have long known history is not on their side in the 2022 midterm elections. But as they enter this campaign year, the steep climb to keep their majorities in Congress appears even more daunting with the COVID-19 pandemic stubbornly persistent and voters concerned over inflation and crime.

The unsettled national climate — if it holds in November — will likely favor Republicans, who need just five additional seats to take control of the U.S. House and only one more for a majority in the Senate.

The sitting president’s party almost always loses ground in midterm elections — doing so in all but two such contests since the end of World War II. And Democrats hoping to buck precedent have few easy fixes for the problems on voters’ minds or for President Biden’s underwater approval ratings.

“Sometimes you have a messaging problem, and other times you just have a problem. In this situation, [Democrats] just have the latter,” said Matt Gorman, a Republican strategist who ran communications for the GOP’s House campaign arm in 2018. “No slogan or single policy achievement can turn around a broader environment. There would have to be a seismic shift.”

“Democrats are going to hold the House because we are delivering for the American people,” said Rep. Sean Patrick Maloney of New York, chair of the Democratic Congressional Campaign Committee. He pointed to millions of jobs created in the last year, as well as vaccine distribution and efforts to lower healthcare costs.

“Kevin McCarthy and his band of extremist House Republicans have yet to present a single realistic idea to move this country forward,” he said, referring to the congressman from Bakersfield who leads the GOP in the House.

There are some silver linings for Democrats.

The party probably avoided a worst-case scenario in the redistricting for the House. Though the GOP had an overall advantage in drawing the new congressional maps, so far they’ve mostly tried to shore up existing red districts instead of aggressively creating new ones, experts say.

In the Senate, Democrats are defending seats in battleground states that Biden won last year, albeit by the barest of margins in places like Arizona and Georgia. Senate races can also depend more on individual candidates, making Democrats slightly less vulnerable than their House counterparts if there is a wave election against them.

Still, “it obviously takes unique circumstances to redirect a midterm election,” said Stuart Rothenberg, senior editor of Inside Elections, a nonpartisan political newsletter. “I don’t know whether there’s anything that’s going to happen that’s so shocking to people, so stunning that it will give the Democrats the ammunition they need to change the election.”

Privately, Democratic strategists acknowledge the difficulties ahead, particularly after losing the Virginia governor’s race in the fall and barely escaping a similar defeat in deep-blue New Jersey. Those off-year races often have served as early indicators for the direction of the midterms.

The Democrats’ challenge partially lies with the nature of midterms: Supporters of the party in power are often disappointed that the president’s campaign promises have not yet been fulfilled, dampening their enthusiasm, while the opposition is motivated by unhappiness at being out of power.

Republicans, meanwhile, have a more basic task: keeping the focus on the majority party.

“The strategy for Republicans is a pretty simple one: Don’t screw it up,” said Ken Spain, former spokesman for the National Republican Congressional Committee. “Don’t make yourself the issue and allow the election to be a referendum on Democratic control of Washington.”

Distilling the party’s campaign message, Emma Vaughn, a spokesperson for the Republican National Committee, kept the focus tightly on Biden.

“Biden has lost all credibility — he has failed to ‘shut down the virus’ like he promised, pushed Americans out of work with unconstitutional mandates, overseen a rise in crime, presided over skyrocketing prices for everyday goods and promoted trillions more in reckless spending,” she said.

But former President Trump’s fixation on relitigating false allegations of fraud in his 2020 loss and his battles against the few Republicans who have broken from “Make America Great Again” orthodoxy threaten to distract from that focus and draw attention to intraparty battles.

Trump has been actively involved in midterm campaigns — endorsing preferred candidates and lashing out against Republicans he dislikes. That may hobble his party, which needs to appeal to Biden voters to win key House districts and Senate seats.

“Republicans are locked in a series of vicious nasty primaries,” said David Bergstein, communications director for the Democratic Senatorial Campaign Committee. “They’re either putting forward flawed candidates, or they’re fighting with each other in a way that ensures whoever limps out of their primaries will be cash poor and deeply damaged.”

The other big unknown factor is whether the issues of concern to voters will shift between now and November. Currently, the unsettled economy, COVID-19 and rising rates of violent crime all cut against Democrats.

Voters see the economy as their top concern, according to a recent CNBC/Change Research poll, and nearly three-quarters see it as being in “poor” or “not so good shape.”

Americans are especially worried about higher prices for groceries and other goods and are pessimistic that inflation — which jumped nearly 7% in the last year — will ease in the near future, the survey found. The White House has tapped into federal oil reserves to ease gas prices and explored antitrust enforcement against the meat industry to tackle food costs, but tools for combating inflation are limited.

More troubling for Democrats is that Biden does not get much credit for the bright spots in the economy. The CNBC poll found that nearly half of voters believe the stock market is in poor or not so good condition, when it in fact has reached record highs. Despite the passage of a massive stimulus bill that included widespread cash aid, just 21% of voters said the plan helped them.

Much of the uneasy perception of the economy is due to the lingering pandemic, which continues to disrupt any sense of normality.

The current Omicron wave is not as severe as those in the past, especially for those who are vaccinated. But it has still had a widespread impact on schools and businesses.

“Even if Democrats achieve popular things like lower-priced prescriptions and childcare, we could still lose in 2022 if people feel chaos from COVID in their daily lives,” said Adam Green, co-founder of the Progressive Change Campaign Committee.

Public safety is another likely campaign issue. While the overall picture is mixed, including a decline in property crimes in many places, homicides and other violent crimes have trended upward in many cities.

David Paleologos, director of the Suffolk University Political Research Center, said voters in his surveys of metropolitan areas are increasingly concerned about crime.

“Where it matters is in the suburbs — the crossover voters who abut big cities, who are influenced and whose quality of life is influenced by crime in close cities,” Paleologos said. “That’s where a Democrat flips” to voting for the GOP.

Democratic strategists say they’ll counter by emphasizing the party’s achievements, including last year’s COVID relief and the $1.2-trillion infrastructure package. They also hope to campaign on Biden’s “Build Back Better” plan, a package expanding the social safety net and combatting climate change — if congressional Democrats manage to pass it.

“One big lesson both in the 2020 congressional elections and the 2021 Virginia election is that being anti-Trump or anti-Republican is not enough,” Green said. “The winning message has to boil down to: Democrats made popular promises, and we fulfilled them, while Republicans would overturn them and block future things that would help you.”

But the messy negotiations over Build Back Better — in which many liberal priorities have been discarded to appeal to conservative Democratic Sens. Joe Manchin of West Virginia and Kyrsten Sinema of Arizona — may already have blunted its electoral impact.

Spain, the former NRCC spokesman, said the price tag will alienate independents, while Democrats will be disappointed by its reduced size.