2022 NFL Draft: Draft a QB in the first round or wait? What the Panthers, Seahawks and others should do 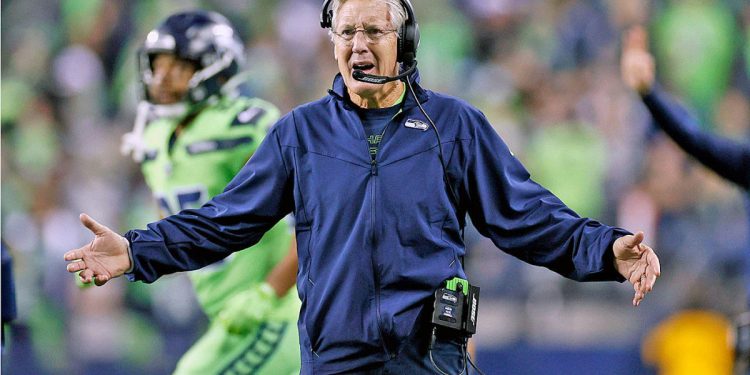 
It is a quarterback-driven league so it should come as no surprise that quarterbacks are dominating conversations around the NFL. Despite the Deshaun Watson, Russell Wilson and Matt Ryan trades, plus Tom Brady’s prompt return, there is more clarity on which teams may be interested in upgrading at the quarterback position, but the first round outlook is still murky.

CBS Sports explores the teams that could be in the mix for a quarterback, how past decisions inform their decisions, outlines the options available to each and makes the call on whether each team will pick a quarterback in the first round or wait to address it down the road.

Washington surrendered significant draft capital for Carson Wentz prior to the other quarterback dominoes falling. Then and now, it looks like a terrible decision. The two most loyal figures to Wentz were Colts head coach Frank Reich and the entire Eagles organization. Both gave up on the North Dakota State product over the past year and a half. It is only a matter of time before a similar fate for Wentz plays out in the nation’s capital. As it stands, the team is unlikely to take a quarterback this year. They should wait.

The Ryan trade has played out and that means Atlanta is left with Marcus Mariota. It may be in the organization’s best interest to draft a non-quarterback and upgrade the rest of the roster. If a rookie quarterback is thrown onto that roster and asked to contribute in 2022, it is not going to go well.

I tend to think that if the Falcons evaluated the position last year and did not find someone to their liking, then that will be the case this year as well. It might be more tempting to conserve draft capital and target Ohio State’s C.J. Stroud, Alabama’s Bryce Young, Kentucky’s Will Levis, etc. … in 2023. They should wait.

A year ago, I was one of the few who defended the idea that Detroit actually views Jared Goff as an asset rather than a burden on the salary cap. The reasoning is that the Lions seemed to have better offers for Matthew Stafford in regard to draft capital based on the reported terms with Carolina. A year into the marriage, Goff has done enough to not be considered a throw away. When compared to some of the options available in this draft class, there is not a clear and obvious upgrade at the position. The team may be better served running it back with Goff and adding talent at other spots, including wide receiver. Detroit has the No. 2 and No. 32 overall selections in the 2022 NFL Draft. If they choose, they could target a developmental quarterback with that second choice knowing that they would have more flexibility with the fifth-year option. They should wait at No. 2 overall but No. 32 overall could be intriguing dependent upon how the board falls.

Carolina could give Sam Darnold another season considering it has committed to a fifth-year option but it is not a figure prohibitive of drafting a quarterback. Owner David Tepper is impatient and aggressive. The Panthers did not land Watson in a trade despite public pursuit. Quarterbacks are not going to want to play there until the rest of the roster comes together. Their options are limited to acquiring another veteran like Cleveland’s Baker Mayfield or drafting a quarterback. It has been discussed that they could trade back and take a quarterback because they do not have any Day 2 picks. If they truly like a quarterback enough, then they should stick and pick that player rather than allowing another team to be aggressive in possibly stealing that player. They should wait until the rest of the roster rounds into form.

New Orleans pursued a trade for Watson but that obviously did not pan out. The response to that decision was re-signing Jameis Winston. A two-year deal for Winston does not exclude the Saints from being in the mix for a rookie quarterback. Their situation is similar to that of Washington. The franchise could play the veteran until a rookie of choice is ready to take over, but actions suggest they feel they are just a few players away from being competitive in the NFC. They should wait, but they also should not have traded away their 2023 first-round pick.

Seattle is facing a scenario in which Geno Smith or Drew Lock are the starting quarterback in 2022. Denver has essentially been chasing the same tail in recent years and it ultimately broke them to the point they had to acquire Wilson. If the NFC West franchise does not acquire Mayfield, then a quarterback is absolutely in the mix at No. 9 overall. There are several areas of weakness on the current roster but the NFC is less competitive than it had been a year earlier. By trading for Mayfield, Seattle would be able to take another blue-chip talent in the first round. The roster needs an infusion of talent, specifically along the offensive line, before throwing a rookie quarterback onto the roster. They should wait.

Pittsburgh’s situation is similar to that of New Orleans and Washington. By signing Mitchell Trubisky, they have a veteran in place to remove some of the stress of finding a replacement for Ben Roethlisberger. No one, including the Steelers, expects Trubisky to be a long-term solution at the quarterback position. If the team had that vision, he would have been signed to a longer or more lucrative deal. The AFC North franchise should absolutely be in the conversation as one that could draft a quarterback at No. 20 overall or trade up in the first round. It makes sense for them to take a chance on a player like Willis in the first round because of the foundation that they have in place. They should pick a quarterback in the first round.

Houston has finally moved on from Watson and it is evident — as it has been for months — that they intend to give Davis Mills a chance, which is a wise move. The No. 3 overall selection is too rich for one of these quarterbacks and none offer a significant upgrade over the incumbent. Houston should use its draft capital to bolster the auxiliary pieces of the roster, allow Mills to compete next season, and then decide if pursuing a quarterback is in the club’s best interest in 2023.

Under the current terms of Ryan Tannehill’s contract, it does not make sense to move on from him this offseason. It would cost them an additional $19 million for him to play elsewhere. Management is faced with the decision to draft a quarterback and let that player sit for a year or just wait and address the position the following offseason.

If Tennessee drafts a quarterback with Tannehill on the roster, then it could get awkward much like the situation between Green Bay and Rodgers two years ago. At 33-years-old, the Texas A&M product probably feels as though he still has some football left in him and would not welcome assets being used on his eventual replacement. They should wait.

General manager Kwesi Adofo-Mensah has shown that he believes he can win with Kirk Cousins. He is not going to take a competent starting quarterback for granted and that was evident when they tacked on an additional year to his contract. They see a depleted NFC and are making a move this year. They should wait.