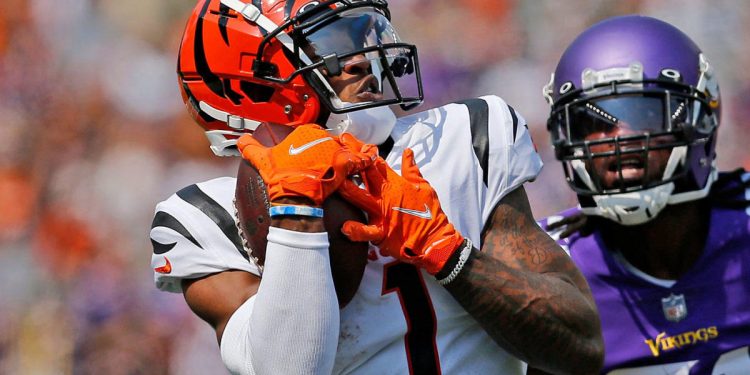 
With the NFL extending its regular season by one week, the 2022 Super Bowl is being played in mid-February. Casual and professional bettors alike will see the Los Angeles Rams take on the Cincinnati Bengals at SoFi Stadium on Sunday. There, the Rams will hope to take advantage of playing a Super Bowl at their home field just as the Buccaneers did a season ago. Joe Burrow and the Bengals have proven that they’re not intimidated after going into Arrowhead Stadium and defeating Patrick Mahomes and the Chiefs in the AFC Championship Game two weeks ago.

Kickoff is set for 6:30 p.m. ET. Los Angeles is a four-point favorite and the over-under for total points scored is 48.5 in the latest Super Bowl 56 odds from Caesars Sportsbook. Before you make any Rams vs. Bengals picks, you need to see the Super Bowl 56 predictions and betting advice from SportsLine NFL expert Brett Anderson, considering the heater he’s on.

A CBS Sports NFL editor, Anderson has been covering the NFL and other sports for 25 years, from the Midwest to Midtown Manhattan to South Florida. He joined his first NFL picks pool at age 12 and has been hammering home underdogs ever since. His strategy is a hybrid of data, game film and gut instinct.

For the past three seasons, Anderson has emerged as one of SportsLine’s most profitable NFL experts and is looking to build on what has been another outstanding season. The NFL analyst has posted a record of 22-9 on NFL picks throughout the 2021-22 NFL season to net his followers a profit of more than $1,200.

What’s more, he has gone 3-0 on his against-the-spread picks in the 2022 NFL playoffs. These picks include advising SportsLine members to take the San Francisco 49ers +3.5 against the Los Angeles Rams in the NFC Championship Game. San Francisco squandered a double-digit lead, but still covered the number in the 20-17 loss. Anyone who has followed Anderson is way up.

Now, Anderson has locked in on Rams vs. Bengals from every angle and just released his Super Bowl 56 picks and predictions. You can head to SportsLine now to see his picks. Here are the NFL odds and betting lines for Rams vs. Bengals:

Why the Rams can cover

For the first time all season, the Rams could have their entire backfield in uniform and healthy for Super Bowl 56. The trio of Sony Michel, Darrell Henderson and Cam Akers would arguably be the deepest and most potent in the NFL. For most of the season, the Rams used a one-two punch of Henderson and Michel, with Henderson as the lead back and Michel providing change of pace and short-yardage runs. A torn ACL was expected to keep Akers out the entire season, but his unexpected early return has given the Rams a boost while Henderson has been sidelined since Week 16 with a sprained MCL, but was activated from the IR on Friday.

Akers he leads the team in the 2022 NFL playoffs with 151 rushing yards, while Michel is second with 78. Henderson has provided a threat in the passing game, with 29 catches for 176 yards and three touchdowns in the regular season.

Why the Bengals can cover

Cincinnati comes into the game off a thrilling overtime win against the Chiefs in the AFC Championship Game. The Bengals erased a 21-3 deficit with 21 unanswered points and then got a field goal from Evan McPherson to win the game. It was McPherson’s second consecutive week kicking a walk-off field goal and the rookie has proven that he’s not intimidated standing over a critical kick with the game on the line.

Cincinnati’s defense shined in the second half, limiting Mahomes and the Chiefs to just three points. In the game, the Bengals sacked Mahomes four times and forced two turnovers. Sam Hubbard and Trey Hendrickson combined for 3.5 sacks and they’ll be looking to apply similar pressure against Matthew Stafford, who was sacked 14 times in the Rams’ last four losses this season.

How to make Rams vs. Bengals Super Bowl picks

For Super Bowl 56, Anderson is leaning under on the point total, but he also says a critical X-factor makes one side of the spread a must-back. He’s only sharing what it is, and which side of the 2022 Super Bowl spread to back, at SportsLine.