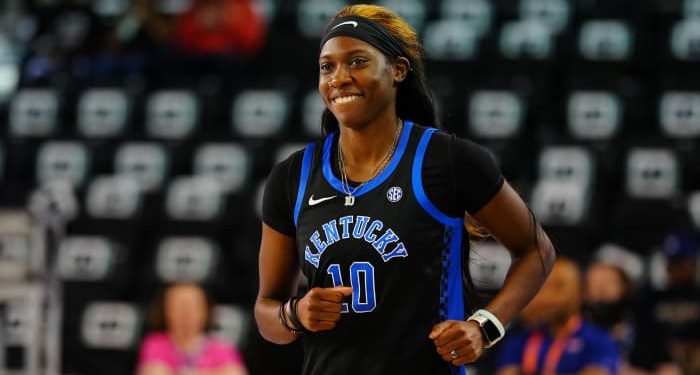 
The 2022 WNBA draft is in the books. After trading their No. 3 and No. 14 picks for the No. 1 selection ahead of the draft, the Atlanta Dream selected what could become their franchise player in Kentucky’s Rhyne Howard. Fever general manager Linn Dunn sought to restore Indiana to Eastern Conference contention as the franchise became the first team in WNBA draft history to have four first-round picks, which were used on NaLyssa Smith, Emily Engstler, Lexie Hull and Queen Egbo—in the first round. Washington returned Ole Miss center Shakira Austin closer to home with the Mystics selecting her at No. 3 while the Aces pulled off perhaps the biggest steal in the draft by selecting Florida Gulf Coast star Kierstan Bell at No. 11.

While the draft was centered on new players entering the league and witnessing their dreams come true, the night also focused on the efforts of bringing home Mercury center Brittney Griner, who has been detained in Russia since February. WNBA commissioner Cathy Engelbert called Griner’s situation as a “top priority” in her opening statement at the draft and that “everybody in our ecosystem” wants to ensure Griner’s safe return from Russia.

In a draft that featured a ton of talent at various positions, here are the winners and losers of Monday’s draft.

After dealing their No. 3 and No. 14 picks ahead of the draft, Dream first-year general Dan Padover and head coach Tanisha Wright landed a franchise piece in Howard and one that “fits the direction” of where the team is rebuilding for the future. Howard, a three-level scorer and an unanimous first-team All-American in 2021, averaged 20.5 points while also posing a problem for opponents on defense, posting 2.3 steals per game. “We think the sky is the limit for her … she has tons of potential that really hasn’t been tapped into yet,” Wright said. “She has a quiet competitiveness that I believe our league will bring out of her.” As the Wildcats’ second all-time leading scorer (2,290 points) for men and women, Howard told ESPN’s Holly Rowe that being drafted on Monday was a “dream come true.”

In addition to Howard, Atlanta getting Naz Hillmon—who was projected as a late first-round pick—at No. 15 gives the Dream a player who brings high energy, sets good screens, scores efficiently and grabs offensive rebounds for second-chance points opportunities. “Both women [Howard and Hillmon] fit the type of players we want in our organization for the future,” Wright said. The two will join a Dream roster that features Kia Vaughn, Erica Wheeler and Nia Coffey from free agency acquisitions as well as Monique Billings and Aari McDonald.

The first three to five picks in the draft—Howard, Smith, Austin, Engstler and Sabally—were pretty much spot on. But after those selections, things started to go off the rails. Indiana, who went with a surprise selection in the 2021 WNBA draft in selecting West Virginia’s Kysre Gondrezick, also started the shakeup of mock drafts in 2022 when it selected Stanford’s Lexie Hull on Monday night. Hull was followed by Northwestern’s Veronica Burton—who was widely projected as an early second-round choice—Colorado’s Mya Hollingshed to the Aces, Tennessee’s Rae Burrell to the Sparks and Egbo (another projected second-rounder) before Bell at No. 11. It was a huge shock to see South Carolina’s Destanni Henderson slip to the latter part of the second round. In short, it was another reminder of how meaningless the mock drafts can be. All the truth and decision-making resides with the teams’ general managers.

When the Aces acquired the No. 8 and No. 13 picks to give them five selections in the draft, it sent a message that first-year head coach Becky Hammon saw an opportunity to capitalize and add top-end talent to an already loaded Aces’ team. While the selection of Hollingshed—a projected late second-rounder to early third-rounder—came as a shock, the biggest steal came with the Aces selecting Bell at No. 11. The FGCU star—an Ohio State transfer—averaged 23.5 points, 2.2 assists and 7.5 rebounds per game last season. Her versatility could allow her to play the three or four position in the league, and it also helps that Hammon favors the same five-out style on offense that Bell thrived In under FGCU head coach Karl Smesko.

Las Vegas taking Khayla Pointer at No. 13 gives the Aces another point guard who can run the offense and knock down a three-pointer, and could end up being a valuable asset behind Aces guards Chelsea Gray and Kelsey Plum.

This category is not in reflection or representation of Henderson on the court. Absolutely no one saw Henderson slipping to the latter half of the second round. The Gamecocks star guard, who was projected as a late first-rounder, played a huge role in leading South Carolina to a national championship last Sunday and finished the season as a first-team All-SEC selection. She averaged 11.5 points and 3.9 assists per game this season but scored a whopping 26 in the Gamecocks’ victory in the title game while playing swarming defense as the primary defender on UConn’s Paige Bueckers. Henderson always plays with a chip on her shoulder. Don’t be surprised if “D-Henny”—with her elite quickness, high basketball IQ and exceptional playmaking skills on both offense and defense—becomes a breakout player among WNBA rookies this season.

Even further, Jackson State’s Ameshya Williams-Holliday, who averaged 19.2 points and 11.4 rebounds while ranking 15th in rebounds and tying for 16th in the country in win shares per HerHoopStats, became the program’s first-ever draft pick at No. 25 to Indiana. Williams-Holliday is only the sixth HBCU player to be drafted to the WNBA and the first in 19 years. When she takes the court for a game, she will be only the third HBCU player to do so behind Howard’s Andrea Gardner and Denique Graves. This is a reminder how the WNBA’s scouts, coaches and general managers will always find and secure exceptional talent.

The landscape of the W is never limited to basketball. The fits and wardrobe discussion can be just as important as the game played on the court to some fans. While there are a ton of athletes who dress to impress—Connecticut’s Jasmine Thomas and DiJonai Carrington, Phoenix’s Te’a Cooper, New York’s Didi Richards and Los Angeles’s Liz Cambage to name a few—the rookies brought the heat. From Howard (who honored her late, close friend, Terrance Clarke on the lapel of her outfit) to Austin’s fierce attire and Bell’s and Henderson’s suits, the latter of which included custom shoes designed by Henderson, the bar was raised a notch. It is safe to say that WNBA fans can expect to see more electrifying outfits next season.

Curt Miller already had a talented team before Monday’s draft. The Sun, which feature reigning MVP Jonquel Jones, ’21 Most Improved Player Brionna Jones, DeWanna Bonner, Alyssa Thomas and Courtney Williams, added to their talent by choosing Michigan State’s Nia Clouden at No. 12, Baylor’s Jordan Lewis—who could quietly be another steal in this year’s draft at No. 24—and Florida’s Kiara Smith with the final selection in the draft.

The biggest thing for Connecticut to solidify itself to compete for a WNBA title is adequate health, something that limited the Sun last season. Clouden’s confidence is contagious, she is crafty and she has the ability to stretch the floor and knock down three-point shot opportunities. Lewis, the Alabama transfer who was named the Big 12 Newcomer of the Year, averaged 11.8 points, 3,8 rebounds and 5.3 assists this season. Her three-point shooting, which she improved each year of her college career, will be a huge asset for Connecticut. Smith, who averaged 14.6 points, 5.5 rebounds. 4.6 assists and 2.4 steals per game, earned first-team All-SEC honors while also becoming the third Gator to be named to the SEC All-Defensive team. Miller likes strong defenders.