In so many key ways, the 2023 Volkswagen ID.4 makes a ton of sense. It’s bigger than its EV rivals and comparably sized to hybrid compact SUVs, making it the most family friendly of reasonably priced electric cars. And it’s indeed reasonably priced, starting at less than $40,000 for the new standard battery or about $45,000 for the bigger, 275-mile-range battery. Better still, the 2023 ID.4 is made in Tennessee, which could benefit it in terms of the Inflation Reduction Act’s new EV tax credit requirements (the final parameters of that were still unknown at the time of this writing). Add in its ample equipment and surprisingly sporty driving experience, and you get a very appealing package.

But you just know there’s a “but” coming. Unfortunately, despite some welcome interior updates for 2023, Volkswagen did nothing to address the ID.4’s poorly designed touchscreen interface and touch-sensitive interior controls. Quite simply, they’re so frustrating to use and the wonky touchscreen controls so many vehicle elements that we cannot recommend the entire vehicle. Go ahead and give it a long, thorough try, though. If you can live with it, the ID.4 still has a ton to offer.

There are significant changes and additions to the ID.4 lineup for 2023. First, there’s a new base model with a lower range (208 miles) and a lower price ($38,790). Second, every ID.4 comes standard with Plug&Charge capability, meaning you simply plug the car into an Electrify America station without worrying about using the app or tapping a credit card. Third, there are subtle design tweaks (gloss black accents up front, new wheel designs and an illuminated VW rear badge on S models), upgraded interior materials and snazzier color schemes. All of the above helps counter the impression that the ID.4 was a little dull. Finally, the ID.4 is now built in Chattanooga, Tenn. 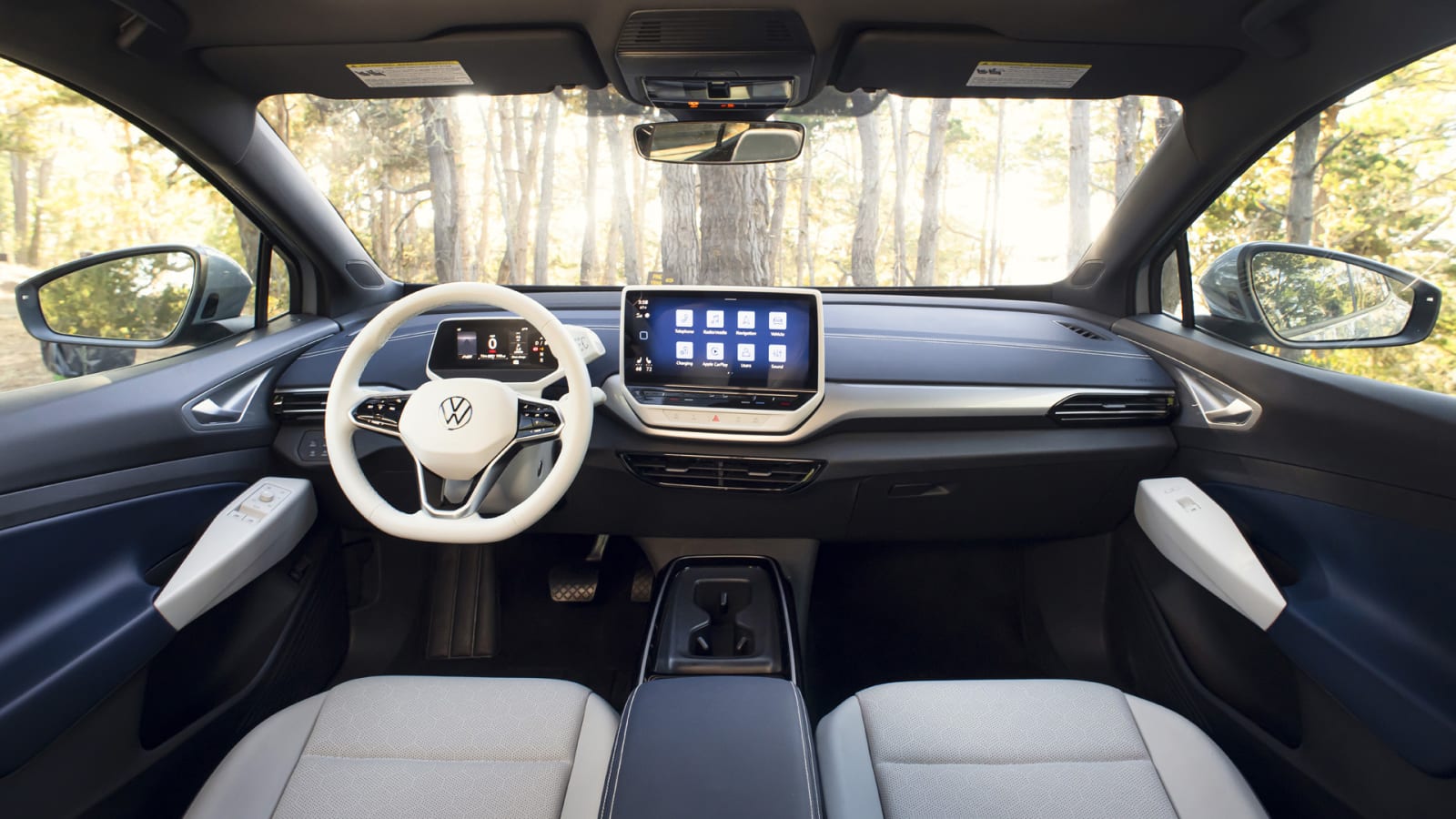 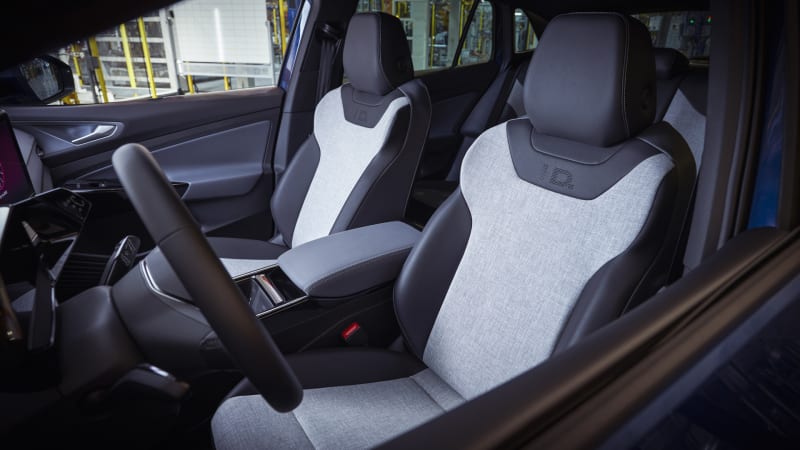 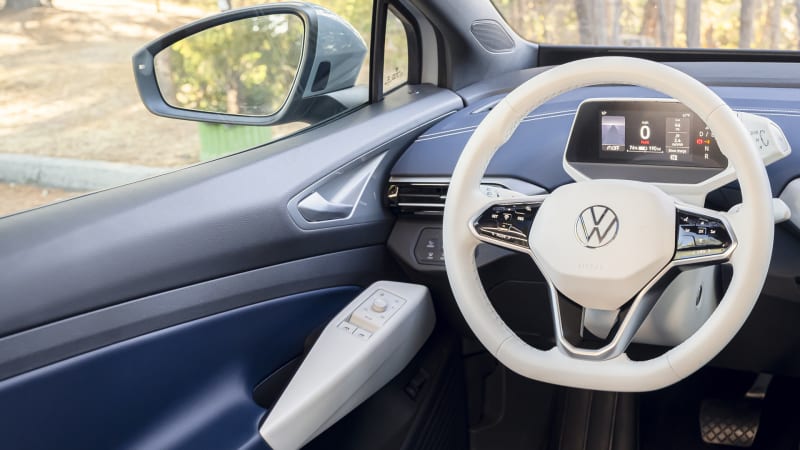 What are the ID.4 interior and in-car technology like?

There are big changes for the 2023 ID.4, and while welcome, they don’t address our major complaints with the car that largely prevent us from recommending it. First, though, the updates. Every ID.4 now comes standard with the larger 12-inch touchscreen and the minivan-style seat-mounted armrests have been replaced by a traditional padded center console bin lid/armrest. Materials have also been improved and snazzied up. A new “mélange and leatherette” replaces the base cloth upholstery, and is available in either a Stone theme that features black and gray accents (pictured above left), or a Nutmeg theme that has brown hues. The upgrade S trims still have full leatherette, but they’re now available in either a Galaxy theme that features black and gray elements, or a new Cosmic theme that pairs gray, white and blue. It’s pictured above, top.

None of the above likely addresses thoughts that some underlying plastic pieces are on the cheap side, but there’s no denying that the ID.4 cabin could use the style enhancements its received for 2023. Some chintzy plastics weren’t our main concern, however. The ID.4 gets a revised instrument panel display with more information presented (a good thing, pictured below left), but nothing was done to correct the slow and poorly organized touchscreen infotainment system that pretty much single handedly prevents the ID.4 from being amongst our top-recommended EVs. It’s a nightmare to use (especially for those old fogies like us still using satellite radio) and is paired with another unaddressed sin: the touch-sensitive climate, volume and menu controls that are difficult to identify and press during the day, and virtually impossible to identify and press at night since they are not illuminated. VW didn’t add proper rear window controls for the driver’s door, either — there’s still only two window switches and a toggle that you use to select the front or rear windows (pictured below right). It’s as annoying as that sentence makes it sounds. So, the blue leatherette is nice and all, but we’d rather be able to turn up the temperature and change a radio station without pulling our hair out. 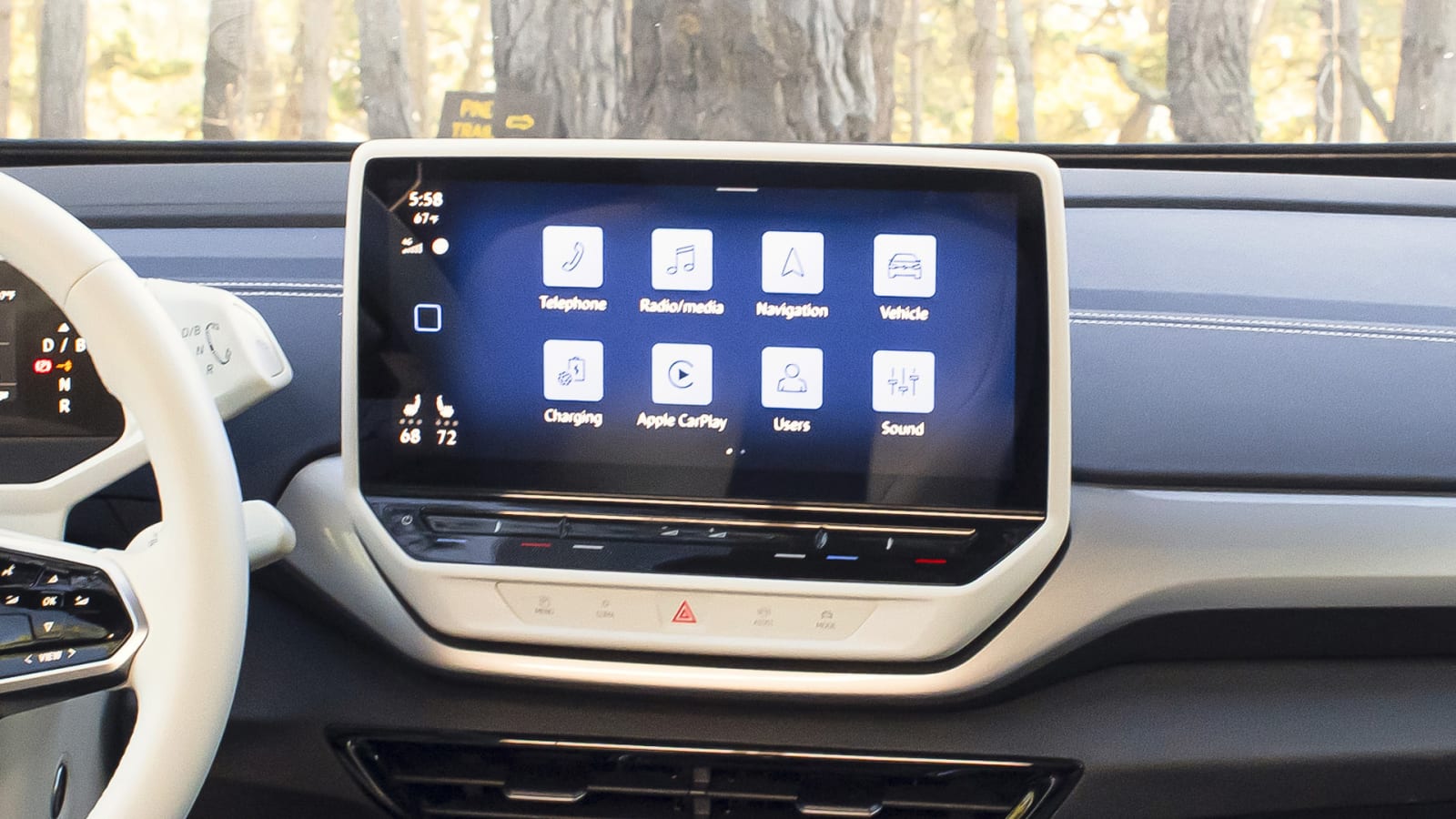 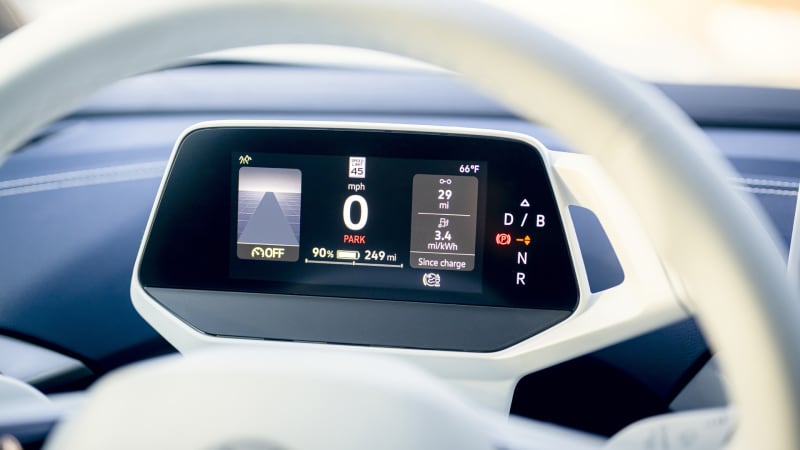 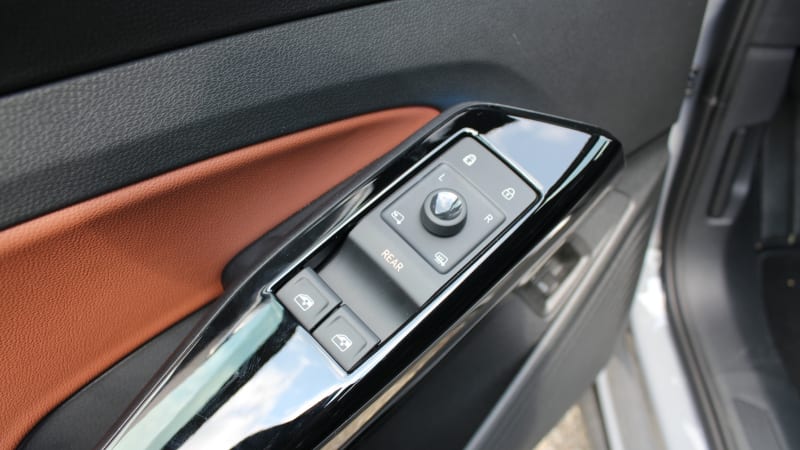 If you look at the specs, you’ll see the VW ID.4 is right in the middle of the compact crossover bunch. However, its electric architecture makes it a Granny Smith in a basket of Galas. Yes, it’s not as long as a Honda CR-V or Toyota RAV4, for instance, but its wheelbase is considerably longer. That’s best seen in the truly gigantic back seat. We were able to fit an enormous rear-facing Britax Boulevard child seat behind both the passenger and driver seat set for a 6-foot-3 driver. That means you can fit two rear-facing car seats in the back seat, a rarity, while also equating to palatial legroom for big kids and adults. Heck, go ahead and bring along a few basketball players.

Admittedly, the ID.4’s prime electric competitors, the Hyundai Ioniq 5 and Kia EV6, have similarly generous passenger space due to similar architectural reasons. However, the VW is higher off the ground and SUV-like making loading those kids into their car seats a bit easier. VW also holds a decisive advantage in terms of cargo capacity. It has 30.2 cubic-feet of space behind its back seat, which lands it in the middle of the compact SUV pack while blowing away the EV pack. In our ID.4 cargo area luggage test, the ID.4 falls short of mega-carriers like the RAV4 and Hyundai Tucson hybrids, but easily swallowed more stuff than the EV6, Ioniq 5 and Mustang Mach-E. 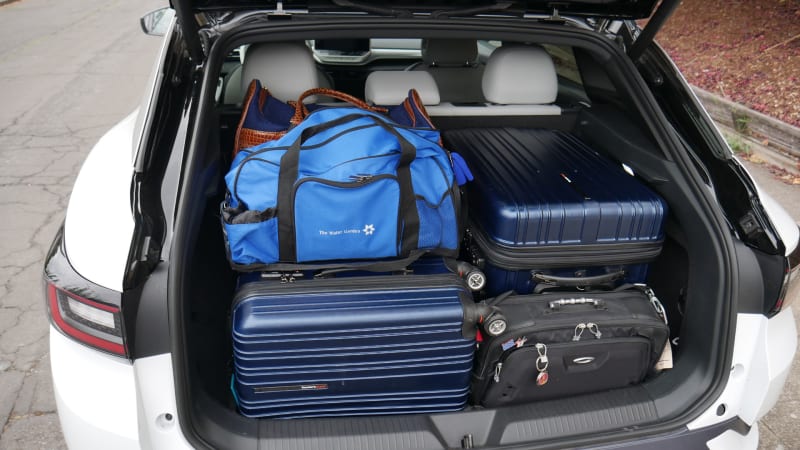 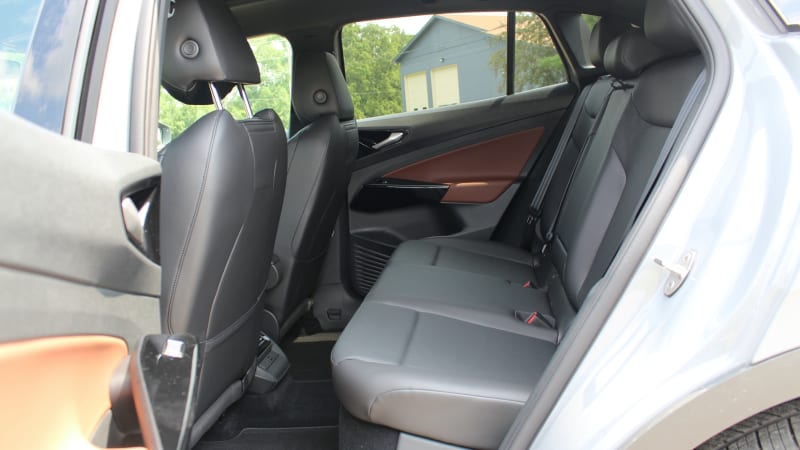 What are the ID.4 range, battery and performance specs?

For 2023, the ID.4 is available with a choice of batteries and either rear- or all-wheel drive, which alter how much performance and range you get.

The new ID.4 Standard powertrain gets a 62-kilowatt-hour battery that achieves a VW-estimated 208 miles. Its single rear motor produces 201 horsepower.

The ID.4 Pro trims have the same rear motor and output, but gets a bigger 82-kWh battery that yields an EPA-estimated 275 miles of range for the base Pro and 262 miles for the Pro S. You can expect a 0-60-mph time in the mid-8 second range, which may be a bit slow by EV standards, but is totally normal for a compact SUV.

The ID.4 Pro AWD trims add a motor to the front axle for through-the-road all-wheel drive. Total output increases to 295 horsepower and the 0-60 estimate plummets to 5.7 seconds. That’s blisteringly quick for a compact SUV, though slower than the AWD versions of the more powerful EV6 and Ioniq 5. Range lowers to a still-competitive 255 miles for the base AWD Pro and 245 for the AWD Pro S.

As for charging, the ID.4’s max charge speed is 135 kW, which is less than the Mustang Mach-E (150 kW) and way slower than the EV6 and Ioniq 5 (240 kW). On the upside, the ID.4 comes standard with three years of free charging at Electrify America stations, plus the convenience of simply plugging the car in without worrying about consulting the EA app or using the credit card at a station. 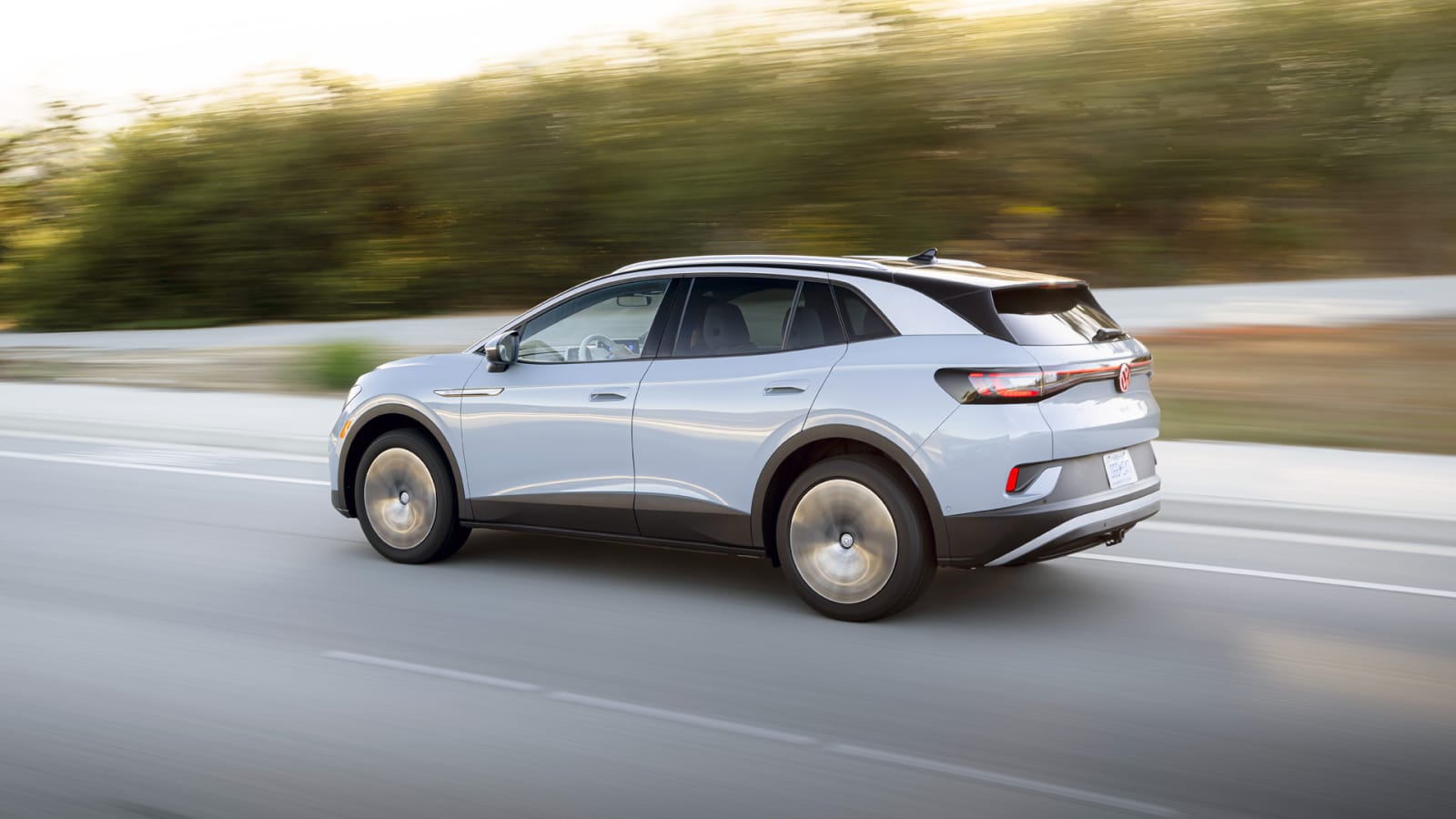 We have yet to drive the new base ID.4, and although its smaller battery pack could in theory make it a bit quicker and lighter on its feet, we doubt it’ll make that big of a difference. Stay tuned, though!

Otherwise, Volkswagen’s performance bullseye with the ID.4 was compact SUVs rather than neck-snapping, high-performance EVs. You still get the immediate, smooth and utterly quiet power delivery of an EV, which makes it feel far more potent in around-town driving than the Honda CR-V’s of this world. But should you merge onto the highway, you’ll find the limitations of its horsepower result in ultimate acceleration that’s best described as “sufficient.” Stepping up to the more powerful all-wheel-drive model does improve things, but not to the extent of a Kia EV6 GT or one of the more powerful Mustang Mach-E models. To be clear, that’s more a factual statement than a complaint.

As for its ride and handling, the ID.4 quite clearly sprouted from the European branch of the Volkswagen family tree that spawned the Golf rather than the American one featuring bigger, cushier cars like the Tiguan and Jetta. The ride is firmer and more controlled, and the steering more immediate and connected in its responses (though still awfully numb). When combined with its ultra-low center of gravity and rear-wheel-drive architecture, it all amounts to a surprisingly fun crossover to drive. We actually enjoyed flinging it around a mountain more than the Mustang Mach-E, a result that was just as surprising to us.

That said, the ride does let you feel more impacts from poor pavements, so some may lament the ID.4’s European feel. There’s also quite a lot of road noise, and despite the brake pedal having a natural feel to it, we wish we didn’t have to use it so much. The ID.4 doesn’t provide a heavy regenerative braking mode that allows for so-called one-pedal driving. It does have “B” mode that results in braking when you lift off the throttle, but the amount is comparable to the “low” modes of other EVs.

What other VW ID.4 reviews can I read? 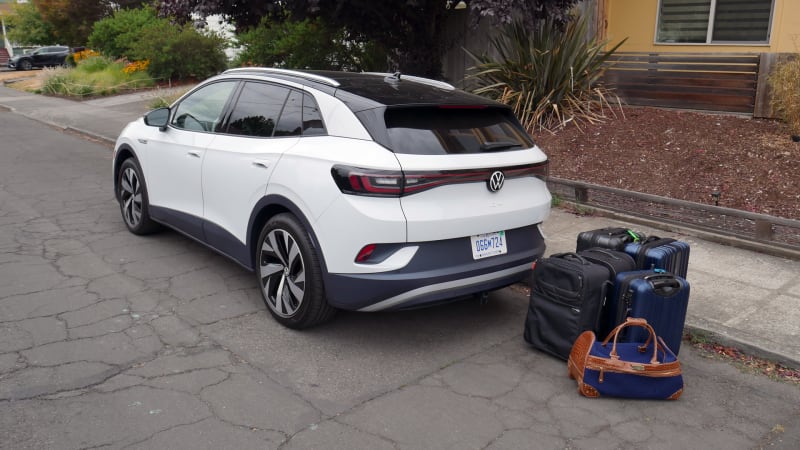 Sure, it’s an EV, but it’s also an SUV. How does it do with SUV stuff? 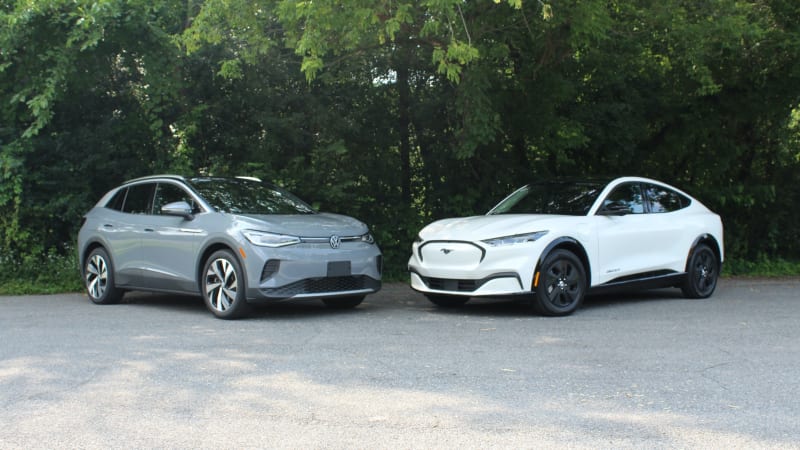 We put the two long-range, rear-wheel-drive EVs head to head. 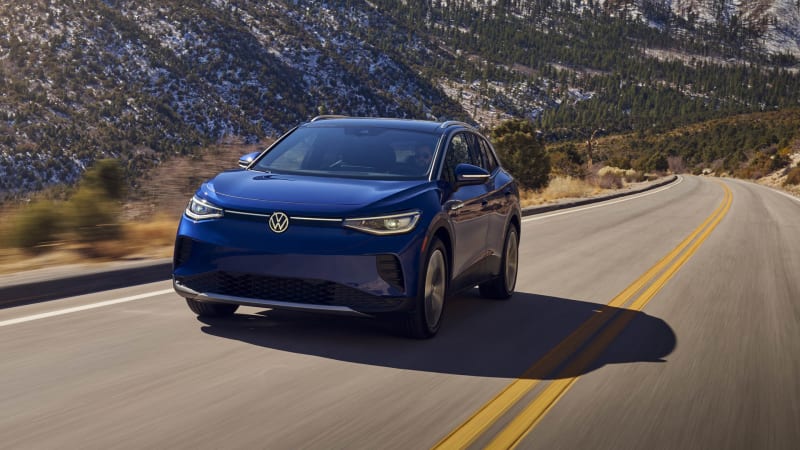 Mainstream approach seems right, but will it get lost in the shuffle?

The ID.4 is available in seven trim levels, which feature different combinations of battery, drivetrain and equipment. If it has “Pro” in the name, it has the big battery. If it has “S,” it has more equipment, and if it has “S Plus” it has even more. 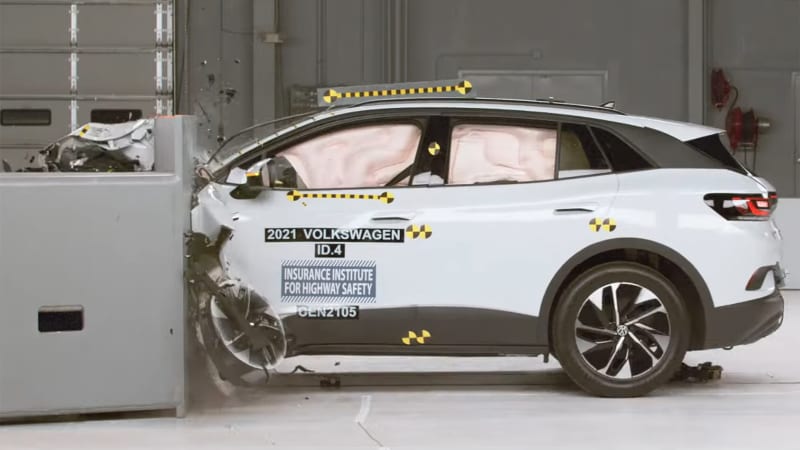 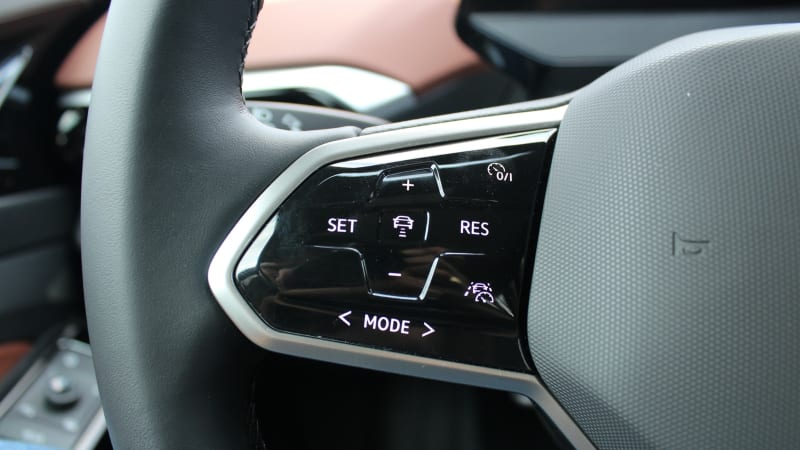 What are the ID.4 safety ratings and driver assistance features?

NHTSA gave the ID.4 a perfect five stars for overall, frontal and side crash protection. The Insurance Institute for Highway Safety named it a 2022 Top Safety Pick+ for its best possible crash ratings and sufficiently high ratings for its headlights and automatic emergency braking system.

If you're a heavy-duty truck...

It's not clear whether those...