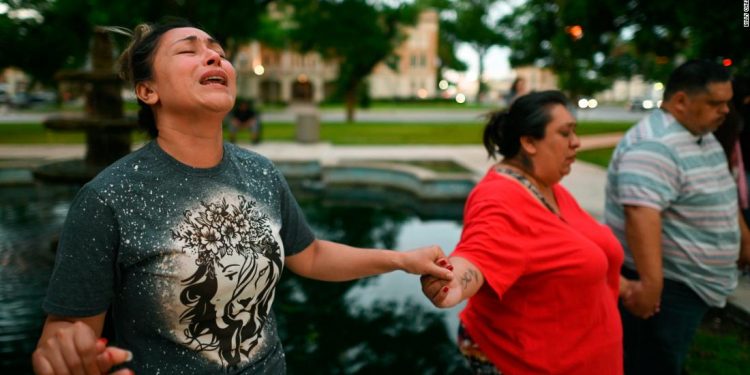 Minutes before his deadly assault in Uvalde, Texas, the shooter, Salvador Ramos, allegedly sent a series of chilling text messages to a girl he met online, describing how he had just shot his grandmother and was going to “shoot up a(n) elementary school.”

According to screenshots reviewed by CNN and an interview with the teenage girl, who said she had been in contact with the gunman for weeks, Ramos complained about his grandmother being “on the phone with AT&T abojt (sic) my phone.”

Six minutes later, he texted: “I just shot my grandma in her head.”

The 15-year–old girl, who lives in Frankfurt, Germany, said she began chatting with Ramos on a social media app on May 9. Ramos sent the girl selfie videos and discussed a plan to go visit her in Europe, according to videos and text messages.

In one message, he sent her a screenshot of a Google flight itinerary from nearby San Antonio. “I’m coming over soon,” he wrote.

She said Ramos told her on Monday that he received a package of ammunition.

She said he told her that the bullets would expand when they struck somebody.

At some point, the girl asked what he planned to do. She said he told her it was a surprise and to “just wait for it.”

The girl, whose mother gave permission for her to be interviewed, said she spoke daily on FaceTime with Ramos. She said she also communicated with him via a social livestreaming app called Yubo and played games with him on a gaming app named Plato. In their conversations, she said he asked about her life in Germany. “He looked happy and comfortable talking to me,” the girl said. She said he told her that he spent a lot of time alone at home.

There were other text messages, however, that alarmed her. In one case, she said, he told her that he “threw dead cats at people’s houses.”

She said she got the impression that he kept to himself.

“Every time I talked to him,” she said, “he never had plans with his friends.”

"This Is Us" Just Ended After Six Seasons, And Heres Why People Are Emotional Over The Perfect Series Finale - BuzzFeed