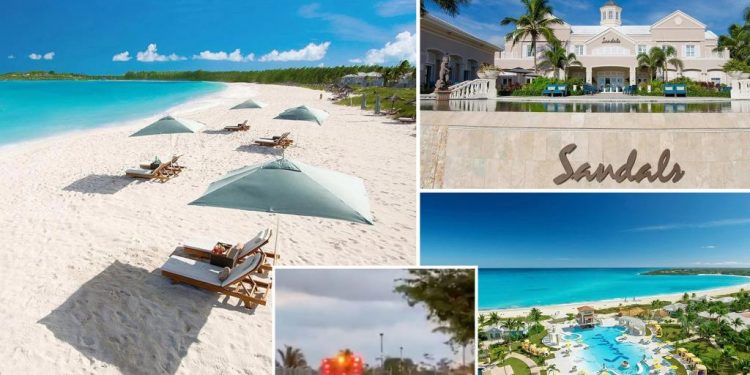 Three Americans were found dead in a luxury resort in the Bahamas, and a fourth was airlifted to a hospital, according to authorities.

The guests died at the Sandals Emerald Bay resort on Exuma, and were identified as Americans by Chester Cooper, the Bahamas acting prime minister, who said foul play was not suspected. Cooper is also the nation’s tourism minister.

Hotel staff called authorities around 9 a.m. Friday morning with a report that a guest had been found unresponsive in one of the beachfront hotel’s villas, according to the Royal Bahamas Police Force.

Police found the man lying on a bedroom floor with no sign of trauma. He was pronounced dead by a local doctor, police said.

They both showed signs of having suffered a convulsion, but no trauma, and were pronounced dead, police said.

The couple complained of feeling sick the previous night, and had been treated at a local medical facility before returning to the hotel, according to police, who said they were waiting for autopsy reports to determine the causes of death.

The identity of the victims hasn’t been released.

Dr. Michael Darville, the Bahamas health minister, told a local television station Saturday that he flew to the island with a team of officials to make sure there was no public health emergency at the hotel.

“We thought we might have to make a makeshift facility, a mini hospital,” he said, adding that was not necessary.

“We believe it’s an isolated situation that revolves around four people,” he said.

Darville would not speculate on what might have happened.

Darville, in an earlier account, was quoted as saying that a doctor Thursday recommended the sick visitors be airlifted off of Exuma, but they refused. He said the dead tourists were believed to be in their 60s.

A Bahamas news channel tweeted video of a plane it said was carrying an American woman to Princess Margaret Hospital in Nassau.

Sandals released a statement confirming the deaths and saying the hotel had immediately alerted emergency medical services and authorities of a “health emergency.”

“We are actively working to support both the investigation and the guests’ families in every way possible during this difficult time. Out of respect for the privacy of our guests, we cannot disclose further information at this time,” the statement read.

The resort bills itself as a luxury, adults-only hotel that “is the ultimate romantic getaway.” It offers golf, scuba diving, volleyball and entertainment. A week in a junior villa suite this month is running around $10,000 for two adults, according to the resort’s website.

Space ‘warps astronauts brains’ leaving ‘concerning’ changes even when they’re back on Earth, study reveals... - The US Sun