3 observations after Harden, Sixers grind out Game 4 slugfest to even series – NBC Sports 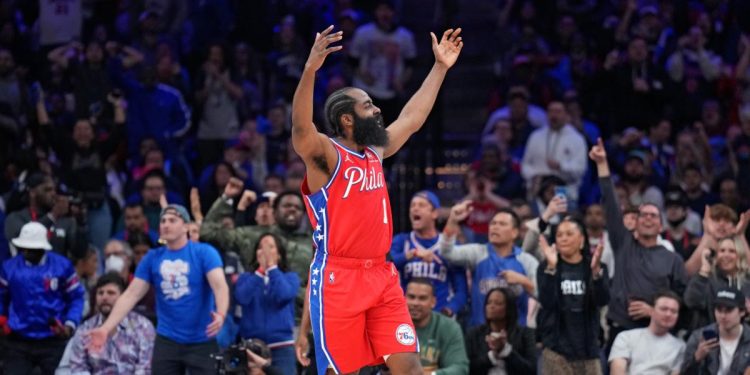 The cliché about playoff series not beginning until a team wins on the road — one James Harden used after the Sixers’ Game 2 loss in Miami — sounds dubious at the moment.

The Sixers won their second consecutive contest in Philadelphia on Sunday night, knotting their second-round series against the Heat at two games apiece with an intense, foul-filled 116-108 win at Wells Fargo Center.

Harden brought them to the finish line with tons of clutch shotmaking. He recorded 31 points, nine assists and seven rebounds.

Jimmy Butler was great with 40 points in a losing effort.

Game 5 will be Tuesday night in Miami. Here are observations on the Sixers’ Game 4 victory:

Embiid back in business offensively

The Sixers were determined early on to get Embiid deep catches against smaller defenders.

That meant searching for the right angles to capitalize on Miami’s switching and fronting, as well as manipulating the Heat so help defenders were momentarily out of the picture. Harden pulled it off on two pretty high-low passes, and Tobias Harris also fed Embiid for an easy first-quarter bucket.

Threading the needle isn’t automatic, though. Harden committed three turnovers in the first period, including one when he couldn’t perfectly loft the ball into Embiid at the rim. And he struck the rim itself on a similar attempt in the second quarter. It’s tempting to force-feed Embiid, but the Sixers will sometimes have better options. Miami tried to make those challenging to explore at times by picking up Harden full court.

Embiid was very wide left on his first three-point attempt, but he banked in his second. He drew the third foul on Gabe Vincent with 8.4 seconds left in the first quarter when the Heat guard scrapped with Embiid for position at the top of Miami’s zone. Embiid’s two free throws gave him 15 points (on 5-for-6 shooting) in the opening quarter — just three fewer than he scored Friday in his Game 3 return to action — and put the Sixers up 30-28.

Wearing a mask to protect his right orbital fracture and playing on a torn ligament in his right thumb, Embiid of course won’t be his best physically anytime soon. The start of Game 4 was at least an encouraging indication that he can still dominate games on both ends.

Even before Harden was called for his second foul on a charge with 3:05 to go in the first, Shake Milton remained in Sixers head coach Doc Rivers’ flexible rotation. Furkan Korkmaz didn’t play Sunday. The idea of Korkmaz minutes is certainly less appealing when the Sixers’ outside shooting is sweet and Milton shows he’s a capable two-way player.

The Sixers made a couple of key threes with Harden sitting. Matisse Thybulle hit his first triple since Game 2 of the first round. Tyrese Maxey drained one against the Miami zone, too. Bam Adebayo and the Heat’s offense in general were unsurprisingly more potent with Embiid on the bench. The Sixers trailed by three points when he checked back in, and that didn’t seem like a bad result at all for Paul Reed’s first stint.

Danny Green heard “Dan-ny!” chants at the foul line following a personal 6-0 run. He started 3 for 3 from long range after a 7-for-9 performance in Game 3. It’s been a pleasant regression to the mean for Green, who went just 2 for 14 from three over Games 1 and 2.

Those jumpers were momentum-turners. Harden briefly got into a groove, sinking a step-back three over Butler to extend the Sixers’ lead to 56-46. The Sixers then weathered a mini-Butler flurry to enter halftime up eight despite zero second-quarter points from their star big man.

A Green entanglement with former teammate Kyle Lowry forced the 34-year-old to exit early in the third quarter with four fouls. Niang entered.

Maxey hinted at more second-half magic following a 21-point post-intermission performance in Game 3 as the 21-year-old drew two free throws on a baseline drive and knocked down a three.

Tobias Harris then joined Green with four fouls a little under five minutes into the third. Thybulle replaced him and slammed in a dunk when Embiid found him free along the baseline. Niang also made an important shot, replying to a Butler three that cut the Sixers’ edge to 74-70 with one of his own.

As the numerous notes about fouls above suggest, the game’s physicality escalated in the third quarter and no one on either team appeared pleased with the officiating besides the player shooting free throws. Adebayo, P.J. Tucker and Max Strus all were assessed their fourth fouls in the third. Philadelphia native Markieff Morris played his first postseason minutes as Miami preferred the veteran forward over rookie center Omer Yurtseven.

Sure enough, it took Morris about a minute to foul Embiid. And Embiid later emphatically denied an ambitious Morris fadeaway jumper.

The Sixers evaporated any uneasiness about Embiid’s time on the sidelines to begin the fourth, stringing together stops and benefiting from a second straight rough Heat shooting night (7 for 35 from three-point range). Harden did exactly what the team needed on the other end, assisting a Harris three, making two foul shots, and sinking a triple that extended the Sixers’ advantage to 97-85.

He was nowhere near done making massive shots. The 10-time All-Star converted a three over Adebayo and drove past him for a layup before burying another long-distance jumper that put the Sixers ahead by eight with three minutes left.

Harden let loose an exultant scream after yet another three. That shot gave him 30-plus points for the second time as a Sixer and ensured the series hasn’t yet begun, at least by one definition.

“If I Die Under Mysterious Circumstances…”: Buzz Over Elon Musks Tweet – NDTV

"If I Die Under Mysterious Circumstances...": Buzz Over Elon Musks Tweet - NDTV