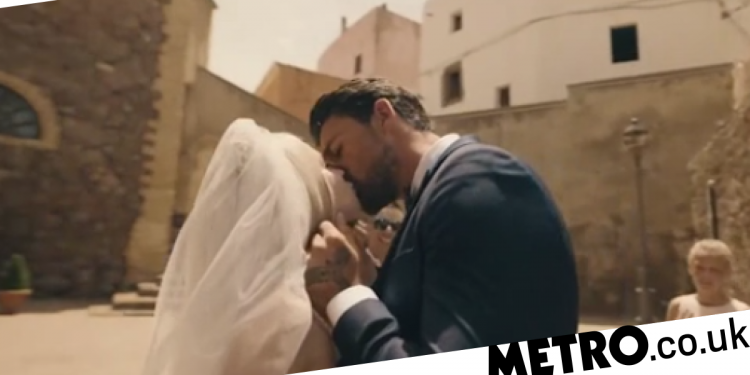 Netflix’s controversial hit 365 Days is back with a sequel…and it looks even more intense this time around.

So soon after Bridgerton season two? We can’t cope.

However, it was incredibly controversial, as it followed the suave Massimo Torricelli (Michele Morrone) with his black suit and slicked-back hair, who kidnaps Laura (played by Polish actress Anna Maria Sieluka), giving her 365 days to fall in love with him.

Not exactly the most wholesome love story.

However, fall in love they did and, in the trailer for the new film, 365 Days: This Day, they starting their lives as a married couple.

However, things quickly get complicated and it seems they’re still not telling each other everything.

The synopsis teases: ‘Laura and Massimo are back and hotter than ever. But the reunited couple’s new beginning is complicated by Massimo’s family ties and a mysterious man who enters Laura’s life to win her heart and trust, at any cost.’

Fans have had…mixed reactions to the trailer, with one writing: ‘The sequel no one asked but still going to be watched by almost everyone.’

‘Oh, this is gonna be terrible. looking forward to it,’ another said, while one more added: ‘I just screamed!!!! I’ve been waiting on the sequel!!!!’

People don’t have long to wait, either, with the movie hitting screens on April 27.

The film certainly wasn’t without its controversy, with some accusing it of ‘glamorising rape’, while more than 70,000 people signed a petition to have it removed from Netflix.

Despite that, Michele previously told Metro.co.uk: ‘Massimo is that kind of manly figure we barely have in this world today, I think women miss that.’

He defended the film, adding: ‘We’re talking about a fictional love story, not everybody is going to like the film, that would be impossible.’

Author Blanka Lipińska went on to promise: ‘The second film will be even better than the first, there will be a lot more sex, we will see a different side to Massimo, and you will see the character of Nacho played by model Simone Susinna.’

365 Days: This Day will be available to stream on Netflix on April 27.

Real Estate 101: Focus Less On Splits And More On Net