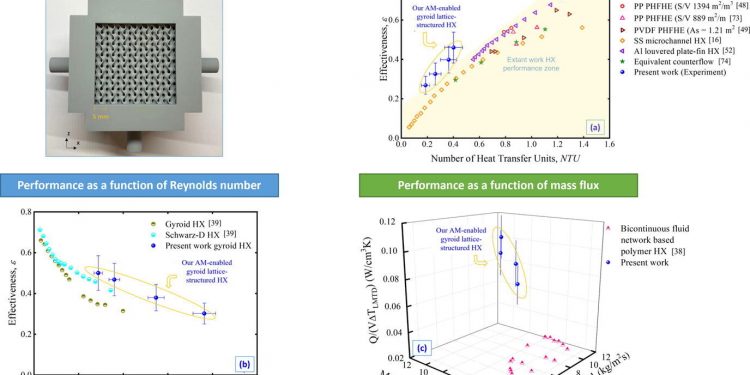 
A new type of lightweight, 3D-printed heat exchanger with a maze-like design is more compact and efficient than its conventional counterparts, its developers say.

A team led by engineers from the University of Glasgow have developed the system, which exploits the unique properties of microscale surfaces to create a high-performance heat exchanger.

In a new paper published in Applied Thermal Engineering, the researchers describe how they developed and built the prototype system, which they estimate to be 50% more effective than a market-leading conventional heat exchanger despite being one-tenth of its size.

The system owes its effectiveness to the design of architected surfaces over which liquids flow through the exchanger. The cube-shaped exchanger draws water through a core studded with tiny holes arranged in a gyroid configuration.

Gyroids are part of a group of cellular designs that are constructed using triply periodic minimal surface geometries having non-self-intersecting and highly symmetrical periodic surfaces.

The team chose to use a repeating gyroid architecture for their heat exchanger because the effectiveness of heat exchange is linked to its surface area—the larger the surface area, the more opportunity the fluids have to pass their thermal energy from one to the other. This means that objects with large surface areas can cool or heat fluids faster than those with more limited surface areas.

Their microscale gyroid design, which they manufactured from a simple photopolymer using a sophisticated 3D printer, engineers a large surface area into a compact cube measuring 32.2mm on each side and weighing just eight grams.

By drawing water through this dense maze, the researchers were able to demonstrate temperature changes of between 10 and 20ºC when water flowed through their heat exchanger at a rate of between 100 and 270 millimeters per minute.

The team measured the heat transfer coefficient of their new exchanger– the measure of its effectiveness in transferring heat between the fluid and its surfaces—so they could determine how it performed against a series of differently-sized conventional heat exchangers made from materials including polymers and metals.

They found that the effectiveness of their new heat exchanger was 50% more than a thermodynamically-equivalent, most-efficient, counter-flow heat exchanger even though their newly-developed prototype was only 10% of its size.

The research was led by Dr. Shanmugam Kumar from the University of Glasgow’s James Watt School of Engineering, alongside colleagues from Swansea University and Khalifa University of Science and Technology in Abu Dhabi.

Dr. Kumar said: “We’ve been working to find new applications for this type of microarchitected, 3D-printed lattice for several years now. We have already demonstrated how they can be used for purposes including recyclable high-performance batteries and the development of future ‘smart’ medical devices like prosthetics and back braces.

“This latest paper shows that we can use these gyroid lattice architectures to create a material with a remarkably large surface area to volume ratio which lends itself very well to heat exchange.

“Being able to develop smaller, lighter, more efficient heat exchangers could help us develop refrigeration systems which require less power, for example, or high-performance engines which can be cooled more effectively. We’re keen to develop this technology further with future research.”

Provided by
University of Glasgow