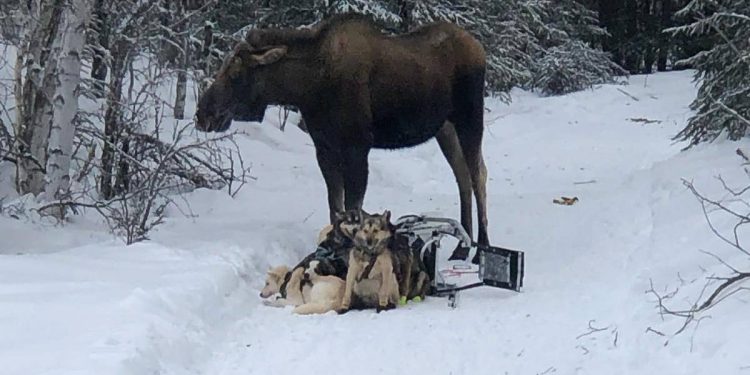 
The world-famous Iditarod Trail Sled Dog Race starts on March 5, and teams spend as much time as they can training for the 1,000-mile race beforehand. Just a few weeks prior to the big event, musher Bridgett Watkins and her dogs were on a 52 mile training run when the sled team crossed the path of the wrong moose.

Watkins described the encounter as “the most horrific past 24 hours of [her] life.” The bull moose charged the pack, trampling the dogs and refusing to let up.

“As he charged me I emptied my gun into him and he never stopped, I ran for my life and prayed I was fast enough to not be killed in that moment. He trampled the team and then turned for us and charged us humans who sought refuge beside our machine.”

Incredibly, Watkins was able to cut 6 of the dogs connected to the machine free. To protect her own life, she had to retreat and couldn’t free the other dogs.

“…he went back to my team attached to my sled and trampled them over and over; repeatedly, for nearly an hour it continued. I have never felt so helpless in my life. He would not leave us alone and he even stood over top of the team refusing to retreat.”

Eventually, after what seemed like ages, a friend living nearby arrived with a rifle. They shot and killed the moose with the larger gun.

Four of the dogs suffered severe injuries, and they were immediately taken to North Pole Vet for treatment. Flash had been stomped in the head, Bronze suffered internal organ damage, Bill had a broken rear leg, and Jefe sustained deep wounds.

“We have many bumps, bruises, cuts, puncture wounds, hoof prints and broken hearts. We are mending together and will see where this leads us in the next few days. Please pray for us all as we continue down this road.”

Everyone involved is lucky to be alive. According to the Alaska Department of Fish and Game, more people in Alaska are injured by moose every year than by bears.

According to updates from Watkins’ Kennel Facebook page, the four injured dogs are currently recovering well. Flash still has a long recovery ahead, but Bill, Bronze, and Jefe already seem eager to get back to running.

“We truly believe there were [angels] among us and God’s hand of protection spared ALL of our lives.”

Watkins told The Associated Press the other 12 dogs will continue their regular training routine.

“This isn’t what I was planning for, but these dogs and myself have trained for so long and so hard for this race … when I walk back out to my dog yard and I have 12 perfectly healthy dogs out of the 16 and they look at me and all they want to do is run, how can I tell them no? That would be selfish of me.”

What this team endured will never leave them, but they’re also professionals and prepared to keep going.

“These are freaking amazing athletes that just survived probably the most traumatic experience of any dog team ever in history, and they’re survivors and they’re still pushing through,” Watkins said.

The Moose’s Death As An Unfortunate Consequence

Watkins’ parents were mushers, and she’s lived in Alaska since she was five years old. Mushers can train and prepare for any situation, but the circumstances are different when it actually happens to you.

On the day of the attack, she had her .380 caliber gun with her, which wasn’t enough to stop the bull moose. Still, Watkins said, no musher would ever travel with a rifle or larger caliber gun that might go off with the jostling of the sled. Most mushers prefer to scare off animals with a flare gun.

“It’s not that I wasn’t prepared. I wasn’t prepared to kill a moose, that’s correct. It’s not my intention to go around in February and hunt and kill an animal. This is like worst-case scenario defending my life.”

Watkins told AP that some reacted negatively to the moose’s death, but it’s easy to say that from behind a computer screen.

“People have a lot of negative comments about what I should or should not have been doing but they’re not the people on the back of that sled.”

According to CBS News, the moose’s meat was later donated to charity. Follow Watkins’ team’s Facebook page for updates on how the dogs are healing.

7 Features To Look For In An Employee Training Software Demo

Best Dog Insurance in Iowa for 2022

The cave was dark and...

Choosing your dog’s name is...

7 Features To Look For In An Employee Training Software Demo