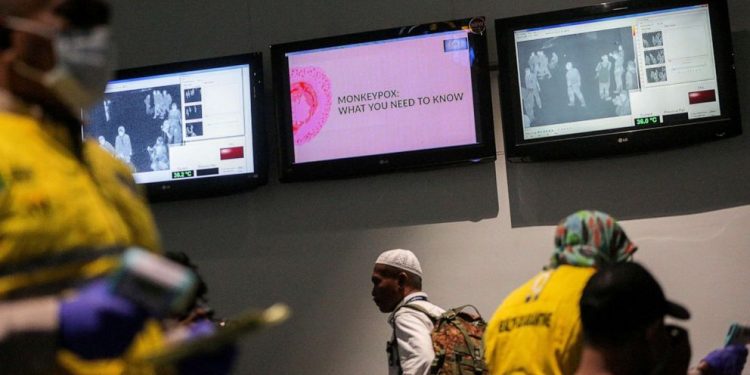 Several people in England have tested positive for monkeypox, according to the U.K. Health Security Agency.

Officials announced Monday four more cases of the rare disease have been detected, bringing the total to seven.

The most recent infections do not seem to be connected to the first case confirmed May 7 in a person who had recently traveled to Nigeria.

But the most recent four cases had not traveled to a region where monkeypox is endemic, raising the possibility that the virus could be circulating within the U.K.

Additionally, the most recent people to test positive self-identified as gay, bisexual or men who have sex with men, leading health authorities to advise people in those groups to watch out for rashes or lesions.

“This is rare and unusual,” Dr. Susan Hopkins, chief medical adviser for UKHSA, said in a statement. “UKHSA is rapidly investigating the source of these infections because the evidence suggests that there may be transmission of the monkeypox virus in the community, spread by close contact.”

Monkeypox is a rare disease caused by the monkeypox virus.

It was first identified in 1958 when two outbreaks of a pox-like disease occurred in crab-eating macaque monkeys that were being used for research, according to the Centers for Disease Control and Prevention.

The first case among humans was recorded in the Democratic Republic of the Congo in 1970, and the illness has since spread to several other nations, mostly in central and western Africa.

How monkeypox is transmitted

Monkeypox can transmit from animals to humans when an infected animal — such as a rodent or a primate — bites or scratches a person.

The CDC said humans can also be infected when hunting wild animals or preparing bush meat for consumption.

The disease can also spread from person-to-person via large respiratory droplets in the air, but they cannot travel more than a few feet so two people would need to have prolonged close contact.

The incubation period for monkeypox is between seven and 14 days, and symptoms are generally mild, according to the CDC.

The most common symptoms include fever, headache, fatigue and muscle aches.

In more severe cases, patients can develop a rash and lesions that often begin on the face before spreading to the rest of the body.

Most people recover within two to four weeks. Although there have been no cases of death reported in the U.S., monkeypox has led to death in as many as 1 in 10 people in Africa who contract the disease.

Monkeypox detection in the U.S.

Very few cases of monkeypox have been identified among Americans.

According to the CDC, the disease does not naturally occur in the U.S. and infections are usually identified among people who recently traveled to countries where monkeypox is more commonly found.

In 2003, 47 confirmed and probable cases were reported among six U.S. states, the first human cases reported outside of Africa.

All the infections occurred after coming into contact with pet prairie dogs, which in turn became infected “after being housed near imported small mammals from Ghana,” the CDC stated.

Since then, just two other cases have been detected in the U.S., both associated with travel.

Treatment and prevention of monkeypox

Currently, there are no specific treatments available for monkeypox. Antivirals typically used for smallpox have been shown to be effective in lab studies and in animal trials.

One vaccine has been approved by the U.S. Food and Drug Administration for use in those aged 18 and older at high risk for monkeypox or smallpox.