$50 billion of student debt could be wiped away in bankruptcy, report says 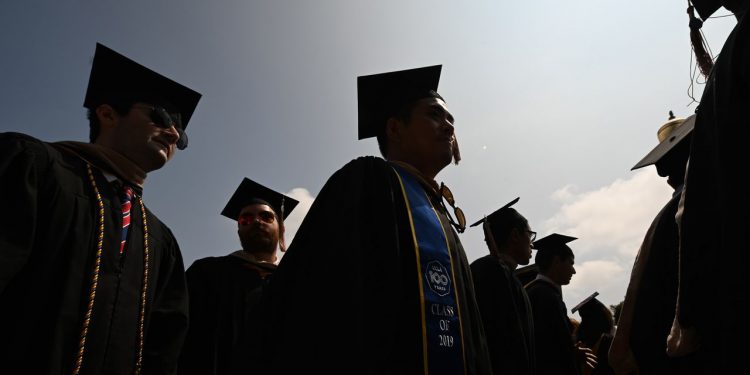 Hello and welcome back to MarketWatch’s Extra Credit column, a look at the news through the lens of debt.

One oft-derided, pernicious aspect of student loans is that unlike credit card debt or an auto loan, they can follow a borrower forever because they’re impossible to discharge in bankruptcy — at least according to conventional wisdom.

This week, we’re taking a look at evidence that suggests that’s not always the case. A new report indicates that as much as $50 billion in debt, colloquially referred to as private student loans and held by 2.6 million borrowers, could actually be wiped away in bankruptcy court. The findings come from an analysis published Thursday by the Student Borrower Protection Center, an advocacy group.

Over the past several years, attorneys, legal scholars and even bankruptcy judges have started to think more creatively about whether debt borrowers took on in the course of their education is eligible for discharge in bankruptcy. One attorney in particular, Austin Smith, has made a career of challenging the notion that all student debt stays with a borrower following a personal bankruptcy filing. So far, three courts of appeals have sided with Smith, indicating his clients’ debts may be eligible for discharge in bankruptcy.

“There are in fact this huge number of borrowers who are being denied their right to bankruptcy because the student loan industry is talking out of both sides of its mouth,” said Mike Pierce, SBPC’s executive director.

The analysis comes out of this growing body of legal research and court rulings. Though federal bankruptcy court theoretically offers a clean slate from financial obligations, Congress exempted federal student loans from discharge through bankruptcy decades ago and private student loans in 2005. For years,borrowers and their attorneys who tried to get the debt wiped away typically argued it was imposing an undue hardship on the borrower — a carve out in the law that made the debt dischargeable, but was a notoriously hard standard for borrowers to meet.

Smith took a different approach, instead asserting that his clients’ debts weren’t student loans as defined by the bankruptcy statute. In order for a student loan to be nondischargeable in bankruptcy court, it needs to fit into at least one of four categories: A loan from the government, a loan from a nonprofit organization, any other type of loan for qualified educational expenses — basically a private loan for up to the cost of attendance at an accredited school — or an obligation to receive funds as an educational benefit, stipend or scholarship.

In his cases, Smith argued that his clients’ loans didn’t fit into these categories. In some cases, that was because they weren’t certified by the school to be below its cost of attendance and went directly into a borrower’s bank account. In others, it was because they were used to pay for a non-accredited program, like a coding bootcamp, culinary course or other career training program at a non-degree granting school.

Navient
NAVI,
,
a large student loan processor, was a target of many of Smith’s suits. In some cases, Navient pushed back, arguing that the loans did provide an educational benefit and therefore should not be eligible for bankruptcy discharge. But the courts of appeals for the second, fifth and tenth circuits ruled that the educational benefit category doesn’t include private student loans. The cases are ongoing.

“The case law is definitely getting much better on this issue about what is a loan that is entitled this special status of non-dischargeability,” said John Rao, an attorney at the National Consumer Law Center, who reviewed the report for SBPC ahead of publication. “We now have three circuits that have clearly said and adopted this view that you have to fit within the specific parameters of the legislation in order to get that special protection.The big question for me is how many of these loans really are out there. This report sheds some light on that.”

Estimate provides a window, but the authors would like to see more transparency around this data

To come up with the $50 billion figure, SBPC looked at a variety of sources including government reports, company disclosures to investors and enrollment data to estimate what percentage of private student loans made between 2000 and 2014 are ineligible for discharge.

They specifically tried to gauge what share of private loans were made for ineligible expenses — so those outside the cost of attendance at a school  — and the percentage of private loans made for students to attend non-accredited schools. In addition, in order for a debt to be a qualified education loan and therefore non-dischargeable in bankruptcy court, it needs to go to an eligible student, the report notes.

Scott Buchanan, the executive director of the Student Loan Servicing Alliance, a trade group representing student loan companies, questioned the estimate given that many of the types of loans at issue in the report haven’t been regularly offered to borrowers for several years, since credit markets tightened in the wake of the Great Recession.

Pierce, the SPBC executive director, said he feels good about the organization’s estimates or else the group wouldn’t have published it. Still, “we shouldn’t have to guess at this,” he said. Instead, he said regulators and the companies themselves should be taking steps to make this information more transparent.

The report suggests some of the companies that offered these loans agree they could be subject to discharge. The authors highlight communications made to investors by Sallie Mae and Navient — which was spun off from Sallie Mae in 2014 — indicating that the loans they made directly to borrowers as well as career training loans carried a risk of discharge in bankruptcy. Despite this warning to investors, Navient continued to collect on these loans even after borrowers filed for bankruptcy.

Paul Hartwick, a Navient spokesman, wrote in an email that the company “continues to support bankruptcy reform so that federal and private education loans would be dischargeable after a good faith period of repayment.”

If it’s true, as the report suggests, that lenders were telling investors these loans could be discharged while trying to convince consumers they weren’t eligible, “it’s really offensive,” Rao said.

“It really is something the [Consumer Financial Protection Bureau] and state attorneys general should be looking at,” Rao said. “Was this an attempt to deceive consumers into believing they really had no rights?”

Buchanan, of the Student Loan Servicing Alliance, countered that the messages that investors and consumers are getting are both true. “If you told investors that there’s a risk that some of these loans could be discharged in bankruptcy that’s absolutely true,” he said. “But if you told borrowers it’s difficult to get your loans discharged in bankruptcy that’s true. They’re both true statements.”

The report suggests the CFPB and state regulators should step in to assist borrowers impacted by these loans, by using their authority to monitor and sanction companies that engage in deceptive practices in the process of originating and collecting debt.

The consumer agency is appears to be watching the situation closely. “The CFPB is very concerned about any misrepresentations to students about whether education-related loans are dischargeable in bankruptcy,” a spokesperson for the bureau wrote in an emailed statement. “This is particularly worrying where troubling private student loan debt originated during the Great Recession continues to hang over consumers’ heads.”

The spokesperson noted that the agency previously identified communications from companies that misled borrowers about whether their loans could be discharged in bankruptcy and implemented policies spelling out that no communications should describe student loans as never dischargeable in bankruptcy. CFPB officials are “deeply concerned that consumers may not receive the full protection promised under bankruptcy law as a result of lenders’ misrepresentations,” the spokesperson wrote.

Rao sees another reason for these regulators to step in. According to the bankruptcy code, creditors who collect on debt after it’s been discharged can be sanctioned by the court for contempt. But a 2019 Supreme Court ruling offered an opening for creditors to argue against holding them in contempt if there is some doubt about whether the debt is eligible for discharge in bankruptcy.

“That might be at issue in some of these cases,” Rao said. In those cases, it could be difficult for individuals to litigate to get a sanction or even recover money they’ve already paid after a debt was discharged, Rao said. “That’s where government enforcement action could really be helpful.”

It may already be getting more difficult for companies to claim there’s uncertainty surrounding the dischargeability of these loans, Rao said. “The more they lose in court on this, it’s much harder for them to argue that they had some fair reason for doubt for continuing to collect.”

Though the debt at issue in the report is a small fraction of the total $1.7 trillion in outstanding student loans, addressing the issues borrowers with these loans face is important, Kaufman said, because fundamentally, borrowers have certain rights in bankruptcy court and the evidence indicates “they aren’t able to access them because some companies don’t want them to.”

What’s more, even if policymakers pursue broad-based student debt cancellation, it’s unlikely private student loan debt would be included. “What you’re left with is the bankruptcy system for borrowers that are the most economically vulnerable,” Pierce said, and so making it work is “really important.”

Federal student debt, the bulk of that $1.7 trillion, is still only dischargeable in situations where borrowers face an undue hardship. But in recent years, some bankruptcy judges have started to consider a broader definition of undue hardship than what most courts have used for decades. Still, because so few borrowers attempt to litigate in this situation — it may be costly and the prevailing wisdom that student debt isn’t dischargeable in bankruptcy can be a deterrent — major changes in this area are more likely to come outside of the court system.

“If there’s going to be any change at all that’s noteworthy, it will be on whether the Department of Education itself is more willing to consider settling these cases,” Rao said. Guidance from the agency could influence later court decisions, he added.

Advocates have argued the Department should stop contesting when borrowers attempt to discharge their debt because of an undue hardship or at least create some kind of decision criteria on when it makes sense to collect.

Last year, the agency said it was reviewing its policies related to undue hardship discharges of student loans in bankruptcy.

‘Batman’ will have an excruciatingly long runtime

'Batman' will have an excruciatingly long runtime