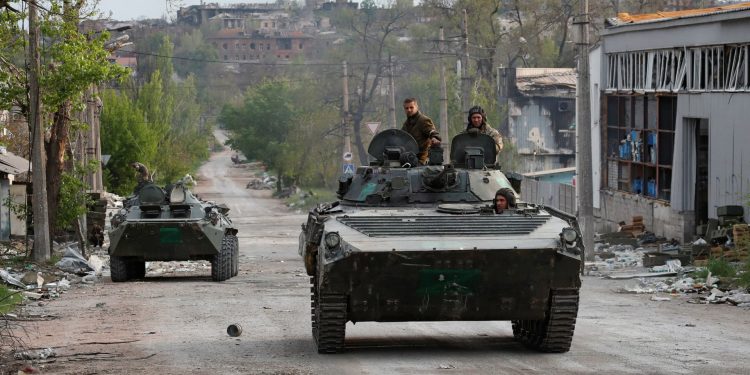 A customer holds a fuel nozzle at a gas station in San Francisco, California, U.S., on Wednesday, April 27, 2022. California is set for an automatic increase in its fuel tax July 1 after Governors Gavin Newsom failed to convince lawmakers to pause the hike, part of his plan to bring relief to residents in the state with the most expensive gasoline.

U.S. gas prices marched higher Sunday, as Russia’s war on Ukraine wreaks havoc on global energy markets. Sanctioning of Russian energy products and the European Union’s proposed plan to move away from dependence on the nation’s energy has sent oil and natural gas prices soaring. This, in turn, has boosted the price U.S. consumers are paying at the pump.

Retail diesel prices in the U.S. hit a record $5.53 Sunday, according to AAA. Prices are $2.43 above where they were last year.

The national average for a regular gallon of gasoline stood at $4.317 on Sunday, just shy of March’s record $4.33.

Bono (Paul David Hewson), Irish singer-songwriter, activist, and the lead vocalist of the rock band U2, Antytila (C), a Ukrainian musical band leader and now the serviceman in the Ukrainian Army Taras Topolia, and guitarist David Howell Evans aka ‘The Edge’ perform at subway station which is bomb shelter, in the center of Ukrainian capital of Kyiv on May 8, 2022.

U2’s Bono and the Edge performed in a Kyiv metro station after being invited by Ukrainian President Volodymyr Zelenskyy, the band said on Twitter.

The effort was “a show of solidarity with the Ukrainian people,” U2 said.

Ukrainian troops retreated from the eastern Ukrainian city of Popasna, the governor of Luhansk region said, confirming previous reports that it had been taken.

The head of Russia’s republic of Chechnya, Ramzan Kadyrov, had said on Sunday his troops had taken control of most of Popasna.

Luhansk Governor Serhiy Gaidai told Ukraine television that Ukrainian troops had retreated to take up more fortified positions, adding: “Everything was destroyed there.”

Russian forces launched a new offensive push in April along most of Ukraine’s eastern flank, with some of the most intense attacks and shelling taking place recently around Popasna in the Luhansk region.

Serhiy Haidai, the governor of the Luhansk region, said Sunday that at least two people had died after the bombing of a school.

Haidai said, according to a Reuters translation, that the bombing occurred Saturday afternoon where 90 people had been sheltering. He said 30 had been rescued with around 60 still likely to be under the debris and feared dead.

Luhansk is one of the two regions that make up the Donbas — in the east of Ukraine — where Russian troops are now concentrating their efforts.

The Associated Press added that the school was located in the village of Bilogorivka. Rescue work is ongoing.

NBC News was not able to independently verify the reports.

“The fire was extinguished after nearly four hours, then the rubble was cleared, and, unfortunately, the bodies of two people were found,” Haidai wrote on the Telegram messaging app, according to Sky News.

In a new intelligence update Sunday, the U.K.’s Defence Ministry has reported how senior Russian commanders have been drawn onto the battlefield due to what it describes as a “faltering Russian performance on the front line.”

“The forward deployment of commanders has exposed them to significant risk, leading to disproportionately high losses of Russian officers in this conflict. This has resulted in a force that is slow to respond to setbacks and unable to alter its approach on the battlefield,” it said in a series of tweets.

Museum workers carry the sculpture of Ukrainian philosopher Hryhorri Skovoroda from the destroyed building of the Hryhoriy Skovoroda National Literary Memorial Museum in the village of Skovorodynivka, in Kharkiv Region, on May 7, 2022, on the 73rd day of the Russian invasion of Ukraine.

Ukrainian President Volodymyr Zelenskyy said that everyday of this war, Russian forces does something that is “beyond words,” following a strike against a museum in Ukraine.

“Targeted missile strikes at museums — this is not even every terrorist can think of,” Zelenskyy added.

The museum that was destroyed is dedicated to the 18th century philosopher and poet Hryhoriy Skovoroda.

But this is the kind of army that is fighting Ukraine, and “this is what they want to bring to other European countries,” he said.

As of May 7, the Russian army has destroyed or damaged nearly 200 cultural heritage sites, according to Zelenskyy.

UK to provide about $1.6 billion of further military support to Ukraine

Britain said it would provide a further 1.3 billion pounds (US$1.6 billion) in military support and aid to Ukraine, making the pledge ahead of a planned video call on Sunday by Group of Seven leaders with Ukrainian President Volodymyr Zelenskyy.

Prime MinisteBoris Johnson has been one of the strongest supporters of Ukraine’s efforts to resist Russian forces since Russian President Vladimir Putin launched the invasion on Feb. 24. Johnson’s government has sent anti-tank missiles, air defense systems and other weapons to Ukraine.

The new pledge almost doubles Britain’s previous spending commitments on Ukraine and the government said this is the highest rate of spending on a conflict since the wars in Iraq and Afghanistan, although it did not give details of this calculation.

“Putin’s brutal attack is not only causing untold devastation in Ukraine — it is also threatening peace and security across Europe,” Johnson said in a statement. Last week he became the first Western leader to address Ukraine’s parliament since the start of the invasion.

The leaders of the G-7 countries — Britain, Canada, France, Germany, Italy, Japan and the United States — will hold their virtual meeting with Zelenskiy on Sunday, the day before Russia marks its Victory Day holiday, which marks the end of World War II in Europe.

Britain said the extra spending on Ukraine will come from a reserve used by the government for emergencies.

Smoke rises from the Metallurgical Combine Azovstal in Mariupol, in territory under the government of the Donetsk People’s Republic, eastern in Mariupol, Ukraine, Thursday, May 5, 2022.

More than 300 civilians have been evacuated from the Azovstal steel plant in Mariupol, according to Ukrainian President Volodymyr Zelenskyy.

“I am grateful to the teams of the International Committee of the Red Cross and the United Nations Organization, who helped us organize the first phase of the evacuation missions from Azovstal,” Zelenskyy said in a video posted to Telegram.

Civilians and soldiers have been barricaded at the massive steel plant since mid-April.

Zelenskyy says preparations are underway for the second phase of the evacuation mission, which includes rescuing the wounded and the doctors.