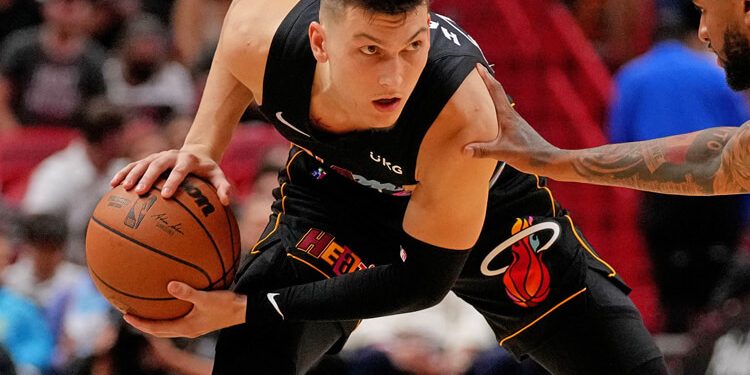 It took about 24 minutes, but the Miami Heat eventually found the Philadelphia 76ers’ soft spot and repeatedly poked it in the second half of their Game 1 win, flipping a 51-50 halftime hole into a 106-92 victory Monday.

The absence of Philadelphia center Joel Embiid was apparent in the closing two quarters of that contest and the Sixers may not have a solution for their missing MVP in time to avoid a 0-2 series deficit. Books have Philadelphia pegged as an 8-point underdog for Game 2 in South Beach tonight.

Here are our free NBA picks and predictions for 76ers at Heat on May 4.

This odds widget represents the best odds available for each betting market from regulated sportsbooks.

Miami opened as a 9-point home favorite and early action has slimmed that spread to -8 as of Wednesday morning. The total hit the board at 206 points and has peaked at 208 with play on the Over moving that number.

Use the live odds widget above to track any future line movements right until tip-off and be sure to check out the full NBA odds before betting to ensure you get the best number.

If you’re signing up for a new sportsbook for the NBA Playoffs, here are two of the best bonuses* available:

The Over is 7-2 in 76ers’ last nine games following a loss. Find more NBA betting trends for 76ers vs. Heat.

76ers vs Heat picks and predictions

Our side and total predictions are based upon our analysis of the line and total in this game. Our best bet is our favorite pick across all markets.

Embiid’s offensive prowess is obviously something Philadelphia misses, but his defensive absence was an issue the Sixers constantly struggled to overcome in Game 1.

A smaller lineup was bullied inside, leading head coach Doc Rivers to swap in a zone defense, which then, in turn, allowed the Heat to crash the offensive glass with ease and rack up 15 offensive rebounds for 18 second-chance points.

The Heat didn’t shoot all that well overall, making only 43% of their field goal attempts, but they were able to rebound 39% of those missed shots, which are back-breaking possessions for a Philly team fighting to keep up.

DeAndre Jordan was at the root of those interior troubles as the veteran center’s lack of mobility was exploited, with Miami going after him and attacking the rim. Jordan finished with a plus/minus rating of -22 in just 17 minutes of play but despite that listless effort, Rivers told the media he plans to start Jordan again in Game 2.

Miami won’t be as kind to the Sixers on Wednesday. The Heat had enjoyed an extended break between putting the Atlanta Hawks away in five games in Round 1 on April 26 and taking the court for the second-round series opener on May 2.

There was a little rust in the opening 24 minutes, with the Heat committing 10 of their total 11 turnovers in the first half along with an offensive rating of just 102.0 before that metric spiked to 127.3 in the second half.

If Rivers is serious about not shaking up his lineup and adjusting to what happened in Game 1 (and he could be, as Doc is known to do some dumb shit), tonight’s contest could be over and done with in the opening quarter. The Heat have cleared the cobwebs and will be going for the throat at home.

The 76ers’ defense was a disaster in Game 1 and fixing that isn’t an easy task. As for the Philly offense, it was inconsistent but created solid scoring opportunities on many possessions. The Sixers just whiffed on open looks. Philadelphia finished shooting 43% from the field but couldn’t buy a bucket from beyond the arc, going 6 for 34 from deep.

Miami was mindful of dangerous one-on-one situations, padding the paint anytime James Harden or Tyrese Maxey would draw isolation. That left the 76ers’ wing players parked with open space on the perimeter but Danny Green, Georges Niang, and Tobias Harris shot a collective 2 for 16 from 3-point range.

Given that lack of success, I don’t expect Miami head coach Erik Spoelstra to change his game plan on defense and those opportunities will still be there for Philadelphia’s spot-up shooters. The 76ers are a much better shooting team than the one that showed up in South Beach on Monday, ranked fifth in 3-point percentage (36.5%) and averaging almost 12 triples an outing.

As for the Heat, if they pick up where they left off in the second half of Game 1, then Miami will be able to dissect the Sixers. The Heat were almost as cold as their opponent from distance in Game 1, finishing 9 for 36 on 3-point attempts, but are also a better shooting team on average.

Miami posted more than 13 triples on 34% shooting per game versus the Hawks in Round 1 and if the 76ers go zone and pack the paint, the Heat will make them pay for that extra space on the outside. Once Philly flip-flops and goes small with man-to-man, look for Miami to attack the interior and score efficiency at the rim.

The Game 2 total opened as low as 206 points – more than four points below the closing number of 210.5 for Game 1. That really feels like a knee-jerk reaction to a poor shooting performance by two teams capable of much more.

With the Heat working the rust off from that break between series and the Sixers’ shooters shaking out the Game 1 jitters, the scoreboard operators at FTX Arena will get more of a workout tonight.

When it wasn’t building a brick house from beyond the arc, Philadelphia was making 62% of its 2-point looks in Game 1. Miami was also solid from inside, scoring on over 55% of its 2-point attempts and finishing the contest with an offensive rating of 114.0 despite a dismal day from distance.

Hell, even if the Sixers and Heat made just 30% of their shots from beyond the arc in Game 1, it would have produced an additional 18 points – lifting the 106-92 finish well above the closing total of 210.5 points.

Unders have been red hot during the NBA postseason, cashing in at a crazy 67% clip, but this adjustment in the total between Game 1 and Game 2 seems too severe.

Did you know that if you parlayed today’s NBA 76ers vs. Heat predictions and picks in a single-game parlay, you could win $26.45 on a $10 bet?

Use our NBA parlay calculator to create your own parlays and see their potential payouts.