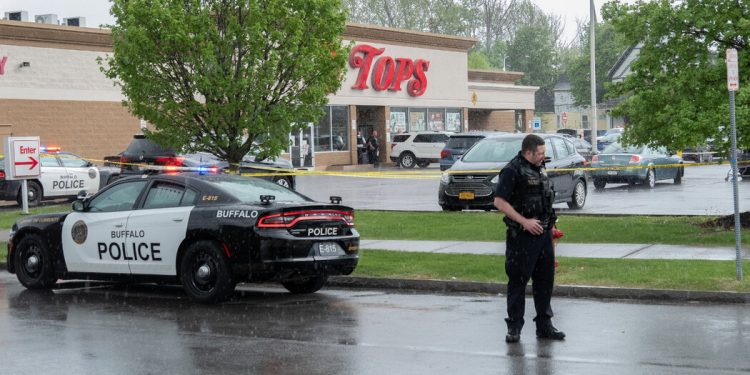 The man charged in the killings, Payton Gendron, 18, has been accused of traveling 200 miles from his home in Conklin, N.Y., specifically to kill Black people, fueled by a racist belief in so-called replacement theory.

On Saturday, the authorities say, he opened fire outside the supermarket, then went inside and continued to shoot shoppers and workers before surrendering to the police. He has pleaded not guilty to first-degree murder and appeared in court on Thursday.

Ms. Rogers told The Buffalo News that she had called 911 while hiding from the gunman, whispering on the phone in hopes of eluding his notice. The dispatcher, she said, had admonished her.

“She was yelling at me, saying, ‘Why are you whispering? You don’t have to whisper,’” Ms. Rogers told The News, “and I was telling her, ‘Ma’am, he’s still in the store. He’s shooting. I’m scared for my life. I don’t want him to hear me. Can you please send help?’ She got mad at me, hung up in my face.”

Ms. Rogers, 33, told The News she then called her boyfriend and told him to call 911.

She offered a similar description of events in a separate interview with The New York Times, saying she had been standing behind the store’s customer service counter when she first heard gunfire.

After ducking down, she said, she pulled out her cellphone, called 911 and whispered to the dispatcher that someone was shooting in the store. The dispatcher had asked why she was whispering, and then the connection broke, Ms. Rogers said in the interview.

Mr. Anderson, the spokesman for the Erie County executive, Mark Poloncarz, said the inquiry had involved a review of the call and that it was unclear who had hung up on whom. He also said the dispatcher’s action had not affected the dispatching of the call.

At a news conference on Sunday, Buffalo’s police commissioner, Joseph A. Gramaglia, said the first 911 call had come in at 2:30 p.m. and that officers had arrived at the store at 2:31.

Madison Ruffo, a spokeswoman for CSEA Region 6, the public employees’ union that represents the dispatcher, said its policy was not to comment on disciplinary matters or active investigations involving its members.