A 25% subsidy on fruit and veg would save the nations waistline, study finds 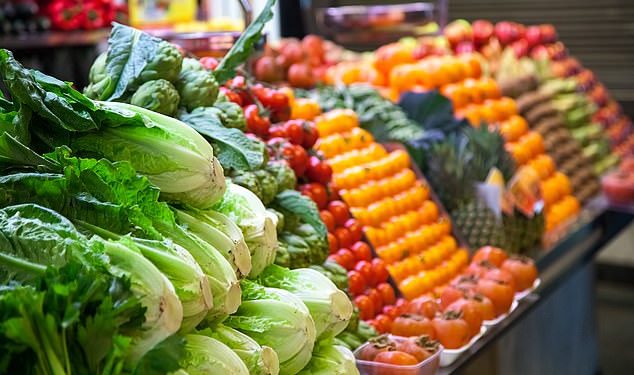 
Forget a fat tax — the best way to save the nation’s waistline is to subsidise fruit and veg, according to a study.

Not only could it shave a few pennies off the weekly shopping list, researchers say the policy could also ‘constitute a huge gain for public health’.

Economists at Warwick University estimate a 25 per cent subsidy on fresh fruit and vegetables would cause a 15 per cent rise in their sales.

The short expiry time of fresh produce means fruit and veg typically have higher fixed costs than ready-meals and junk food which have longer shelf lives.

The researchers estimate UK supermarkets sold around £10.4billion of fresh produce in 2017, meaning the subsidy would cost the taxpayer around £2.5bn a year.

For comparison, the NHS currently spends about £6bn a year on obesity-related illnesses, which is expected to rise to £9.7bn by 2050.

It comes amid a Government crackdown on obesity spurred on by Boris Johnson’s near-fatal bout of Covid in 2020, which he blamed on being too fat.

But many of the policies being considered — including stricter advertising rules and taxes on junk food — have been slammed as ‘nannying’ by critics.

Professor Van Rens, an economist at Warwick, said: ‘A subsidy is in some ways the most market-based, least invasive intervention you can think of. 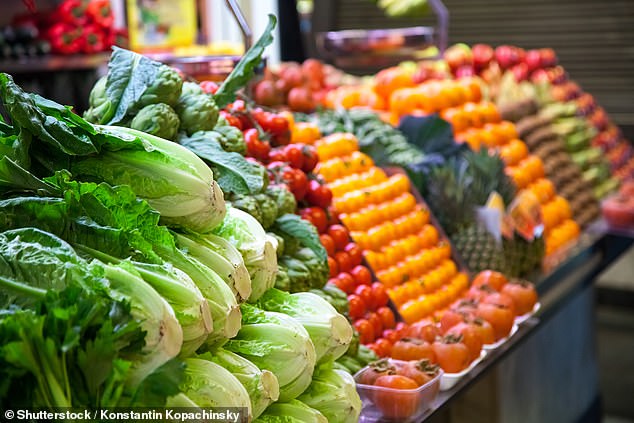 Not only could it shave a few pennies off the weekly shopping list, researchers say a 25% subsidy on fruit and veg could also ‘constitute a huge gain for public health’

‘Anything less than that is just giving friendly advice and will not get us where we need to be.’

From next month mandatory calorie labelling will be introduced in many restaurants, cafes and takeaways in England.

And from October ‘multibuy’ junk food offers will be banned, including ‘buy one get one free’ deals.

A new watershed policy restricting the advertising of food and drink high in salt, fat and sugar before 9pm will also be introduced by 2023.

But the team at Warwick have questioned how effective the policies will be.

Oxford University researchers found shops which removed stands promoting chocolate eggs and other seasonal treats from checkouts, end of aisles and special promotion stands, saw only a 5 per cent rise in confectionary sales over Easter.

This compared to an 18 per cent rise in sales when the chocolate was positioned in key locations within the supermarkets.

It led to shoppers purchasing 4,998 fewer kilograms of sweets and chocolates, which the researchers said led to fewer total calories being consumed.

While it may hurt supermarkets’ bottom lines, such health interventions could help rescue the nation’s waistlines, Oxford experts said. About a quarter of British adults and children classified as obese.

Another study by the Oxford academics found stocking low-fat and lower-calories snack alternatives near traditional products encouraged Britons to opt for healthier choices.

Professor Van Rens added: ‘Obesity is a massive public health problem and we’re not going to solve it with tweaks. We need to bring out the big guns.’

The new study, published in the journal Science Advances, found that on average Britons pay 40 per cent above the production costs for fruit and veg.

Fresh foods have particularly high fixed costs as they are perishable products which requires them to be restocked more frequently.

This drives up the price of fresh produce compared to other, unhealthier products which are sold close to their marginal cost.

The economists looked at detailed data on food purchases between 2004 and 2014 from a database in the US of 60,000 households with different levels of income.

They used the data to model how much the high costs of fruit and veg deterred people from buying them often.

The study found people would buy 15 per cent more fruit and veg if they were cheaper.

Only about three in 10 Britons eat the recommended five-a-day – or 400g of fruit or vegetables.

The Warwick team estimate their subsidy could close the gap by as much as a third.

Professor Van Rens said: ‘If there weren’t any fixed costs you would expect food to be sold close to marginal cost. And the fact that they are not affects diets.

‘A higher price of any product means that people buy less of it. The question is, by how much?

‘We find that if the market were working correctly, consumers would buy 15 per cent more fruit and vegetables than they currently do, which would constitute a huge gain for public health.’

Mr Johnson announced a crackdown on obesity in 2020 after being admitted to ICU with Covid, which he attributed to being overweight.

As part of the plan, new laws restricting offers on foods high in fat, sugar and salt are due to come into effect in medium and large shops in October.

Junk food giants will also be banned from advertising online and before 9pm on TV by January 2023.

The Prime Minister has also been recommended by his food tsar Henry Dimbleby to slap processed foods high in sugar and salt with a levy.

More than a quarter of children starting primary school are now overweight or obese, rising to four in 10 for youngsters aged 11 to 12.

And children from the poorest areas are more than twice as likely to be obese than those from the richest areas.

Meanwhile, two-thirds of adults are overweight or obese, costing the health service £6billion a year.

The Government pledged to halve childhood obesity and tackle close inequalities between youngsters from the most and least deprived areas by 2030.

Rules due to come into force in eight months time are set to force shops with more than 50 employees to phase out offers on food high in fat, sugar and salt.

They will also be ordered to stop promoting unhealthy food offers at checkouts, store entrances or at the end of aisles.

Pubs and restaurants are also being hit by the new rules and will no longer be allowed to offer free refills of sugary soft drinks.

Local authorities will have powers to issue fines to businesses failing to comply with the rules.

The Government estimates the regulations will accrue £60million in health benefits over 25 years through increased quality of life and extending lives through a drop in obesity rates.

Putting calories on menus won’t solve obesity, but it will harm those of us with eating disorders | Clare Finney