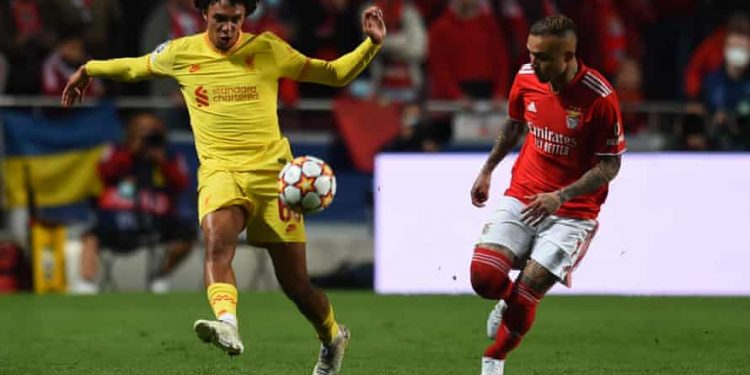 
No manager has beaten Pep Guardiola as often as Jürgen Klopp, although the balance is swinging the Manchester City manager’s way, with one defeat in nine meetings since the Champions League quarter-finals of April 2018. Theirs is one of the great rivalries, a meeting of two coaches who have done more than anybody else to shape the tactical landscape of modern football. But how might they set up on Sunday and where is the game between Liverpool and their Premier League title rivals likely to be won and lost?

Phil Foden was Manchester City’s key attacking presence in the 2-2 draw at Anfield as he found space on the City left again and again. He scored the first and it was his run and half-cleared cross that led to Kevin De Bruyne’s late equaliser. That, though, was against James Milner, who struggled to such an extent that he probably should have been sent off.

At the Etihad it could be different. For one thing, there is no guarantee Foden will play on the left. That he was on the bench against Atlético Madrid suggested one or both of two things. First, that Guardiola envisaged the game playing out pretty much as it did, with Atlético sitting deep and frustrating City: what a strength to have, then, to be able to weary them, dragging them this way and that, before deploying your most creative asset against tired legs with 20 minutes remaining. Sure enough, within 90 seconds Foden had identified and exploited a space to set up De Bruyne for the winner.

And second that he was being kept fresh for Liverpool; they are a better team than Atlético and there is a good argument that Sunday’s game will have a greater bearing on the destination of a trophy than Tuesday’s first leg of a Champions League quarter-final. Foden surely will play against Liverpool – but it may be that he is used as the false 9, the position occupied by Jack Grealish at Anfield.

Trent Alexander-Arnold missed the game against City at Anfield with a calf injury, but he is available on Sunday. Nobody in the Premier League has registered more assists this season than Alexander-Arnold and his remarkable crossing ability was seen again against Benfica on Tuesday as his ball to Luis Díaz laid on the second for Sadio Mané. What was striking was not just the pace and accuracy of the delivery, but that it came from a deep position, several yards in from the flank; there was almost no margin for error. Almost no matter where he is on the field, Alexander-Arnold simply cannot be given time to cross.

How can City stop him? If they can press effectively and dominate possession, that may be enough to restrict Alexander-Arnold’s influence. But at Anfield they had 52% of the ball and while it’s possible, perhaps even likely, that figure will be higher at home, it is hard to see City’s control of the ball being anything like enough that Alexander-Arnold is not a threat.

In both games last season – a 1-1 draw at the Etihad when Liverpool played a surprising 4-4-2 shape with Mané and Diogo Jota as the wide-midfielders-cum-wingers, and a 4-1 win for City at Anfield – Raheem Sterling was used on the City left, less for his diligence than that he could accelerate into any space Alexander-Arnold left behind on his forward sallies.

That space is an inevitable fact of the way Alexander-Arnold plays but can be mitigated by Liverpool’s press that, when working to its maximum, should deny opponents time to measure balls in behind the full-back. When it goes wrong, as away to Real Madrid last season, Alexander-Arnold can look as though he is hopelessly out of position. But the issue is rather that his way of playing, which gives Liverpool such potency, is predicated on a functioning and aggressive press – which is probably the main reason that Alexander-Arnold, for all his ability on the ball, is not Gareth Southgate’s preferred choice for England.

If Guardiola chooses again to engage in what is in effect a game of chicken, Sterling looks the more likely option given he remains probably more defensively reliable than Grealish. If he prefers the more conservative option, Gabriel Jesus could be used effectively to harry Alexander-Arnold while still offering some creative threat.

Struggle on the flanks

A decade ago, Guardiola had revolutionised football with his possession-heavy football, and Klopp had just begun the fightback by devising a press that won the ball back faster and more aggressively than had been seen before. Both have subsequently modified their approach so Thiago Alcântara, a longtime Guardiola favourite, will probably be in the Liverpool midfield, while City are more direct in transition than Guardiola’s Barcelona. But this remains a battle between the two major schools of modern football: those that prioritise retaining possession and those that prioritise regaining it.

One of the consequences of that process is it increasingly feels as though the key battles are those between wide forwards and full-backs. In a competitive field, Mo Salah’s performance against City at Anfield this season was probably his greatest in a Liverpool shirt, featuring an extraordinary assist and a brilliant goal. He has perhaps not been entirely at his best recently, with no goals from open play in his past eight games for Liverpool, but there is no doubt he will start on the right and Klopp had the benefit of being able to take him off after an hour of Tuesday’s win at Benfica.

With Kyle Walker suspended, João Cancelo switched to the right in Lisbon, with Nathan Aké in at left-back, but the Portugal international will surely return to left-back. His two-footedness means he should be less susceptible to Salah cutting infield than many defenders, but that did not particularly help at Anfield. The extent to which Cancelo can get forward to operate as an auxiliary midfielder, which is one of the ways City tend to dominate possession, is likely to be key.

It is a similar story in the other full-back v wide forward battles. Andy Robertson has one assist fewer than Salah this season, while Riyad Mahrez is City’s joint top-scorer in the league. While Walker will not be troubled for pace by either Mané or Díaz, with Rúben Dias out, City could be vulnerable to a rapid forward on the diagonal trying to get John Stones on the turn. The centre is about achieving control, but this is a game when the decisive moments will probably come from the flanks.