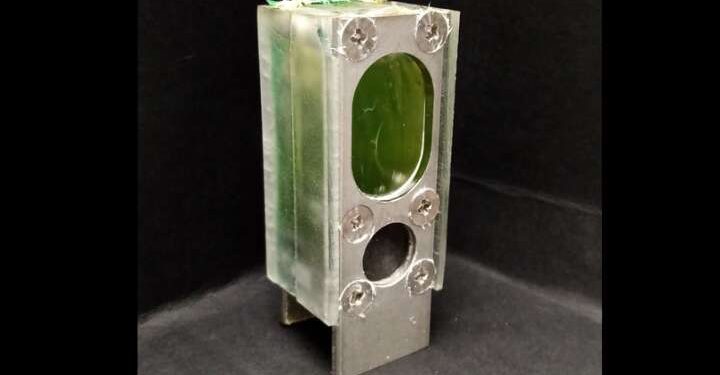 A computer processor at Cambridge University has proven it can run on an incredible new type of battery. In a canister not much bigger than an AA battery, researchers placed blue-green algae in a container with electrodes and the microorganisms were able to use sunlight to create enough electricity to power the computer for six months.

As reported in Energy & Environmental Science, the cyanobacteria allowed the computer to run in cycles of 45; working and then 15 minutes on standby. It wasn’t carrying out complex equations though, it was calculating the sum of consecutive integer numbers (to simulate a computational workload), measuring the current output from the battery, and sending that data to the cloud. Since the experiment ended in August 2021 the battery has continued to produce power.

“We were impressed by how consistently the system worked over a long period of time – we thought it might stop after a few weeks but it just kept going,” said Dr Paolo Bombelli of the University of Cambridge’s Department of Biochemistry said in a statement.

The system, which ran for six months without interruption of power, consumed 0.3 microwatts of power during computing time, and 0.24 during idle time.

It’s not clear how it does it, though. The team thinks the most likely explanation is that the cyanobacteria (the blue-green alga) release electrons during the photosynthesis process. But the power wasn’t affected by lack of light. The power was steady both during the day and at night. This may be because the algae process some of its food when there’s no light, and so continues to generate an electrical current.

These algae-powered batteries might not be enough to power a house yet – scalability is being investigated – but can certainly power small devices, especially in remote locations. Since they are made with inexpensive and recycled materials, they are affordable and could be paired with small electronics in various appliances and sensors.

It could be a game-changer for the so-called “Internet of Things”, the idea that one day physical objects (the “things”) fitted with sensors, software, and other technology will be able to connect with every sort of device over the Internet. One of the current limitations of that is the availability of lithium; there’s not enough being produced. But the existence of such a bio-battery could be a game-changer in bringing that forth.

“The growing Internet of Things needs an increasing amount of power, and we think this will have to come from systems that can generate energy, rather than simply store it like batteries,” said Professor Christopher Howe, joint senior author of the paper. “Our photosynthetic device doesn’t run down the way a battery does because it’s continually using light as the energy source.”