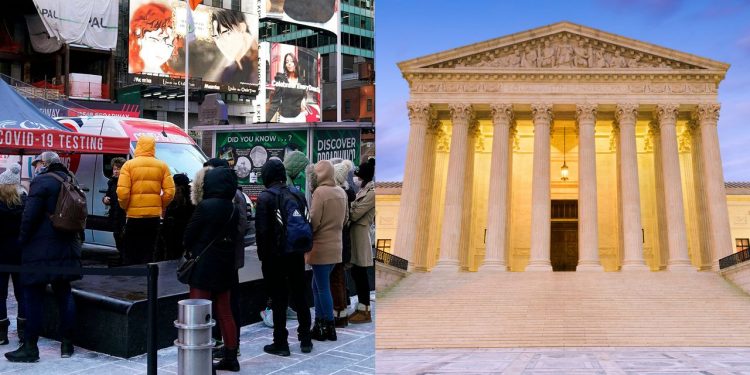 The U.S. Supreme Court on Friday will consider whether to halt a federal rule that would require businesses to ensure their employees are vaccinated against COVID-19 or get tested every week if they remain unvaccinated.

The case comes to the court during the omicron variant surge, when the wait for COVID-19 tests can sometimes drag for hours, snarling traffic and clogging sidewalks. Test result turnaround times are rising, just like the price on quick selling over-the-counter tests sold by some major retailers.

And that’s all happening before the increased demand in testing that could come after the court weighs in on the regulations from the Labor Department’s Occupational Safety and Health Administration. The vaccine-or-test rule would affect an estimated 84 million private sector workers at businesses with at least 100 people on the payroll.

The regulations’ opponents — including business groups and Republican-leaning states — want to pause enforcement, arguing OSHA is exceeding its authority. The Biden administration says OSHA is acting well within its power on a matter of life-or-death importance.

Without court intervention, OSHA has said it would start issuing citations to uncompliant businesses as soon as next week. Penalties related to testing requirements could happen after Feb. 9.

OSHA has previously said there are “sufficient COVID-19 tests available and adequate laboratory capacity to meet the anticipated increased testing demand.” But the agency says it will consider going easy when employers are making a “good faith” effort to follow the rules if there aren’t enough test supplies.

There will be 6.3 million unvaccinated workers taking weekly tests due to the mandate, according to OSHA’s estimates.

So what are businesses and unvaccinated workers going to do if recurring tests become the law of the land at a moment when getting a test has become such a test?

Testing availability, the wait length for results and what to do with waiting workers are all unresolved issues, according to attorney Michael Schmidt, vice chair of the labor and employment department at Cozen O’Connor, a national law firm representing business management.

When it comes to the companies he represents, “a lot are concerned about that and grappling with that at this moment,” Schmidt said.

This month, the country will able to handle 631 million tests, according to Aspinall’s estimates. That’s up from an estimated 593 million in December and projected to grow to 732 million in February and 907 million in March.

The Biden administration says it will be distributing 500 million at-home test kits beginning this month, but Aspinall said it’s not clear what the distribution pace will be.

Now comes to the prospect of regular worker testing at a widespread scale during the omicron wave and deep into flu season when people might resort to COVID-19 tests to see which virus they have.

“Without any significant new investments or new companies in the process,” Aspinall said it’s difficult to see “where that new demand would fit in the current capacity.”

What if tests are scarce when unvaccinated employees need testing?

The rules at issue give businesses two choices: they can opt to require vaccination for all workers, or they can give a testing option for unvaccinated workers who are physically at the workplace.

It’s a weekly test for workers who are people who are constantly at the workplace. For people making sporadic trips, the negative test has to be within seven days of their trip to the workplace, explained Marie Kulbeth, general counsel and vice president of privacy at SixFifty, a legal technology company that’s a subsidiary of the law firm Wilson Sonsini Goodrich & Rosati.

If someone is waiting for their results inside the seven-day window, they can be physically on the job, Kulbeth said. If it’s beyond that timeframe, “they can’t be at the worksite,” she said.

Lab results from PCR tests and antigen tests are both fine by OSHA. Results from over-the-counter tests are also acceptable — but test administration has to supervised by the employer or an “authorized telehealth provider.”

Now what if test availability is tight?

If there’s a lack of adequate test supplies, OSHA said it will look at what the business is doing to try following the rules, “as well as the pattern and practice of the employer’s testing program.” The agency said it will “consider refraining from enforcement where the facts show good faith in attempting to comply.”

The OSHA rules outline what the regulators will expect of businesses, not what’s expected of workers.

But if companies need to do their best to follow the rules, those same companies are going to expect workers try their best to secure tests, Schmidt said. That may mean looking for tests in multiple places and documenting the search too.

“It’s not just going to one CVS down the road” and leaving the effort at that, he noted.

Another avenue is a business contracting with a test provider — but that may be a pricey option, Kulbeth noted. “That’s where companies are making choices based on cost.”

Cost is one reason why the Supreme Court needs to slam the brakes on the regulations, business groups say. It will cost $4 billion during the first four months of 2022 to test unvaccinated workers, plus $3 billion in other compliance costs, they estimated in court papers.

The federal rules aren’t making employers pick up the tab on testing, so it could conceivably fall on the unvaccinated worker. Laws in some states say employers still need to pay for medical tests. But even where employers can pass on the costs, the business groups say it’s unlikely they can in a “historically tight labor market.”

What will workers do while waiting for results? And will they get paid?

OSHA’s rules allow for up to four hours paid leave for each vaccine dose, plus paid sick leave to recover from any side effects following each dose.

But the rules are silent on a company’s pay policies while someone’s outside the workplace and waiting for test results, Schmidt said. State and local laws or bargaining agreements might give guidance, he noted.

It’s another way the OSHA rules are nudges, prods and enticements for workers to get their shots. “They don’t want tests and masking. They want people vaccinated,” Schmidt said.

Supposing the regulations take effect, Kulbeth said for unvaccinated workers “it might be the stage at which they say, ‘Do I want to go ahead and get the vaccine because compliance has become really difficult?’”