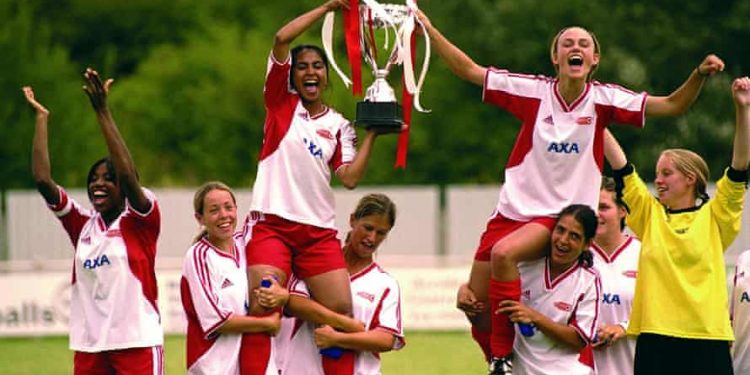 
When Yasmin Hussain was a child growing up in Manchester in the 1990s, she was football mad. At first she played the sport with boys, but when she turned 13 her parents told her she needed to find a women’s team to continue. The problem was, there wasn’t one.

At that time, women’s football was a niche sport rarely depicted on screen. When Bend It Like Beckham came out in 2002 – telling the story of Jesminder and her battle to play football against the wishes of her parents – Hussain was left thinking: “She’s lucky, she had a team to join. I didn’t have one.”

Twenty years later, fans are celebrating the anniversary of the groundbreaking film on Tuesday and looking forward to the biggest ever year for women’s football in the UK as England host the Euros this summer.

When Bend It Like Beckham came out, women’s football was not a professional sport and rarely appeared on television. This year, tickets for the final at Wembley sold out within an hour.

But the film ignited an early spark for many women, and especially British Asians, who saw their own experiences of wanting to play the game but struggling to find a way to reflected for the first time.

The landscape has since changed dramatically. In 2020, the Football Association reported that 3.4 million girls and women now play football, and a 54% increase in affiliated women’s and girls’ teams since 2017. Football is now the most popular sport among women and girls in the UK.

These figures are partly due to the FA’s aggressive “gameplan for growth”, which includes the “let girls play” campaign aimed at encouraging all schools to offer women’s football on the curriculum.

Hussain’s experience mirrors the trajectory of women’s football: after giving up the game, she trained as a coach five years ago, aged 33, reluctant to abandon “the only thing that gives me joy”.

She now coaches Frenford & MSA, a recently setup team of 80 female players, many of whom are of south Asian heritage and have gone from worrying that “nobody else looked like us” to feeling “part of the family” in their grassroots league in east London.

Role models and representation are an important theme of the film, and are the focus of a new documentary from BBC Sport to mark its anniversary. It is a passion project for the journalist Miriam Walker-Khan, who examines the legacy of the film for a generation of female athletes.

“I’d never seen a film about a young British south Asian woman, let alone one who did sport. It meant so much to me in so many ways because it was representation I’ve never seen before or since. It’s more of a cultural moment than a film for me,” she said.

Although considerable progress has been made in women’s sport since the film came out, Walker-Khan said stigma and stereotypes still hold back many south Asians, who are underrepresented in the Women’s Super League. There are misconceptions that traditional religious or family values stand in their way or that Asians “aren’t good at sport because they eat curry, they’re too weak or too small”, she said.

Visibility has been a key driver of the sport’s rapid growth in popularity in recent years, said Stacey Pope, an associate professor of sport at Durham University. This started in 2011, with the creation of the professional Women’s Super League, and reached a turning point in 2015 when the Women’s World Cup garnered widespread, serious media coverage for the first time.

This created role models and inspiration for women, and helped shed the sport’s image as a “bastion of masculinity”, which had been reinforced by a ban on women’s football that lasted until 1971, she added.

Sophie Downey, who runs Girls On the Ball, which has promoted women’s football since 2012, said that, as well as the professionalisation of the game, the biggest changes in recent years have been at grassroots level.

“It’s about young girls having the knowledge they can play for fun and join in, and that access just wasn’t there 20 years ago,” she said.

“I think we’re at the tip of the iceberg, we’ve got the Euros this summer and that will be the biggest moment in history for the sport in this country. There’s a lot of room for it to grow but it’s looking really positive at the moment.”