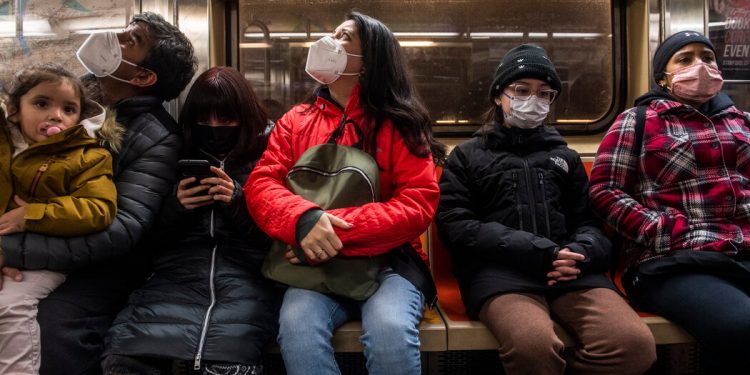 WASHINGTON — A federal judge in Florida struck down the federal mask requirement on airplanes, trains, buses and other public transportation on Monday, less than a week after the Centers for Disease Control and Prevention had extended it through May 3.

In a 59-page decision, Judge Kathryn Kimball Mizelle, an appointee of former President Donald J. Trump, voided the mandate — which also applies to airports, train stations, and other transportation hubs — nationwide on several grounds, including ruling that the agency had exceeded its legal authority under the Public Health Services Act of 1944.

The Justice Department had no immediate comment on whether the Biden administration would appeal — and, if so, whether it would ask Judge Mizelle or an appeals court to stay her ruling pending any further litigation so that the rule could continue to be enforced. A C.D.C. spokeswoman declined to comment.

It was not clear whether airlines would continue to require passengers to wear masks without the rule. But last month, the executives of major airlines — including American Airlines, Delta Air Lines, and United Airlines — had asked the Biden administration to let the mask mandate on planes and in airports to expire in a joint letter.

Still, the ruling also comes at a time when new coronavirus cases are sharply rising again. Last week, the C.D.C. extended the mask rule until May 3, citing a desire to assess the potential severity of the Omicron subvariant known as BA.2, which recently became the dominant version among new U.S. cases. On Monday, the city of Philadelphia reinstated a mask mandate in response, becoming the first major city to do so.

On Monday afternoon, Sara Nelson, the president of the Association of Flight Attendants, a union representing around 50,000 workers at 20 airlines, said in a statement that she was awaiting “more legal analysis on what this means” and that it takes a minimum of 24 to 48 hours to implement and communicate new procedures.

Tim Minton, a spokesman for the Metropolitan Transportation Authority, which oversees New York City’s subways and some of the commuter trains coming into the city, said on Monday: “We are continuing to follow C.D.C. guidelines and will review the Florida court order.”

President Biden had called on the C.D.C. to issue a mask mandate for travelers shortly after his inauguration, and the agency did so on Feb. 2, 2021. It extended that mandate several times, and in April 2022 the Health Freedom Defense Fund, a Wyoming-based advocacy group, filed a lawsuit challenging its legality.

Efforts to reach the group for comment on Monday were not immediately successful. But Judge Mizelle largely accepted its arguments, ruling that the agency had exceeded the authority Congress granted to it to prescribe public health measures like “sanitization,” saying that power was limited to cleaning property — not requiring people to take hygienic steps.

“If Congress intended this definition, the power bestowed on the C.D.C. would be breathtaking,” she wrote. “And it certainly would not be limited to modest measures of ‘sanitation’ like masks.”

If the government’s interpretation of the agency’s powers were accurate, she added, the C.D.C. could require businesses to install air filtration systems, mandate that people take vaccines, or even require “coughing-into-elbows, and daily multivitamins.”

President Donald J. Trump appointed Judge Mizelle to the bench in November 2021, after he had lost re-election. A former clerk to Justice Clarence Thomas, she was 33 years old at the time, making her the youngest person Mr. Trump appointed to a life-tenured judgeship; the American Bar Association declared her not qualified because of her lack of experience, but she was confirmed on a party-line vote.

Lawrence Gostin, a professor of global health law at Georgetown University, said that the Biden administration would have to appeal the decision if it wanted the mandate to continue. He also defended the agency’s authority to issue the mask requirement.

“This is, in my view, an example of partisan judge that seems to be willfully ignorant of the law,” he said. “If there were ever an instance where the C.D.C. has authority to act, the classic case is to prevent the interstate transmission of a dangerous infectious disease.”

Judge Mizelle also faulted the agency for issuing the mandate under “emergency” procedures without delaying for public comment about the proposal — rejecting the idea that there was no time for that since the pandemic was then already a year old.

“The C.D.C. issued the mandate in February 2021, almost two weeks after the president called for a mandate, 11 months after the president had declared Covid-19 a national emergency, and almost 13 months since the secretary of health and human services had declared a public health emergency,” she noted. “This history suggests that the C.D.C. itself did not find the passage of time particularly serious.”

In stressing that 11 months had passed since “the president” had declared a national emergency, Judge Mizelle did not address the fact that a different administration had just taken office.

As of Sunday, there was an average of more than 37,000 new cases a day, an increase of 39 percent from two weeks ago, according to a New York Times database. Though the figure remains far lower than the peak of the winter surge driven by the Omicron variant, experts believe that new cases are increasingly undercounted with the rise of at-home testing.

On Sunday, Dr. Ashish K. Jha, the new White House Covid-19 response coordinator, said the C.D.C. had “made it very clear that they needed 15 days to assess the impact of BA.2 on hospitalizations, deaths, to see if there’s a substantial increase in severe disease.”

“My expectation is that we’re going to gather that data and within a couple weeks we’re going to make a more durable decision,” he said on ABC’s “This Week.”

Judge Mizelle had personal ties to the Trump administration. She is married to Chad Mizelle, who was a lawyer in the Trump White House. In 2019, the White House purged most of the top leadership of the Department of Homeland Security. As part of that shakeup, Mr. Mizelle was installed as the acting general counsel of the Department of Homeland Security, where he signed off on a restrictive new policy making it harder for migrants to obtain asylum.