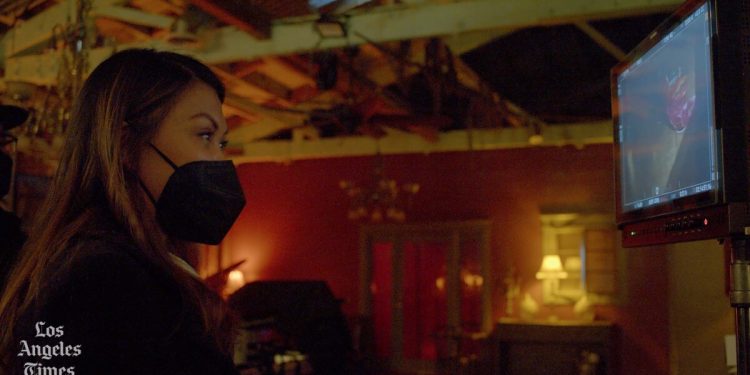 
“Give me your sexiest winks!” director Tess Paras shouted as actors flirted and pretended to swig beer for the camera.

They were rehearsing a musical parody — the song “One Bar More” from “Lesbian Misérables,” a new sketch written by Sibel Damar as part of the 2022 ViacomCBS showcase designed to put performers from underrepresented communities in front of top industry players. (The song is about how there aren’t enough lesbian bars. The Lesbian Bar Project campaign, launched in 2020, found that there were only about 20 left in the nation.)

Paras is an alumna of the ViacomCBS program, and it’s her second year as its executive producer and director. She is most recognized for her acting roles in “Crazy Ex-Girlfriend” and “Just Add Magic” — and she was just cast in the pilot for ABC’s Filipino American sitcom “Josep,” starring comedian Jo Koy.

On set, she’s focused but relaxed. That’s because she prepared a game plan to support her mental health during a stressful 20-day shoot. She scheduled time to ensure she got enough sleep and exercise. She and her partner arranged meal prep and assigned chores so that she could come back to a comfortable home after each long day. And she made sure to talk to her therapist about her anxieties: which worries were worth focusing on and which were better to let go.

As a mental health advocate for the Filipino American community, Paras talks openly about her struggles with depression and anxiety. But she also wants people to understand that it’s something she actively manages. By sharing her experiences, she’s trying to help normalize conversations around mental health, especially for communities of color where stigma around mental illness remains.

“I have this joke that my best friends, who are also comedians, know what medications I’m on,” Paras said.

But she said it’s different when she’s talking to her family.

“If I were to say to them, ‘Oh, I’m anxious, I needed to take a Xanax,’ people would be like, ‘Are you OK? What’s wrong with you?’” she said. “And all of a sudden, it’d be something shameful to talk about, rather than something to make light of or something that is completely normal.”

She’s had depression since she was a teenager, but back then she didn’t have the language to describe it.

“I think my family was like, ‘Why is she like this? Why is she the sensitive one?’“ she said.

Though she’s been able to make a living in Hollywood, she faces the challenge of working in an industry full of rejection that can make her feel like “the smallest and most insignificant person in the world.” It’s helped her to create art about what she was going through. And while it’s taken time, telling her story publicly has also helped her talk to her family about her mental health journey.

There was the time she wrote and starred in “Typecast,” a parody of Lorde’s “Royals” about actors who can’t find work unless they are typecast as ethnic stereotypes. Paras wrote it in the 2014 ViacomCBS diversity program when she realized that “white girl’s nerdy friend” was the only role she was getting auditions for, and it was affecting her sense of self-worth.

And in 2019, she directed her most personal short film, “The Patients,” based on her experience as a survivor of intimate partner violence.

“There were days when I couldn’t get out of bed,” she said. “I was frightened and had startled reactions to certain things because there were certain PTSD moments that I was having from somebody breaking into my house.”

The film takes place in the hospital after an assault. Paras’ character, Regina Ramos, is in the exam room figuring out what her options are, while her family is in the waiting room figuring out how they can best support her — and making mistakes along the way.

“As a Pinay, we don’t talk to our parents about that,” she said. “And my parents were very much like, ‘Go to therapy. Figure it out. We don’t know what happened.’ They’re creating some distance.”

She said she wrote “The Patients” because she wanted to connect with her family. Paras recalls sitting nervously next to her parents at the Los Angeles Asian Pacific Film Festival premiere.

“When I would see my mom laugh at an actress depicting her, that was so huge to me,” she said. “And other Filipinos will understand this, but afterwards, I was like, ‘What do you think, Mom?’ She was like, ‘I’m a proud mama. Are we all going to eat? Are your friends coming?’

“That’s the A-plus of a Filipino American filmmaker experience [for her] to be like, ‘I’m a proud mom. Are your friends coming? Let’s go eat,’” she said. “One of the best moment of my life, for sure.”

It’s been a lifelong journey for Paras to learn how to value herself, she said. As she’s become more public about her struggles, she’s seen how many Filipino Americans relate and want to see stories like hers onscreen. People will message her after watching the film to let her know that they — or their friend or family member — have gone through a similar ordeal.

But many of the conversations are private. Paras pointed to hiyathe Filipino concept of shame.

“I think it’s tough, especially in the Filipino community or Asian American community where there might be a mark on you if you are to ever share that there was something bad going on,” she said. “But it shouldn’t be shameful to share what’s going on because people will identify.

“For me, it’s about not being ashamed anymore. Just sharing it. And if one person gets affected and one person says, ‘Hey, this is helping me recognize some patterns in my life that feel unhealthy or unsafe,’ then it’s a service. Then you know that candor is worth something, for sure.”

The empathy that she’s developed from living with depression and anxiety also helps her as a director, actor and producer, she said.

“Even now, during showcase, it’s my first time ever working with a Deaf actor, and he’s taught me so much about how to look at a script and go through it and talk about how to make this script friendlier and more inclusive to the community,” she said. “So because I have my own struggle, I feel like I’ve been able to be a better ally to him and be more open to listening to him.”