A highly performing transistor based on an inorganic metal halide perovskite 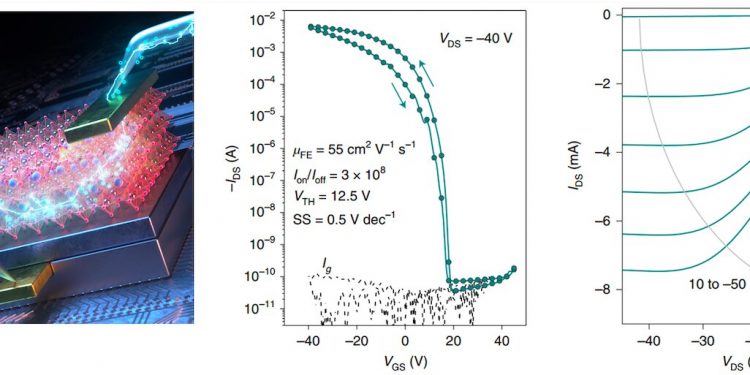 These transistors, presented in a paper published in Nature Electronicsexhibit high field-effect hole mobilities and on/off current ratios, as well as a high operational stability. In the future, they could be used to create driving circuits for OLED displays, as well as a variety of analog and digital circuits.

“Metal halide perovskites have been very actively studied over the past decade for applications in a photovoltaic cell and light-emitting diodes (LEDs), due to their excellent optoelectronic properties, solution-based low-cost processing, and unique defect tolerance character,” Yong-Young Noh, one of the researchers who carried out the study, told TechXplore. “However, despite the very low effective mass of charge carriers in them (0.1–0.2), studies of their application as a semiconductive layer in thin-film transistors have been rare.”

Noh and his colleagues have been conducting research exploring the potential of perovskite-based transistors for over seven years. Their recent paper builds on their previous works and specifically utilizes CsSnI3an unusual perovskite material known to undergo a variety of complex phase transitions.

The principle underlying the functioning of the new transistors created by the researchers resembles that underpinning the operation of conventional, silicon-based enhancement mode transistors. Essentially, when an appropriate voltage is applied between the transistor’s source and drain electrodes, this voltage flows through the device towards the drain.

“We found a way to increase the grain size of perovskite poly-crystals by the combination of tin fluoride additive excess CsI precursor, and replacement of Sn with 10% Pb,” Noh explained. “In addition, by using Sn-based perovskite (most high-performance metal halide perovskite devices such as solar cell and LEDs use 100% Pb), we achieved high performance while minimizing the use of Pb, a harmful metal for the environmental.”

In initial evaluations, the transistors developed by Noh and his colleagues outperformed all previously developed transistors based on metal halide perovskites. Remarkably, their performance is comparable to that of polysilicon transistors that are currently used to fabricate driving circuits for OLED displays.

A further important advantage of the newly developed transistors is that, in contrast with other existing devices based on metal halide perovskite, they contain a significant lower quantity of lead. This could facilitate their widespread use, as lead is known to be highly toxic and harmful to the environment on Earth.

“Although metal halide perovskites currently show high performance compared to silicon in solar cells, most high-performance perovskite devices use lead,” Noh said. “I expect that these lead-based devices will be difficult to commercialize, due to environmental considerations. In that sense, our findings mainly used tin instead of lead and fundamentally overcome this toxic issue of metal halide perovskite.”

In the future, the new transistors introduced by this team of researchers could be used to control the flow of electrical current in various electronic devices, including OLED displays for computers, TVs and smartphones. In addition, their design could inspire the development of better performing solar cells and LEDs containing lower amounts of lead.

“Currently, the tin-based transistor developed by us shows high performance, but its air stability is low from the point of view of commercialization,” Noh added. “Therefore, we eventually intend to further improve the air stability of the device. In addition, the device was manufactured through a solution process, but I would like to obtain the same performance using the vacuum deposition process, which can be mass-produced commercially.”

Half a Million Chickens to Be Destroyed in Bird Flu Outbreak