A Manhattan clash of the titans: Redistricting pits Nadler vs. Maloney in primary – POLITICO 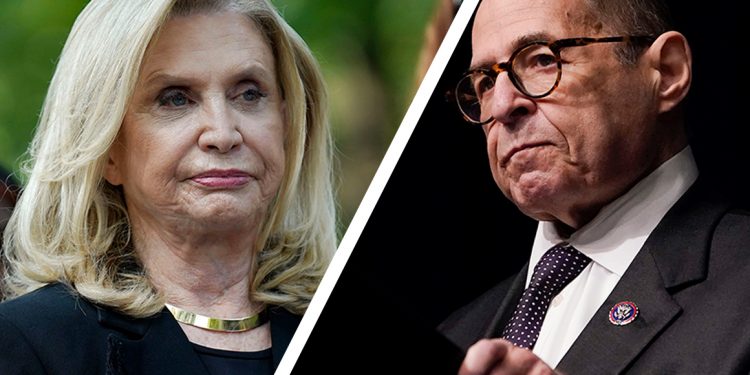 The Upper East Side congresswoman plans to argue that her record of accomplishments outstrips that of her cross-town rival. “The main difference is I get things done,” she said.

Her Upper West Side neighbor is leaning on his own resume to convince voters to pick him.

“I look forward to the opportunity to continue serving the West Side and I’m excited to introduce myself and my record of principled, progressive leadership more fully to the residents of the East Side,” Nadler said in a prepared statement Monday. “I want the voters to know that this great district belongs to no one but them, not any single candidate or politician. I hope to earn that right.”

During a political breakfast both candidates attended ahead of the Celebrate Israel Parade Sunday, Nadler made a point of reminding those in the room he remains the sole Jewish member of the city’s congressional delegation — a clear appeal to Jewish voters in the district.

The two representatives — whom political insiders say are not particularly close and have clashed on occasion — are now figuring out whether to fight for support on each other’s turf or drive up turnout in their own neighborhoods as they approach newer voters who’ve been shifted into the district.

And while each is strategizing how to defeat the other, both are under attack from Suraj Patel, a lesser-known contender who is taking his third stab at defeating Maloney.

“New Yorkers want change and change is on the ballot,” Patel said in a statement Monday. “There are no incumbents in this race, just two career politicians — but no one is entitled to any congressional seat. I am running because we need a new generation of leaders to tap into New York’s potential for a better tomorrow.”

The Manhattan matchup is one of the most buzzed-about contests to result from a chaotic redistricting process that entailed a court battle, accusations of gerrymandering and fissures throughout New York’s political establishment.

Nadler currently represents the 10th District, based on the Upper West Side, and Maloney represents the 12th on the Upper East Side. But after the Democratic-controlled state Legislature’s maps were thrown out by the courts for unconstitutional gerrymandering, a special master drew up a plan that erases the traditional east-west division of local political lore. Instead, the 12th District, finalized over the weekend, includes both neighborhoods and snakes down through midtown Manhattan.

Nadler’s team points to a perceived electoral advantage: His area is home to some of the most civically active voters in the city, who routinely turn out in high numbers whether they are selecting a United States president or school board member.

“In Jerry Nadler you have a congressman who is insanely popular, who has won his last races by stratospheric margins, running against another member who has squeaked by — and if anything, she has squeaked by with a narrative that she is not as progressive as, say, Jerry Nadler,” said political consultant Jonathan Rosen, a friend of Nadler’s who is not working on the race. “Add into that an August primary, when the Upper East Side is a ghost town, and that’s a very strong set of cards for Nadler.”

But Maloney’s team believes she has the upper hand: Sixty-one percent of the newly drawn district encompasses her home turf, compared with 39 percent for Nadler.

Maloney said she was taken by surprise when Nadler publicly announced he was running in the 12th District, something he did not mention when the two spoke after the special master released a preliminary set of maps last week.

“He announced for Congress without the courtesy or the respect of giving me a call,” she said.

A spokesperson for Nadler’s campaign said the two talked on the train heading to D.C., and he told her he was going to run where he lives, which ended up being the 12th, on the day the maps were released.

Later, they spoke on the House floor and Nadler pushed her to switch to the 10th District, she said — an option she said she rebuffed because there is little overlap between that district and her current one. Nadler, on the other hand, now represents large chunks of Brooklyn that will remain in the 10th.

“It’s ridiculous … He could run there. He could win there. He’s represented it for 30 years. We wouldn’t have this problem if he would run where he’s represented 30 years,” she said. “I think his actions speak for themselves.”

“It’s very tough to say who has the advantage. Can you out-progressive each other? No, that’s very tough, because they’re both good on the issues.”

Nadler, 74, and Maloney, 76, were both elected to their seats in 1992. Nadler chairs the House Judiciary Committee, while Maloney heads the Oversight Committee.

Running against each other will present a challenge for two pols with much in common, political experts say. “It’s terrible for a strategist to have to say he is stumped, but I am stumped,” said Democratic consultant Jon Reinish.

“It’s very tough to say who has the advantage. Can you out-progressive each other? No, that’s very tough, because they’re both good on the issues,” he said. “They are old school New York City liberals, one from the West Side, one from the East Side. But there’s no visible or discernible policy differences between them. That makes this very hard.”

Maloney said she’ll be touting her record on issues including securing money to build the Second Avenue subway, passing a major postal reform bill and pushing through a health care program for Sept. 11 first responders and survivors. “I’m a proven progressive leader with a track record of delivering results for my district and never backing down from a fight,” she said.

The primary, originally scheduled for June, has been pushed to Aug. 23 due to the redistricting battle — making it likely turnout will be low, especially in an affluent district where many voters will be out of town on summer holidays.

“That portion of Manhattan empties out in the summer,” Reinish said. “Each now has a Hamptons problem … Both candidates are competing against each other in a time when each of their bases is going to be away.”

Maloney, who was already facing a competitive primary before the redistricting fight, has the financial advantage with nearly $2.3 million raised as of the last campaign filing, and $1.1 million on hand. Nadler has raised $917,031 but spent less, and now has $847,954 in his account.

Maloney came within a few points of losing her seat in 2020, when Patel put up a strong showing, while Nadler more comfortably triumphed over challenger Lindsey Boylan.

Reinish said it’s feasible that either candidate could draw voters from the other’s base, since both are well known across Manhattan. “New York City voters are so used to these people, even if you live a couple blocks in and a couple blocks out,” he said. “The East Side knows Jerry Nadler really well, and conversely the West Side knows Carolyn Maloney really well.”

Before the courts intervened, the map drawn by the Legislature appeared designed to help Maloney: It kept the district based on the Upper East Side, but cut out some neighborhoods in Queens and Brooklyn where she had struggled, while adding a small slice of the West Side.

Prior to the shakeup, Nadler had been helping Maloney, lining up supporters for her in the stretch that was expected to move to her district, according to a person close to the campaign. Maloney was even planning to feature Nadler in ads.

In the previous 12th District, Maloney faced challenges from Patel, an attorney and former Obama staffer who came close to defeating her in 2020, and Rana Abdelhamid, who was backed by groups on the left.

“There are two candidates in this race — Carolyn Maloney and Jerry Nadler — who are going to compete to take credit for the current state of our country and the Democratic Party. If you are satisfied with the state of New York, the country or the Democratic party, they are your candidates,” Patel said in his statement, charging that both had done little to address vacant storefronts in the district, inflation and a shortage of baby formula.

“Sixty years combined is enough. All we can expect from the 61st year is more dynasty, more entitlement, and the loss of more Democratic seats thanks to their selfish gerrymander.”

Abdelhamid, who lives in Queens, which is not a part of the new district, has not made a decision on the future of her campaign.

Send us photos of your political mailers:

This form requires JavaScript to complete.
Powered by CityBase Screendoor.

Some voters on the Upper West and East sides said they plan to stick with their longtime representative — but others were keeping an open mind.

“When you have two people like Nadler and Maloney who have been in the game for so long, you just know it’s going to be intense,” said Henry Ellis, 43, who said he’ll likely vote for Nadler “just because he’s already in my district. Also because he’s made civil rights a huge stance in his career.”

On the Upper East Side, Shaun Catier, 47, said he’s behind Maloney. “I feel like Maloney has got it in the bag. Sure she and Nadler have been in the game for probably almost the same amount of time, but I see her winning hands down,” he said, citing her work on women’s rights. “It’ll be a tough competition, but I’m rooting for Maloney.”

Adrienne McKenna, 45, of Hell’s Kitchen, said she has been in Nadler’s district and voted for him in the past, but would give Maloney a serious look this time around. “Maloney and Nadler are just both great candidates. It’ll definitely be a tough race,” she said. “It would be nice to have a woman running the area. From what I’ve seen of her and what she stands for, she definitely caught my eye.”

Many political insiders have hoped to avoid the primary — trying to persuade one of the members to run in the vacant 10th District instead, which has already drawn a crowded field of its own, headlined by former Mayor Bill de Blasio. Others hoped one or both would take the opportunity to retire. But Maloney and Nadler have shown no interest in either option.

The court-appointed special master also got a host of pleas in public comments to keep the East and West sides in their own districts — but rejected the idea.

“The East Side versus West Side distinction tends to break down as we move further south,” he wrote in a memo accompanying the final map. “Also, even the areas of the city bordering on opposite sides of Central Park do not appear to be as strongly distinguished in terms of economic and demographic differences as they once were.”

Chris Coffey, a political consultant who is friends with Maloney, predicted Nadler would focus on his role in the Trump impeachment proceedings.

“He’ll talk about Trump and she’ll talk about a record of delivering, and we’ll see,” Coffey said. “It’s going to be a really, really, really low-turnout election, and at the end of it one of these two lionized congressional members is going to go home empty-handed, and I’m sure not the way either of them want to end their long, storied careers.”

Wall Street rallies on back of big tech, banks – Reuters

Wall Street rallies on back of big tech, banks - Reuters