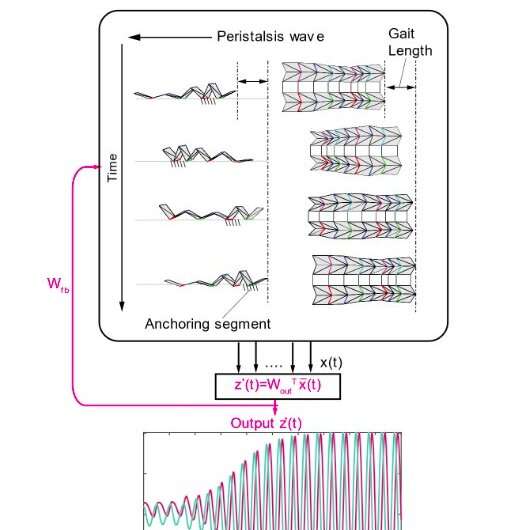 Reservoir computing is a highly promising computational framework based on artificial recurrent neural networks (RNNs). Over the past few years, this framework was successfully applied to a variety of tasks, ranging from time-series predictions (i.e., stock market or weather forecasting), to robotic motion planning and speech recognition.

Researchers at Clemson University have recently tried to combine physical reservoir computing techniques with origami designs, with the aim of enabling more advanced crawling capabilities in robots. The new framework they created, presented in a paper pre-published in arXiv, could open up new, exciting possibilities for the development of sophisticated soft robotics systems.

“Our research as part of the Dynamic Matter Group at Clemson University focuses on understanding and exploiting unique mechanical properties of dynamic meta-structures and mechanisms such as origami, compliant mechanisms and composite laminates,” Priyanka Bhovad, one of the researchers who carried out the study, told Tech Xplore. “My research involves utilizing origami and compliant mechanisms to design ‘mechanically intelligent soft robots’—more specifically, using the morphology of the robot itself for control and computation tasks.”

When developing their framework, Bhovad and her Ph.D. advisor Suyi Li drew inspiration from the body structures of animals. More specifically, they tried to reproduce the ways in which animals use highly interconnected networks of nerves and muscles, as well as how these networks share the information they gather with the brain.

“The animal body’s morphology is an integral part of its actuation, control and ultimately its brain’s decision-making process,” Bhovad explained. “This leads to far superior efficiency than our engineered soft robots in terms of responding to and adapting to unstructured dynamic environment.”

The researchers’ framework implies that robotic systems can contain networks of sensors and actuators distributed throughout their ‘skeleton,” just like the bodies of animals contain intricate networks of nerves and muscles. To artificially replicate these biological networks, the team used physical reservoir computing techniques and designs inspired by the Japanese paper folding art of origami.

“Origami possesses non-linear folding dynamics that is essential for a physical reservoir,” Bhovad said. “It is also inherently compliant and thus ideal for designing soft robotic skeletons. It is easy to manufacture complex 3-D mechanisms from a flat sheet of material and origami design principles are applicable to various length scales as well. Due to all these advantages, we investigated the use of origami as a physical reservoir and showed how we can harness its computing power for robotic locomotion generation.”

In the early 2000s, computer scientists started seeking for effective and simple strategies to train RNNs, which did not involve backpropagation (a renowned approach to train machine learning algorithms). This inspired the idea of using a ‘fixed’ type of RNN, which is now referred to as ‘reservoir.”

A team of researchers at Jacobs University Bremen (Herbert Jaeger and colleagues) introduced a class of algorithms that they dubbed echo state networks (ESNs), while other scientists at Graz University of Technology (Wolfgang Maass and colleagues) devised what they refer to as liquid state machines (LSMs). Subsequently, these two concepts, ESNs and LSMs, were combined under the umbrella term reservoir computing (RC).

“In physical reservoir computing, a ‘fixed’ dynamical system (aka. the ‘reservoir’) is used,” Bhovad said. “Researchers have previously shown that a generic nonlinear mass-spring network, octopus-like soft robotic arms and tensegrity structures can be used as dynamic physical reservoirs, and robotic skeletons. The reservoir nodes have fixed interconnections and input weights, and only the linear output readout weights are trained by simple techniques like linear or ridge regression.”

The reservoir proposed by Bhovad and her Li essentially consists of a network of sensors and actuators distributed throughout the creases of origami-based structures. Using these sensors and actuators, the researchers were able to measure how the origami structure folds and unfolds in response to external stimuli.

“The reservoirs’ dynamics transforms the input data stream into a high-dimensional-state space, capturing its nonlinearities and time-dependent information for computation tasks,” Bhovad said. “As a result, we simplify the central controller, by using it to calculate only the output using linear readout weights.”

The approach devised by Bhovad and Li can autonomously generate optimal control signals simply by feeding the current output back to the reservoir. This ultimately allows it to reject disturbances and promptly respond to changes in input stimuli by modulating output signals.

“We used the origami reservoir to emulate multiple non-linear filters simultaneously, perform pattern generation and modulate outputs, all of which are relevant to robotic applications,” Bhovad said. “For example, pattern generation tasks such as periodic trajectory generation are important for robot locomotion. Modulation tasks ensure that the robot can respond to changing external inputs by let’s say changing the trajectory.”

Bhovad and Li evaluated the effectiveness of their framework by performing extensive numerical simulations. They found that their technique could complete computation tasks even without measuring the response of all origami creases. The researchers thus selected a subset of creases, sensors and actuators to focus on, which reduced the complexity of the origami reservoir system’s network without compromising its overall performance.

The framework can autonomously generate global target behavior for robotic systems instead of having to plan and control the motion of different components individually. In their study, Bhovad and her colleagues showed how it could be used to plan the locomotion of an earthworm-inspired, peristaltic crawling robot.

“We show that origami’s nonlinear folding dynamics possess significant computing power,” Bhovad said. “We conduct extensive numerical simulations to uncover the linkage between origami design and its computing power, providing the guideline to optimize computing performance. Finally, we demonstrate how to directly embed reservoir computing in an origami robotic body to generate earthworm-like peristalsis crawling without using any traditional controllers.”

The innovative reservoir computing framework devised by this team of researchers could soon be used to create new origami-based soft robots that utilize simple mechatronics, interact with the environment via networks of distributed sensors and actuators, and respond to external disturbances by modulating their activities or behavior. In order for these robots to operate efficiently and autonomously in unstructured, unknown and dynamic environments, their ‘bodies’ and ‘brains’ should work together, continuously exchanging information gathered by sensor-actuator networks and using it to complete low-level control tasks (e.g., planning the robot’s movements and trajectories). The approach introduced by Bhovad and her colleagues could be an important step towards realizing this goal.

The researchers are now trying to experimentally realize their origami-inspired reservoir computing approach to further validate its effectiveness. In addition, they would like to identify ways to accurately model physical forces that affect a robot’s movements (i.e., friction, reactions to different types of terrain, etc.) in order to incorporate this information into their framework’s predictions and further improve its performance.

“In the future, we want to couple the reservoir computing framework with unique mechanical properties that origami can offer,” Bhovad said. “For example, origami mechanisms can exhibit multi-transformability, multi-stability, nonlinear stiffness, and negative Poisson’s ratio. Combining these two approaches will open up new avenues in the design of next generation of soft robots with embedded mechanical intelligence.”