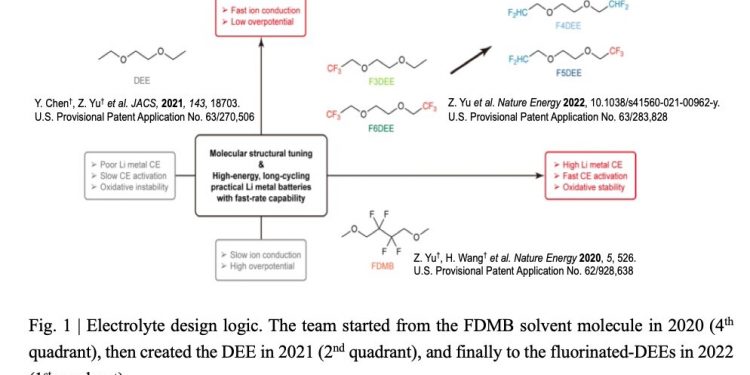 
Lithium (Li) metal batteries are currently perceived as one of the most promising next-generation batteries. As a result, many academics and companies worldwide have been focusing their research efforts on the development of these batteries, in the hope to gradually move towards so-called “carbon neutrality,” a state of net-zero carbon dioxide emissions.

Despite their advantageous qualities, Li-metal batteries have so far exhibited some issues. The most notable among these are the formation of Li dendrites and a short cycle life. Many engineers specialized in the design of batteries have thus been trying to devise strategies to overcome these issues.

One of the most realistic and promising approaches for overcoming the issues linked to Li-metal batteries is to engineer alternative, liquid electrolytes. In a recent paper published in Nature Energy, a team at Stanford University introduced a new solvent molecule that could be used to improve the performance of these liquid electrolytes.

“Liquid electrolyte engineering strategies are fully compatible with current large-scale production lines (in terms of either chemical industry or battery production line),” Zhiao Yu, one of the researchers who carried out the study, told TechXplore. “Some recent works in electrolyte engineering (such as optimization of salt additives, regulation of solvent recipes, high-concentration and localized high-concentration electrolytes, etc.) have indeed improved the cyclability of lithium metal batteries to a certain extent, but the current methods still lack a clear understanding of structure-property relationships.”

Two years ago, Yu identified and patented a special solvent molecule for Li-metal battery electrolytes, which he dubbed FDMB. At the time of its discovery, the molecule did not have a CAS number (i.e., ID number used to catalog chemicals), which suggests that it might have never been identified before.

Yu found that, in contrast with other existing solvent molecules, FDMB enabled outstanding battery performances. In addition, it could be used as a single-salt, single-solvent and within a low-concentration formula.

“This feature was extremely unique at the time, and even until now, only a few electrolytes can do this,” Yu explained. “However, FDMB is not perfect. I found that the FDMB-based electrolyte suffered from overpotential increase during long-term battery cycling; in other words, after using the battery for long you will find that the delivered voltage is not as good as before. This is fatal for batteries.”

According to Yu, the unfavorable quality he discovered might be linked to the unique interaction between Li+ ions and the FDMB liquid, which leads to poor ion transport in the electrolyte. Last year, Yu and some of his colleagues, thus identified and patented another molecule, which they dubbed DEE. Remarkably, they found that DEE outperformed FDMB and did not exhibit the same overpotential increase during long-term battery cycling.

“Despite its good performance, we found that DEE still compromised the stability of Li-metal electrodes,” Yu said. “Therefore, as part of the new study, I used DEE molecules as the backbone to fine-tune the degree of fluorination of the end groups and obtained a family of fluorinated-DEEs (which we patented) that achieved an optimal balance between electrode stability and high ionic transport for lithium metal batteries.”

Remarkably, when Yu and his colleagues checked the CAS catalog, they found that one among the fluorinated DEEs (which is F5DEE) they discovered had not yet have an ID number and thus had not been unveiled in previous studies. Moreover, electrolytes based on these new solvents achieved a 99.9±0.1 percent Li-metal efficiency, which is probably the highest value until now for electrode stability, as well as long-term cycling for practical Li-metal full cells. Finally, the solvents enabled what is probably the longest cycle-life reported so far for industrial, anode-free lithium iron phosphate based, jelly-roll pouch cells.

“Beyond the battery performance, these solvents can be readily synthesized at large scales through low-cost raw materials and simple synthetic procedures,” Yu said. “For me, the most notable achievement of our work reaches beyond the field of battery development. Instead, rather, it is that we showed how to ‘defeat yourself.’ The FDMB solvent molecule I made in 2020 already did quite well; but when I found its drawbacks as elaborated above, I decided to create something new to ‘defeat’ my own FDMB.”

“The overall process was not so simple and throughout the study, I really felt the charm of chemistry: step-by-step fine-tuning,” Yu said. “I could have published an article just with these two molecules, but I thought that I had to further push the performance. Then a sparking idea came to my mind: I might be able to modulate the battery performance by finely tuning the fluorination degree one atom by one atom.”

When Yu started trying to synthesize F4DEE, he found that while it achieved remarkable performances, it still had a small flaw. To overcome this flaw, he further fine-tuned its molecular structure and attained F5DEE, a molecule that enables state-of-the-art performances and was not registered before.

“The electrolyte solvent molecules in our work can be synthesized in large scales and with low-cost precursors,” Yu said. “Moreover, our liquid electrolyte-based metallic lithium battery or anode-free battery technology is compatible with existing mass production lines, so there is no need for a revolutionary upgrade for production and a lot of time can be saved for manufacturing engineering.”

The recent work by Yu and his colleagues was funded by the U.S. Department of Energy (DOE). The team has now patented all these new highly promising molecules they uncovered, and are planning to introduce it into the market.

“The famous investor, Chris Sacca, once said that ‘ideas are cheap; execution is everything,'” Yu said. “Efficient execution and realistic products recognized by the market and users are the things we should do. The same principle applies perfectly in the battery field.”

In the future, the highly performing solvents identified by this team of researchers could ultimately help to develop next-generation lithium-metal batteries, overcoming some of the issues encountered in the past. In their next studies, Yu and his colleagues will seek out new solvent molecules with even better Li metal battery performance, high safety and eco-friendliness, which can fulfill the needs of consumers even better.

“Both near-future and far-future technologies should be considered and seriously pursued in the development of new materials, of which the former is for short-term wide applications while the latter is for long-term vision and cyberpunk-style metaverse,” Yu added. “Based on work by Prof. Zhenan Bao, Prof. Yi Cui and Prof. Jian Qin’s research groups, we will now further develop our electrolytes and Li metal batteries in collaboration with the battery industry, national laboratories and our potential startup.”

Creating a drag-friendly garment that changes in real time

Salt and a battery – smashing the limits of power storage

Thanks to the renewables’ boom,...