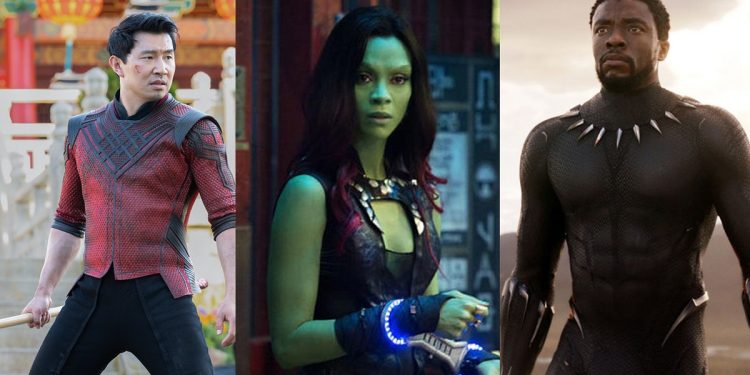 Marvel has been having a seriously impressive run of late. Sure, Eternals wasn’t the best, but the release of movies like Shang-Chi and the Legend of the Ten Rings and Spider-Man: No Way Home showed that the Marvel franchise has a whole lot to offer fans in the post-Avengers phase – and we’re very excited to see what’s next.

If you’re anything like me, catching the latest Marvel movies has got you thinking about the full collection of films. Which ones did you enjoy most? Do you remember them well enough? Are there any movies worthy of a re-watch?

While there’s good reason to give the complete Marvel collection a watch on Disney+ in chronological order, some fans may prefer to skip the underwhelming movies and only tune into the best of the bunch.

Thing is, there are a lot of incredible films to get through. So which Marvel movies are considered the best? We consulted our favourite resource, Rotten Tomatoes, to find out.

The best Marvel movies, according to Rotten Tomatoes

As you’ll soon notice, loads of these films received tied scores which meant the top spots were shared between a long list of films. We’ve gone ahead and listed Marvel movies with a Tomatometer rating of 90% and above.

Captain America: The Winter Soldier follows the events of the Battle of New York and we see Cap (Chris Evans) settling into life in D.C as a S.H.I.E.L.D agent. Fans will recall that this is the film that gave us the “on your left” introduction to Falcon (Anthony Mackie).

The film follows as Captain America, Falcon and Black Widow attempt to neutralise a group of assassins, with the Winter Soldier (or Bucky) sitting as their central enemy. The Winter Soldier is an important one because we meet some soon-to-be key characters and learn more about super soldiers and HYDRA.

This is the one where all your favourite superheroes are fighting against each other. Following the destruction of Sokovia in Avengers: Age of Ultron and the deaths of a number of aid workers in Lagos, the United Nations (and Tony Stark) decide its time to police the movements of the Avengers.

The Sokovia Accords is drawn up and the team is split over the call. In essence, you’ve got team Stark who agrees with the decision, and team Rogers who refuses to sign and ultimately goes into hiding.

Spider-Man: Far From Home is the second film in Tom Holland’s collection of Spidey movies and it’s the one that sets up all the chaos that we see play out in No Way Home.

Following the events of Avengers: End Game, Peter is attempting to process it all and somehow live a normal life. That obviously doesn’t happen and he meets a unique villain in Quentin Beck/Mysterio (Jake Gyllenhaal).

It’s unsurprising to see this movie in the list of Marvel’s best; it’s a great watch.

The Avengers movie that started it all. Marvel’s The Avengers was the first time all of our superheroes grouped together to fight a common threat (in this case, it was Loki).

This movie is an important watch because this is the beginning of Earth’s threat from Thanos – though we didn’t know it at the time – and if you watched Hawkeye, you’ll know these events inspired the birth of heroes to come.

Shang-Chi and the Legend of the Ten Rings exploded onto the scene as part of Marvel’s newer generation of films and it really did not disappoint.

More of this, please.

Worthy of a top spot in a list of the best Marvel movies for its soundtrack alone, Guardians Of The Galaxy introduced us to a new band of misfit heroes in Peter Quill/Star-Lord (Chris Pratt), Gamora (Zoe Saldana), Drax the Destroyer (Dave Bautista), Groot (Vin Diesel), and Rocket Raccoon (Bradley Cooper).

In essence, this film follows Quill as he steals an orb that makes him the key target of a villain known as Ronan. With his colourful crew, Star-Lord navigates a wild and dangerous space adventure, while attempting to hold onto their lives.

Homecoming was the first feature film for Tom Holland’s Spider-Man and in this movie, we see Spidey go up against Adrian Toomes/Vulture (Michael Keaton) as he attempts to take on more challenging problems after working with the Avengers in Captain America: Civil War.

It’s an important film as we see Peter Parker’s relationship with Tony Stark develop while he gets himself into some complicated situations.

If you haven’t yet seen the third Spidey film starring Tom Holland, do yourself a favour and get out to watch it.

No Way Home follows the events of Far From Home where Mysterio has revealed Peter Parker’s identity to the world. In an attempt to fix all that, Parker goes to Doctor Strange and asks if he can make everyone forget he is Spider-Man.

This results in the blending of alternate universes and former foes. It’s a gripping watch from start to finish.

Poor Thor had a bit of a dull run before he got the Taika Waititi treatment. In Thor: Ragnarök we see Loki (Tom Hiddleston) and Thor (Chris Hemsworth) unite to take down their nasty-ass sister Hela (Cate Blanchet) who has turned up to try and take over Asgard.

This one is probably worth a rewatch ahead of Thor: Love and Thunder‘s release.

I mean, what can we say about this one? Avengers: Endgame showcased the battle of all battles. Our favourite heroes banded together to fight Thanos and reverse the blip – and many of them lost their lives in the process.

Easily one of the best Marvel movies ever made.

Well this is kind of gutting, isn’t it? The beginning of Iron Man’s journey and the end of it are tied in second place together.

If you haven’t yet seen Iron Man, the film introduces us to Robert Downey, Jr as billionaire genius Tony Stark/Iron Man and follows his journey in building the suit and vowing to use his tech to protect the world from harm.

Chadwick Boseman’s Black Panther continues to reign supreme in the number one spot, and for good reason.

The film is a classic tale of a family battling for power, just set in the striking and supremely technologically-advanced African nation of Wakanda.

After the loss of his father and the events of Captain America: Civil War, T’Challa/Black Panther, returns to Wakanda to take his place as king, only to be challenged by his cousin N’Jadaka/Erik Killmonger (Michael B. Jordan).

An epic, emotional battle follows as the Black Panther fights to stop the power of Wakanda from ending up in the wrong hands.

If you want to begin working your way through any of these films, Disney+ is the place to find all of them save for Spider-Man No Way Home, which you can still find in Aussie cinemas right now.