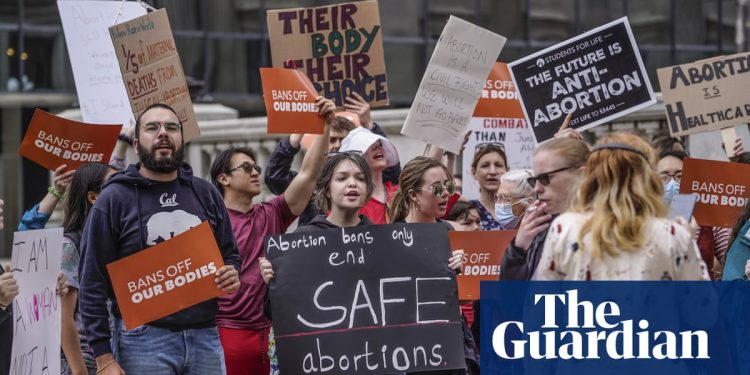 The end of a federal right to abortion in the US would have profound and detrimental impacts on medical education, the freedom to practice medicine and patients’ ability to seek medical advice without fear of prosecution, doctors and legal experts said.

The warnings come as a leaked supreme court draft opinion and accompanying reporting from Politico show a majority of justices voted to overturn Roe v Wade, a landmark decision that has protected the federal right to an abortion for nearly 50 years.

If the court’s opinion does not change substantially from the leaked draft, at least 26 states would be certain or likely to ban abortion. Until the court issues a final decision, expected in June, Roe prevents states hostile to abortion from banning the procedure before a fetus can survive outside the womb.

“If this decision ends up being similar to what [was leaked], this is going to substantially affect abortion care, obstetrics care and healthcare more generally,” said Dr Nisha Verma, a Darney-Landy fellow with the American College of Obstetricians and Gynecologists.

Such a decision would represent a seismic shift in the American healthcare landscape, with devastating consequences for medical care, education and the doctor-patient relationship.

“It really starts with doctors, because overturning Roe will have a severe chilling effect,” said Lindsay Lewis, co-author of a report by the National Association of Criminal Defense Lawyers that studied the potential criminal effects of ending Roe, and a board member of the same organization.

Abortion restrictions are now more likely to contain extremely narrow exemptions to save the lives of pregnant people, severe criminal penalties for providers and to lack exemptions for rape and incest.

That puts doctors in the position of trying to interpret legislation that is often extremely narrow. In one recent example, an Oklahoma abortion ban makes performing an abortion a felony punishable by up to 10 years in prison. In addition, medical exemptions for the procedure are exceedingly narrow.

An abortion can be legally performed only in the event the medical emergency “cannot be remedied by the delivery of the child”. “Medical emergency” is strictly defined as when a threat to a person’s life “by a physical disorder, physical illness or physical injury including a life-endangering physical condition caused by or arising from the pregnancy itself”.

Functionally, these restrictions on medical exemptions have made new abortion bans much stricter than even some that existed before Roe was decided, when some states allowed women to seek clearance for an abortion from hospitals boards on the basis of psychological crises.

“For basically the past decade, or a little over the past decade, these exceptions have simply become so narrow as to be functionally unusable,” said Elizabeth Nash, an expert on state abortion restrictions at the Guttmacher Institute, a reproductive rights research organization. “There are very few people who meet these definitions.”

In another example, should Roe fall, doctors who perform an abortion against state law in Alabama could be face up to 99 years in prison.

“This has the potential to turn the doctor-patient relationship on its head,” said Lewis. Doctors may not feel comfortable advising women they could go to another state to seek abortions, while women may be uncomfortable being open about speaking about her considerations.

What’s more, tough-on-crime laws passed in the nearly 50 years since Roe was decided mean some zealous prosecutors could charge doctors, and a host of other people, with aiding and abetting, conspiracy or accomplice crimes related to the end of a pregnancy.

Abortion bans would also have a dramatic impact on medical education, in particular on residents in obstetrics and gynecology who are required to learn routine abortion care as part of training.

“Largely because of the politicization of obstetric and abortion care, the public sees these as two very different and separate things,” when in fact, “pregnancy management and pregnancy termination are very interconnected,” said Dr Kavita Vinekar, assistant professor at the University of California Los Angeles school of medicine and a fellow with Physicians for Reproductive Health. “A lot of the skills we use in obstetrics are directly related to the training we receive in abortion care.”

A study co-authored by Vinekar found that nearly half (44%) of obstetrics and gynecology residents, or about 2,600 residents, will attend programs in states that could outlaw abortion training.

Already, some programs have pioneered efforts to help residents from Texas, which banned abortion at six weeks in 2021 September, to travel to states where it is legal. But it is not simple or easy.

“I’m trying to think of ways to help, so there are not huge training and education deficits in our workforce, but I am also very nervous about it,” said Dr Jody Steinauer, a co-author of the study and director of the Ryan residency and training program at the Bixby Center for Global Reproductive Health at the University of California, San Francisco.

Additionally, Steinauer said she worries that workforce shortages will threaten pregnant people in states where abortion is banned, because few doctors will want to practice under the threat of prosecution, unable to provide safe, evidence-based care.

“Just the emotional distress factor would be enough to make people not want to practice in these states,” Steinauer said.

Existing abortion restrictions, even as Roe stands, means pregnant people may seek abortion care far from where they live. Verma has seen patients come to Georgia from Alabama and Tennessee, which have more restrictions. However, the threat of prosecution may pose a threat.

“In too many of these cases,” a person who was prosecuted “has come to the attention of law enforcement by someone from whom they’ve sought medical care,” said Jill Adams, executive director of If/When/How, a reproductive rights legal group.

Although anti-abortion lawmakers often argue they exempt women from punitive statutes, laws that confer rights on fetuses have already resulted in prosecutions. Those criminal sanctions are likely to expand should Roe fall.

That was probably the case for Lizelle Herrera, a Texas woman who was charged with murder for a “self-induced abortion”. Charges were later dropped – abortion is legal because Roe remains the law of the land – but historians warn the case is a forewarning of things to come. There is no requirement for healthcare providers to report pregnant people to law enforcement for self-managed abortions, which are legal.

“In a time when we’re trying to end mass incarceration, we will see far more women, far more people of color, far more poor people – these are the people we see getting abortions – being charged with crimes and going to jail simply for exercising what once was their right to determine what to do with their own bodies when it comes to pregnancy,” said Lewis.