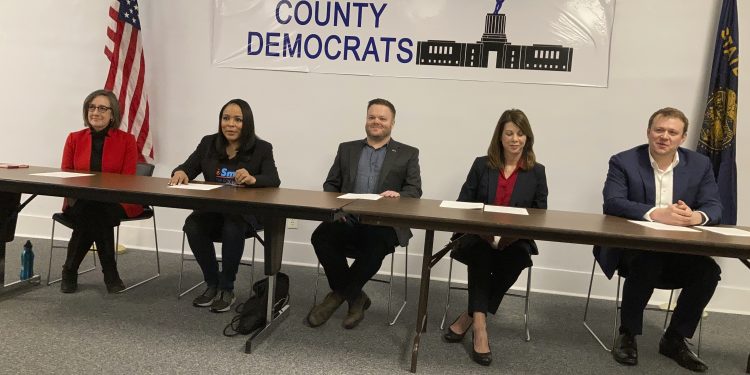 The fallout over HMP’s endorsement of Carrick Flynn comes at an inopportune time for Democrats. At a time when Republicans are making gains with Latino voters, the blowup serves as a reminder of the ongoing challenges and internal Democratic party debate over the efficacy of its outreach to Latino voters.

There isn’t much in Flynn’s resume to explain HMP’s decision to intervene on his behalf in a crowded primary. A political newcomer, Flynn’s campaign bio describes him as a native of small-town Oregon who grew up poor but graduated from Yale Law School. He then worked at Oxford University and Georgetown University before returning to the state in 2020.

The district hasn’t even been targeted by the GOP — under the new lines, President Joe Biden carried it by 14 percentage points.

Latino leaders and progressive strategists complain that they were completely blindsided by HMP’s investment in Flynn, which came a little over a month before the May 17 primary — HMP typically weighs in once a Democratic nominee has been chosen, not before.

“HMP is tasked with defending the House Majority by boosting Democrats and holding Republicans accountable, not with spending critical resources against a woman who has spent decades fighting for progressive causes and who will excite Democratic voters in November,” Rep. Ruben Gallego, chair of BOLD PAC, said in a lengthy statement.

BOLD PAC, the Congressional Hispanic Caucus’ campaign arm, was impressed enough by Salinas to include her in its first slate of endorsements this year. They and other Democrats point to her as an example of a viable Latina candidate with all the right credentials to win in the new Democratic-leaning district.

Part of their argument was that a Salinas victory would send the right signal to Oregon’s growing Latino, predominantly Mexican American, population. And it would underscore the party’s commitment to Latinos in the wake of recent GOP inroads with Latino voters.

If elected, Salinas would be one of only a few Latinas in Congress. Currently, only 13 out of the 435 House members are Latina — less than 3 percent.

“It’s tough to see [given that] Salinas has several endorsements from various different groups in Oregon and across the country,” said Kristian Ramos, a Democratic strategist. “We need to be united now and coalescing around the candidate who can turnout the full coalition of Democratic voters in the state… and you cannot win just about anywhere in the United States without the Latino vote. It is disappointing.”

Salinas, the daughter of a Mexican immigrant, has garnered the backing of top progressive groups, including Planned Parenthood Action Fund and the Service Employees International Union. Oregon’s current Democratic Gov. Kate Brown recently endorsed her, calling her the “progressive champion we need fighting for Oregon families in Congress.”

Six of the Democratic candidates in the primary, including Salinas, responded to HMP’s spending by issuing a scathing joint statement, calling the move “a slap in the face to every Democratic voter and volunteer in Oregon.” A day later, five of them — including Salinas — kept up the united front at a press conference condemning HMP’s decision.

They weren’t alone in expressing their frustration. Sen. Jeff Merkley (D-Ore.), who has not endorsed in the race, called it “flat-out wrong.” One long-time national Democratic strategist called the decision to back Flynn “fucking crazy.”

“This is a highly competitive primary and we have four women in the race, three of whom are women of color,” Salinas said. “I was really surprised that HMP would even think of weighing in this race.”

Those women of color include fellow state Rep. Teresa Alonso Leon, the first Latina immigrant elected to Oregon’s state House, and Loretta Smith, a former county commissioner who, if elected, would become the first Black person to represent Oregon in Congress.

“House Majority PAC is dedicated to doing whatever it takes to secure a Democratic House Majority in 2022, and we believe supporting Carrick Flynn is a step towards accomplishing that goal,” said CJ Warnke, HMP’s communications director.

In 2022, so far, House Majority PAC has announced plans to spend more than $101 million on television and digital ad reservations ahead of the midterms. Of that total, about $1.3 million — about 1 percent — is being spent on Spanish-language ads. Those ad buys are in Fresno and Bakersfield in California and in Harlingen, Laredo and San Antonio in Texas.

Without much clarity on why, specifically, HMP viewed Flynn as the candidate best suited to win the race in November, rival campaigns have been left to speculate as to the super PAC’s motivation. Some of the campaigns and Democratic strategists have raised questions over whether the decision is connected to the heavy support Flynn has received from the super PAC Protect Our Future.

Backed by Sam Bankman-Fried, the 30-year-old billionaire co-founder and CEO of cryptocurrency exchange FTX, Protect Our Future has previously said it intends to back Democrats “who take a long term view on policy planning,” especially as it relates to pandemic preparedness and prevention. The super PAC has already spent millions backing other Democratic congressional candidates, such as Rep. Lucy McBath in Georgia, Rep. Shontel Brown in Ohio and Jasmine Crockett in Texas.

In their joint statement, the six candidates pointed out Bankman-Fried’s heavy spending in support of Flynn comes “at a time when the cryptocurrency industry seeks to increase its influence in Washington.”

“House Majority PAC’s troubling decision to meddle in a Democratic primary in support of this candidate begs the question: With so much needed to defend the House, how can they afford involvement in a primary? Why is this happening? Where is this money coming from? And what does its source want in exchange?” they said in the statement.

The Protect Our Future super PAC has already spent more than $5 million on Flynn’s behalf, including more than $2.4 million on television ads, according to Federal Election Commission filings.

Asked about the criticism from other candidates, Flynn’s campaign manager Avital Balwit said in a statement to POLITICO: “Carrick has avoided getting swept up in the media cycle. Carrick believes in connecting with the voters in the 6th district and their priorities. He is running a positive campaign focused on jobs, stability, and preparing for the future – he thinks that is what the voters deserve.”

Flynn told a local newspaper he doesn’t know how he received Protect our Future’s backing and has not been in direct contact with the super PAC.

There has been no public polling on the race for the new House seat, but two long-time Oregon-based Democratic political insiders said they weren’t completely surprised to see HMP betting on Flynn given the sheer volume of mail they’ve received on his behalf and ads they’ve seen.

HMP’s first two ads in support of Flynn went on the air Tuesday. One featured a childhood friend talking about how a flood had destroyed his home, leaving him homeless — and sharing Flynn’s plans to tackle climate change and invest in clean energy jobs. The other featured the owner of a local boxing gym calling Flynn a fighter who would be in Oregonians’ corner.

Salinas’ campaign also aired its first television ad on Tuesday, a spot that talks about how her father worked in the fields, her successes as a state representative, some of her biggest endorsements and her desire to “fight for a stronger future for Oregon.”

Ramos, the Democratic strategist, said HMP’s decision to throw its weight behind Flynn underscores the need for a strong Latino turnout in the midterm elections — and for Latino candidates to keep running for office.

“Speaker Pelosi often tells candidates, ‘Power is not given, it’s taken,’ he said. “Well, this is an opportunity for our candidate to take power.”