A sparkling highlight of the family-friendly Yorkshire festival scene 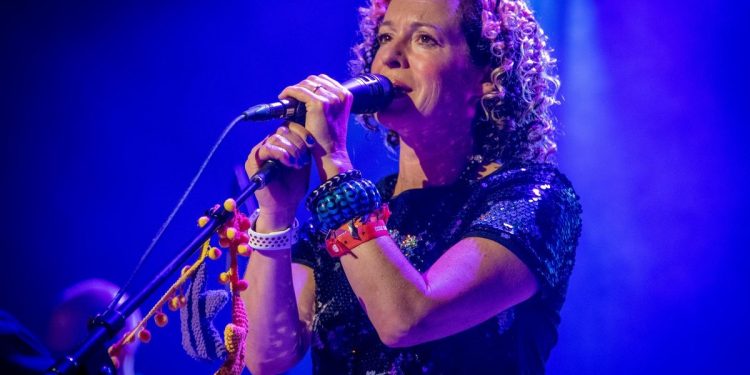 The festival, at Cinderhill Farm in Barnsley, truly does have something for everyone – from baby and toddler tents, crafts and activities for children of all ages, live music, art, performances, a wide selection of delicious food – and even the Euro 2022 final for the football fans!

It was also a great festival for equality and diversity. All three headliners were female (Imelda May, Kate Rusby and Suzanne Vega) and there was a 50-50 gender artist split too. The acts were back under the Big Top tents, after going outdoors last year due to the pandemic.

And of course, the England Women’s team won the final at Wembley against Germany!

Event organisers had set up a television screening the match in the bar area and, while my daughter and I didn’t watch it due to everything else going on, it was great to hear the cheers as our team scored and eventually won the game.

Underneath the Stars also has the Attitude is Everything Silver Level Charter Award for improving deaf and disabled people’s access to music and live events.

For families, the festival has all sorts.

The new Odditorium big top was a great addition – although the puzzles and challenges did leave us frustrated at times, but we refused to give up and eventually cracked them all. My daughter tried out several of the arts and crafts sessions in the over eights tent, including wire flower making and junk modelling – we are now the proud owner of a giant dalmation rabbit!

Imelda May. By Bryan Ledgard.

Our favourite storyteller Mark Fraser was back with his ‘slightly spooky’ tales while the walkabout performances (especially the Lollipop Patrol and Mr Stretch and Mr Armstrong) gave us both a good giggle as they patrolled the site.

There was also a tent with more suitable activities for under eights, and a baby tent with colourful play toys and changing areas.

The camping areas are ideal for families too – there’s no lugging your stuff for miles across a field because your car is parked close by. This also allows you to lock away any valuables, enabling you feel better about security, an issue we’ve had at other festivals previously.

Underneath the Stars Festival

The portaloos are always clean and well stocked, and there’s plenty of food options for all diets including vegetarian and vegan – everything from pizzas to puddings, from pie to Thai, and from the tea tent to burgers, fries and hotdogs.

Importantly these days, the festival is looking to reduce its carbon footprint too. There’s no single-use plastic glasses, instead you can bring your own or pay £2 for a reusable one, and there’s discounts if you bring your own cup for hot drinks. I think the festival’s whole ethos paid off – volunteers only collected one small bag of rubbish from the entire site after four days, a sure sign of respect.

Of course, since it was a music festival, we have to mention some of the great acts we were lucky enough to see and hear over the weekend.

Underneath the Stars Festival

It was the first time I’d seen Friday’s headliner Imelda May but she was fabulous. On Saturday, the world-famous Yorkshire band Brighouse and Rastrick Brass Band put on such a fantastic show, as did the Bar Stewards of Val Doonican – their Goat Yoga song had us laughing and singing along in no time. We also, as always, enjoyed Kate Rusby, who was celebrating 30 years of touring.

We had so much fun on Saturday that we didn’t think it could be topped.

And then Sunday came along. Jason Manford was very funny, and we adored hearing him duet with Kate – only topped by his primary school assembly song mix up, which really was something to see as the crowds danced and sang along to universally-known assembly tunes. The Young Uns and Damien O’Kane with Ron Block were also memorable for all the right reasons.

All-in-all, we couldn’t have enjoyed the weekend any more than we did.

Underneath the Stars will be back next year on Friday, August 4 – Sunday, August 6.