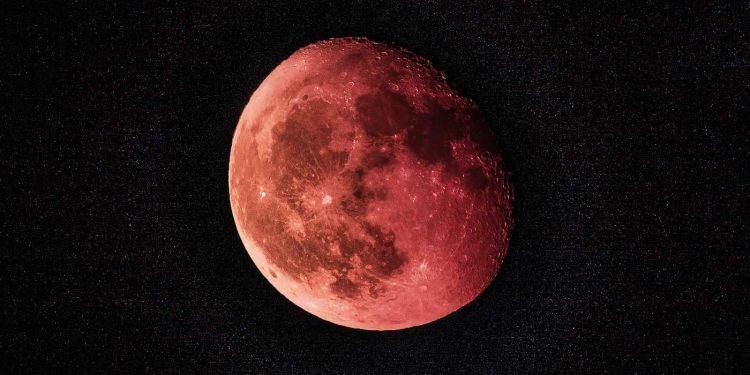 Night sky fans, on May 15-16 look up to see the blood-red spectacle that is a total lunar eclipse.

A lunar eclipse occurs when the full moon slips into the Earth’s shadow—and those watching from South America and the eastern side of North America are in for quite the show.

If you’re an eclipse hunter living in North America’s west, or in Africa or Europe – you’ll also get to experience real beauty in the shape of not a total, but a partial lunar eclipse.

Such an eclipse can be a wonder to see, as it gives viewers the chance to witness the Japanese Lantern Effect—according to Farmer’s Almanac, in such moments the surface of the moon appears the color of glowing copper, gradating down to a beautiful “uneclipsed yellow sliver.”

To get precise times for the eclipse spectacular where you are, TimeandDate.com has you covered. Of course, as this is a lunar rather than a solar eclipse, you don’t need to worry about damaging your eyes by looking up.

And if you miss this one? Not to worry. The next will occur on November 7th-8th, 2022. We’ll be sure to remind you of that event in advance.

A day after the upcoming eclipse, on May 18th you’re in for another mid-month treat, as the rare conjunction of Mars and Neptune is made visible in the pre-dawn moments.

Mars is easy to spot, being tangerine-red, and on the 18th, Neptune will be just 0°34′ north of it—with binoculars or a telescope, you’ll easily be able to go planet hopping and get a closer look at that distant Big Blue Planet.

See you in the nearest dark sky location near you.