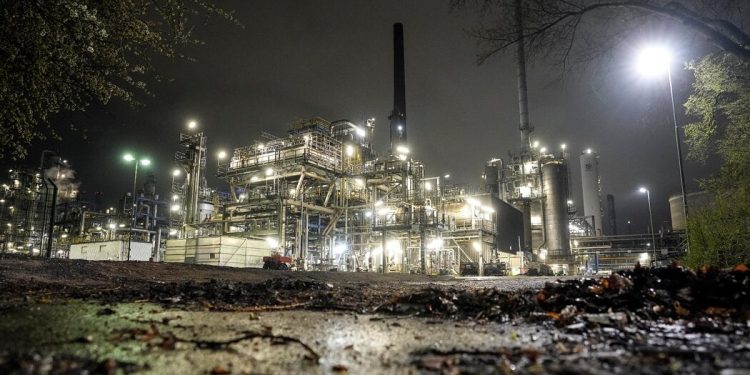 Russia’s suspension of natural gas service to Poland and Bulgaria won’t do immediate damage to the European economy, but Europe could face a sharp slowdown of growth if the cutoff spreads to other countries — or if Europe imposes an embargo on Russian gas, economists said.

Russia’s war on Ukraine is already rippling through Europe, lashing energy prices and hurting manufacturers just as the bloc was recovering from a pandemic-induced recession. The International Monetary Fund last week cut its 2022 forecast for the countries that use the euro to 2.8 percent, from a 3.9 percent estimate in January, with Germany, the largest economy, taking a big hit.

The euro fell Wednesday below $1.06 for the first time in five years on rising concerns about energy security and a slowdown in European growth. The currency has slumped nearly 4 percent against the U.S. dollar in April alone.

The action this week by Gazprom, Russia’s oil monopoly, to turn off the gas taps to two European Union nations was unlikely to tip Europe into a fresh recession immediately. This is in part because Europe “still has many diplomatic and fiscal policy responses available” to combat one, said Mark Haefele, chief investment officer at UBS, in a note to clients.

But the specter of an outright energy war — including a potential European embargo on Russian gas and oil — is looming at a vulnerable time. European companies are already facing higher energy costs, which are threatening profit margins and squeezing consumers’ purchasing power, analysts said.

“This is a thinly veiled threat to Germany— Berlin is currently weighing how far it and the E.U. can go in sanctioning Russian energy exports, and the Russian threats are directed to change its calculus,” said Jonathan Hackenbroich, a policy fellow at the European Council on Foreign Relations.

Still, a full gas cutoff for Germany “would have dire consequences for the German and European economies,” he added. “Factories would have to curb production or even close. Some key industries could be lost forever, and it is in fact hard to assess the full range of consequences. But Russia is also highly dependent on revenue from energy exports, as they represent its last big lifeline.”

An embargo on Russian energy is likely to trigger a European recession, and high inflation “would become even higher inflation,” said Carsten Brzeski, global head of research at ING Bank.

“All of this is clearly negative for the short-term outlook,” he said. “But to make it worse, high energy and commodity prices and disrupted supply chains will all put Europe’s international competitiveness at risk.”

Shortages of essential metals. The price of palladium, used in automotive exhaust systems and mobile phones, has been soaring amid fears that Russia, the world’s largest exporter of the metal, could be cut off from global markets. The price of nickel, another key Russian export, has also been rising.

Financial turmoil. Global banks are bracing for the effects of sanctions intended to restrict Russia’s access to foreign capital and limit its ability to process payments in dollars, euros and other currencies crucial for trade. Banks are also on alert for retaliatory cyberattacks by Russia.

Germany’s five leading economic research institutes said this month that a full energy embargo, were one to be enacted immediately, would reduce annual economic growth in the European Union this year and the next by a cumulative 3 percent, while raising inflation roughly 1 percentage point in both years.

That is because natural gas would probably have to be rationed as of the start of next year, and parts of European industry “would then have to be switched off for four months to enable households to still heat their homes during the cold season,” Holger Schmieding, chief economist at Berenberg Bank, said.

He said it was “at least conceivable” that rationing could begin even earlier in the event of an immediate Russian gas cutoff.

“My best guess remains that the damage to European growth would be quite serious,” Mr. Schmieding said. “Whether or not it would be a price worth paying to constrain the ability of Russia to sustain a long war is ultimately a political judgment that goes well beyond a mere economic calculus.”