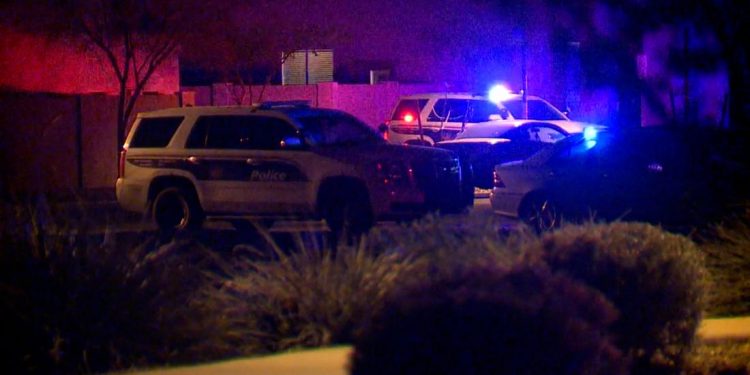 The nine officers are among 15 law enforcement officers injured in separate shootings across the US in the last 24 hours, according to a CNN tally.

“Enough is enough!” National Fraternal Order of Police (FOP) President Patrick Yoes said in a statement, noting last year was one of the most dangerous for law enforcement since the FOP began keeping records.

In Buckeye, west of Phoenix, an officer responding to a report of a shooting was invited inside a home by a suspect who then “ambushed” the officer with gunfire while still outside the house about 2:15 a.m., according to Sgt. Andy Williams, a police spokesman.

The officer was struck multiple times but managed to retreat and call for backup, Williams said.

A man then came out of the home holding an infant and placed the baby on the ground before he was detained, according to Williams.

The suspect inside the home then opened fire on other officers — striking four of them — as they attempted to bring the infant to safety, Williams said.

Four other officers were struck by bullet ricochets or shrapnel, but stayed at the scene, according to Williams.

Williams initially described the woman as being “extremely critical” but later reported that she had died.

The man who carried out the infant was not part of the ambush, Williams said, adding the investigation is in its preliminary stages.

The gunman barricaded himself in the home after the officers returned fire, according to Williams. He was later found dead.

The responding officer and the other four shot right after him sustained non-life-threatening injuries.

“Please continue to pray for the five Phoenix Police officers injured this morning. Our men and women in blue work day and night—no matter the circumstances—to protect our state from danger. Their unwavering courage & sacrifice helps to keep us safe. Arizona is deeply grateful,” he wrote.

“If I seem upset, I am,” the police chief told reporters. “This is senseless. It doesn’t need to happen. It continues to happen over and over again.”

Chief Williams tweeted later Friday: “I am so proud of the courageous men and women of @PhoenixPolice. 5 officers were shot and 4 others injured in an act of violence that critically injured a woman. While they heal from their wounds, their brothers and sisters in blue will be back out there answering when you call.”

Williams, the police spokesman, said the infant is safe. He said the woman was the former girlfriend of the suspect and the infant was their child. 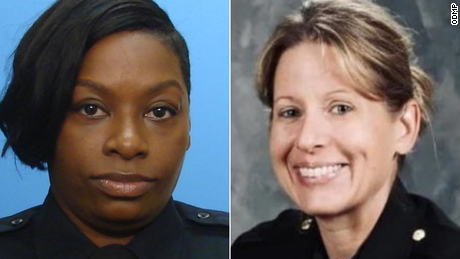 Yoes said the shootings over the last 24 hours were “a stark reminder of the violence our officers encounter in every community.”

“Our officers are not just in harm’s way due to the dangerous nature of their profession but are too often targets of cowardly individuals whose sole motivation is to injure or kill a law enforcement officer,” he said in a statement.

Yoes said 55 officers have been shot so far this year.

“It is incumbent upon our elected officials and community leaders to stand up and speak out against the violence against law enforcement officers,” he said.

In western Maryland, two police officers were shot and wounded after responding to a call about a suspicious man with a firearm just before 1 p.m. Friday in the city of Frederick, Police Chief Jason Lando told reporters.

The officers approached the suspect in a “non-confrontational manner” before the shooting, according to Toff Wivell, a spokesman for the Frederick County Sheriff’s Office. The suspect’s weapon was recovered, he said.

The officers — identified by Lando as Bryan Snyder, 43, a two-year veteran, and Kristen Kowalsky, 32, an officer for nine years — as well as the suspect were flown to the R Adams Cowley Shock Trauma Center in Baltimore, according to Lando.

The officers were wearing body cameras but the footage has not been collected, Lando said.

The suspect was identified as 25-year-old Dominique Lemarr Lewis, police said. He was recovering from surgery.

“It’s a tough time right now to be a police officer and I’m very proud of the work that they do,” Lando said, calling violence against officers “very disheartening.”

Both officers, who were shot in the torso, were stable and awake, according to Dr. Thomas Scalea, physician-in-chief at the trauma center.

“That’s nuts that there is so much violence in the city and the state,” he said. “This is out of control. It’s so demoralizing to do this day after day.”

Maryland State Police are assisting with the investigation.

Lockdowns at several schools in the area have been lifted, according to a tweet from Frederick County Public Schools.

In New Mexico, authorities are looking for a man and a woman who allegedly shot a State Police officer Friday morning, according to the State Police.

The officer is in stable condition, police said.

State Police describe the suspects as a heavy-set 5’2″ to 5-4″ male wearing black pants and a blue hoodie, and a thin 5’7″ female in a tan shirt with black leggings.

No details of the shooting have been provided.

In Philadelphia, a police SWAT officer was shot Friday afternoon while law enforcement authorities were serving a warrant, Police Commissioner Danielle Outlaw told reporters. The officer was wearing a bulletproof vest and was discharged from Temple University Hospital after receiving treatment.

CNN’s Amanda Musa and Hannah Sarisohn contributed to this report.

What Is Trimetazidine, and Would It Have Helped Kamila Valieva of Russia? – The New York Times

How To Attract Real Estate Business Instead Of Chasing It

How To Attract Real Estate Business Instead Of Chasing It