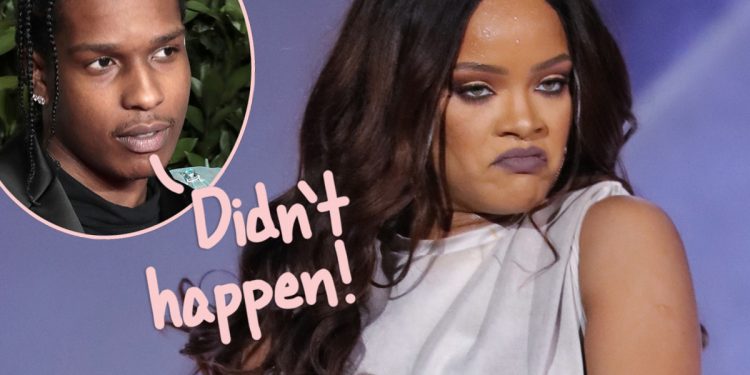 
So, about those cheating rumors following A$AP Rocky around this week…

Perezcious readers were SHOCKED on Thursday evening when we posted details about an allegation going around that the rapper had supposedly been caught cheating on Rihanna. The claim went that the pair had supposedly split after Rocky allegedly cheated with Amina Muaddi, a high-profile shoe designer for Rihanna’s Fenty brand.

There were plenty of people (rightfully) skeptical of the allegation when it first came out — in part because it was publicized on the heels of RiRi’s Vogue layout in which the pregnant pop superstar gushed about her man. And now, it would seem as though the rapper is working overtime on damage control with an insider-leaked denial!

Related: Rihanna Says Her Mothering Style Will Be ‘Psycho’ Like THIS ‘Real Housewives’ Star!

According to TMZ, a source close to the couple is speaking very specifically about the rumors. In the insider’s explanation of the situation between the high-profile pair right now, it sounds like there’s not much doubt about the apparent lack of truth in those cheating allegations and the breakup banter:

Seriously, though, it’s a pretty significant insider denial considering how quickly this claim bubbled up in the social media sphere. Rihanna and A$AP were the focal point of Twitter trends throughout the day on Thursday after things first blew up amid the cheating claims.

Related: Rihanna Recalls How ‘Hard’ It Was To Keep Her Pregnancy A Secret From Friends!

All these infidelity allegations are doubly dramatic now since the Rude Boy singer is having a child with A$AP very soon. After first getting together in November of 2020, the duo conceived late last year and are now expecting. They have also — up until this point, at least — apparently been thinking about their long-term future as a couple.

Acknowledging all this context, we were seriously shocked by these allegations! Like we noted (above), it’s surprising in part because of the Barbadian beauty’s recently-released Vogue spread. In it, she speaks sweetly about the NYC-born rapper’s rise to a romantic role in her life, telling the fashion mag:

“People don’t get out of the friend zone very easily with me. And I certainly took a while to get over how much I know him and how much he knows me, because we also know how much trouble we can land each other in.”

And she added more thoughts about how transparent the partners have supposedly been with each other:

“What I love the most about us? Transparency with everything: how we’re feeling, what our goals are, what our fears and insecurities are. The vulnerability to be able to say what you feel about each other.”

So is it possible things went from that good to this bad in a matter of days?!

Hey, anything is possible, we suppose. But this new insider denial claiming the cheating allegations are “1 million percent not true” is definitely a strong pushback against the rumors.

What do U think, Perezcious readers??

From a molasses flood to ‘Titanic,’ 6 podcasts that offer a glimpse into kids’ minds