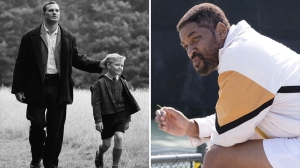 See the full winners list below and check out a highlights reel above.

Nicole Kidman took home the Best Actress trophy for Being the Ricardos, and The Power of the Dog’s Jane Campion continued her awards-season hot streak with a win for Best Director. Tony Kushner danced off with the Best Screenwriter prize for West Side Story, and Jared Leto was fitted for the Supporting Actor award for House of Gucci.

On the small-screen side, Ted Lasso kept its streak alive a win for Best TV series, and Mare of Easttown won for Limited Series. Hacks’ Jean Smart and Dopesick‘s Michael Keaton scored Best Actress and Actor, respectively. All four also won their categories at the Critics Choice Awards a week ago.

“We are thrilled to share this year’s Movies for Grownups Awards honorees during our 20th anniversary special,” said Tim Appelo, AARP film and TV critic. “Even in a pandemic, creators continue to raise the bar, captivating audiences and giving us all a bit of solace during trying times. Twenty years is quite a milestone to celebrate, and we wish all our nominees and honorees a heartfelt congratulations.”

Best Director
Jane Campion (The Power of the Dog)

Best Documentary
Summer of Soul (…Or, When the Revolution Could Not Be Televised)