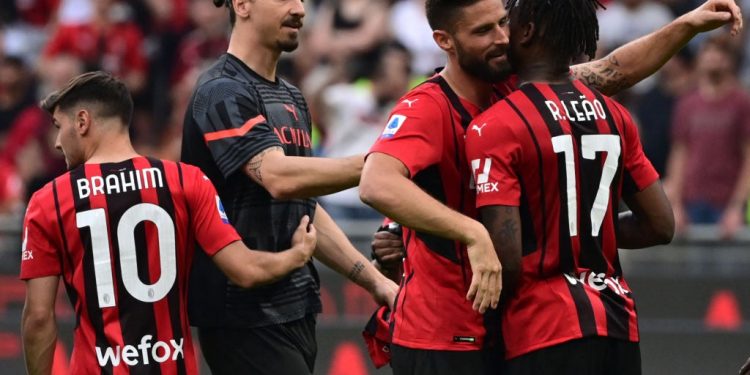 One game away – that’s all that stands between AC Milan, the most storied club in Italy, and ending their wait of more than a decade to become league champions again.

Stefano Pioli’s team visit Sassuolo on Sunday and it is there, at the Mapei Stadium Citta del Tricolore, that they will attempt to earn the single point they need to ensure Inter Milan cannot catch them, regardless of their result on home soil against Sampdoria.

The Rossoneri are two points clear of their rivals, who are the reigning champions, but with Serie A decided on head-to-head results, a quickfire Olivier Giroud double in February would prove crucial if they end up level.

Milan’s long, slow return to claiming the Scudetto, if indeed they do, has been a while coming. Under Pioli they have gradually got closer each time, at least pushing to win last year and on the verge of achieving it this term – which makes it all the more remarkable that this title tilt almost never happened at all.

Ahead of the 2020/21 season, Pioli was facing the sack. So too would club legend and sporting director Paolo Maldini depart, with Ralf Rangnick widely reported to be on the verge of taking over both roles, ready to rebuild Milan in his own style.

Ultimately, Rangnick’s demands for club-wide influence and an apparent clash with Maldini meant that move never went through, Pioli stayed and duly began to plot his way to the top. Last season, Milan were first until mid-February, but the final third of the campaign was a step too far for the consistency levels required and they finished runners-up, some 11 points behind Inter.

This time around they have stuck to the task rather better, in no small part due to having the joint-best defensive record in Serie A.

Nothing can ever be taken for granted, but the celebrations at the end of their penultimate fixture – a hard-fought 2-0 win over Atalanta – certainly belied the fact the players as well as the fans believed the toughest task had been overcome and now it’s just a case of seeing it through without any errors.

The side Pioli has built is well-balanced, tactically consistent and several parts have been together for a few years now. Yet it’s also fair to say that this might be the final chance for this version of the team to finally claim the title. Several core components of the past few years are somewhere between ‘likely’ and ‘certain’ to not be in the Milan line-up next term.

Zlatan Ibrahimovic is out of contract this summer, with a new deal not yet signed. Franck Kessie too, and he’s expected to join Barcelona. Simon Kjaer and Ante Rebic have been mainstays previously, but injury and form of others have seen them less-involved. Alessio Romagnoli is another likely to leave, having also been displaced as guaranteed starter and most recently linked to Chelsea.

Yet this is far from reason to feel Milan will be a one-season-wonder.

Regeneration of the team has begun successfully and already in the past few years they have dealt well with the departures of some vital first-team names: just last summer Gigi Donnarumma and Hakan Calhanoglu left on frees. In seasons prior to that, each of Suso, Lucas Paqueta, Leonardo Bonucci and Manuel Locatelli had all left, some after bigger impacts than others it’s fair to say.

But remaining firmly in place is the magnificent Theo Hernandez, the rampaging left-back with a new deal freshly signed and a goal of the season contender netted last week to see Milan a huge step closer to the title. Rafael Leao has taken massive steps forward with consistency this season and has two more years on his own deal.

Those two in particular have been enormous reasons for Milan’s resurgence as a title challenger.

Sandro Tonali, Fikayo Tomori and Mike Maignan can all be part of the team’s spine for years to come, while Divock Origi is expected to arrive on a free this summer from Champions League finalists Liverpool, adding to the attacking options.

Even so, AC Milan’s immediate future is somewhat clouded by uncertainty.

There is a takeover in the works, but who will end up buying the club is unclear: Bahrain-based fund Investcorp have at least halted talks, perhaps indefinitely, while RedBird Capital – who are shareholders in Liverpool owners FSG – are reported to be in talks over a deal worth between €1.3-1.8bn (£1.1-1.5bn).

With a new stadium also on the way, Pioli having one year left on his contract and the again-growing threat of Juventus’ own re-rise domestically, there’s no telling what the near-term future of Italian football might look like – even without considering the national team’s dismal failure to reach the 2022 World Cup.

It makes it all the more relevant and important that AC Milan fans, players and everyone else involved are focused on nothing more than 90 minutes in Emilia-Romagna on Sunday, where heroes can be set in stone, memories of a lifetime created and a decade of disappointment can be finally washed away.