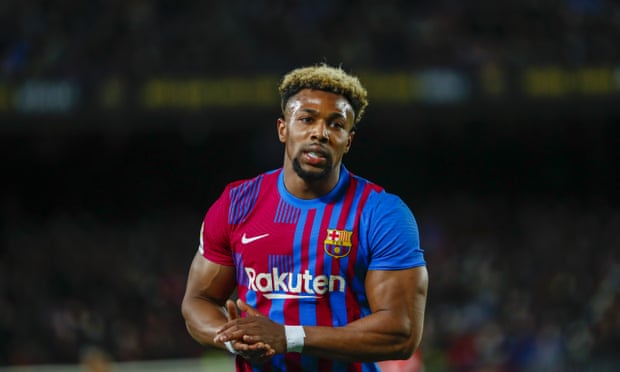 
In the buildup to Barcelona’s Europa League meeting with Napoli in February there was a team talk, just not about tactics this time. They informed their opponents for a start, and this was bigger, the players discussing it in the dressing room and agreeing they would try something new: they were going to take the knee. Six years since Colin Kaepernick had first done so, two after Premier League clubs followed suit, it was the first time a top-flight Spanish club kneeled. It was also the last, at least in the men’s game.

The idea came from a Barcelona player born right next to the Camp Nou who had spent the previous six years in England. On loan at Barcelona then, Adama Traoré has just finished training at Wolves now as he settles in front of the screen. It is the evening before the Premier League captains announced they would now take the knee only at specific fixtures, which doesn’t mean walking away. Here or there. “Taking the knee matters and it was good a Spanish team did it,” Traoré says. “It’s a way of explaining the need to fight.”

Explain is a word Traoré returns to often. Education, too. At heart, he says, it is about empathy. It is also about understanding and his experience is instructive, brought to the Camp Nou that night and to Common Goal’s anti-racist project now. Common Goal celebrates its fifth anniversary on Thursday and Traoré is joining its initiatives against discrimination that include training for club executives, fan activities and local community projects for integration. “For me, it’s about having the opportunity to explain, to find out why people think that way. And from there, act.”

That night there was applause from the Camp Nou but the gesture did not get repeated in Spain beyond a handful of players on European nights. Some Spanish teams in Europe have been caught out at kick‑off, not anticipating opponents kneeling. Some Atlético Madrid fans whistled Liverpool for taking the knee. Suggestions that the national team kneel at Euro 2020 brought opposition. They never did, something the far-right, anti‑immigration party Vox celebrated by tweeting: “While some kneel, a patriot stays on his feet.”

Asked about the rise of the populist right, not just in Spain, Traoré responds: “It’s a reality. Racism is there. There are people who are racist who still promote the idea that the fact that you have a different colour of skin makes you inferior.” And yet he doesn’t so much see a conscious rejection of anti-racism measures, at least not in football grounds. Nor is it about a single country, although he says the degree of awareness and sensitivity is higher in England. These, after all, are processes, generations. England, too, experienced an outbreak of supporters whistling players taking the knee.

“I don’t think it’s resistance,” the 26-year-old Traoré says. “I think it’s a lack of understanding, explanation, culture, empathy. Maybe they don’t reject taking the knee exactly; maybe they don’t know, don’t understand or think it’s nothing to do with them. Taking the knee started here; maybe eventually it will reach Spain. The response might not be the same [everywhere] but it’s important because the action brings explanation: it’s important to educate, especially kids. It’s hard for people who haven’t experienced racism to have empathy. So you explain, tell stories, things you have seen and heard, suffered.

“There was a talk with Rio Ferdinand and I remember telling him about a physio’s son. He’s a kid, he doesn’t know, but you see people you admire so you ask: ‘Why’s my favourite player kneeling?’ So the dad explains: the kids at your school from other ethnic groups or different skin colours are the same as you; they’re not inferior. But racism is a reality, so they take the knee because of this, this and this. That’s the need.”

Traoré’s parents came to Barcelona from Mali in the 1980s, his father working in the Nissan factory. They lived in Hospitalet, one of the most densely populated neighbourhoods in Europe and among the relatively few places with a significant immigrant community at that point.

“When I was young, you would go to discos in Barcelona and find black people couldn’t get in. At school certain people who would be: ‘Black people, no.’ You were separate, outside. Comments like ‘blacks don’t smell good’, all sorts of things, prejudices,” he says.

“I’m Spanish, I feel Spanish and I have Spanish culture, but I also have the culture of my African heritage through my parents. For me it is easier to understand those two but people don’t have that. People are carried along by what they’re told, or the telly. If you actually go to Africa, say, you see something different to the way it’s ‘advertised’, [with] images of poverty and problems.

“You’re a kid, you don’t understand it. Why? Why am I being treated like this? Why do I have to hear ‘monkey’, ‘nigger’, ‘black sh …’? It’s a reality you live with. The first time it happens, you can’t believe it. It’s surreal, you know? You grow up, live with it: some fight, some let it go. My parents always said: ‘You have to be strong, that’s the life we have today, but it will change. You can’t ever feel inferior.’ They told me to be who I am, that I’m beautiful. But there are kids for whom it is a trauma, who can be sunk, who feel ugly, rejected, go so far as to try to change their skin or their traits because they don’t feel accepted. That’s important: to make people see that there’s the act, sure, but to see consequences too, the damage it does. And to educate those kids that suffer racism too, help them understand.

“I’ve experienced it in football,” he continues. “Monkey chants. My brother too: they called him all sorts. But that guy was punished – and that’s important. Bit by bit stricter measures are being taken and with time it gets better. But we still have to fight.”

What’s the best response to abuse on the pitch? To walk off? “In England they do something important: identify and find the specific person. The people alongside him are not responsible and shouldn’t pay. But there is a moment when captains can intervene, when it’s not just one but many: go to the dressing room or report it to the FA. And then if sanctions are taken against clubs, they will act, be careful about who attends. The best punishment for me, apart from bans and so on, would be classes. Understanding, education. Why did you do that? I’m not in favour of hate meeting hate.

“There are people who think ‘this isn’t about me’ but this is everyone: what you do affects others. Some people who suffer racism think: I’m not going to protest any more, because it doesn’t get anywhere. I’ve met lots like that, people who don’t even call it out any more.”

The decision to take the knee only before certain games was driven by a concern that it could have lost its impact as a gesture, becoming empty by routine. “There are people who don’t like it, or just aren’t interested. Others who will do so, up to a point. Others who think it’s fashionable and as long as that’s the case, fine. Some go along with it because everyone is, even if they think differently,” he says.

“Some think it’s ‘political’ and don’t want to look beyond that. It’s such a broad movement that all sorts of things can become caught up in it but it makes no sense to use that to cover what it really is. The message: that’s the thing to take with you. Some say: ‘Don’t you think the knee is going on too long?’”

And what do you say? “I say: I understand that. You haven’t lived it, you haven’t suffered it daily. Some people don’t know what racism really is. But if people ask, you can explain. Racism is still a live issue, a reality. We have to take the knee, talk, educate those who don’t get it and those who suffer it. And there’s something that’s really important: what can you do? What can you personally do to improve the world? That’s where the change starts.”